What are the alternatives to our broken direct provision system?

Direct provision is already a chapter in Ireland’s dark history of institutional living. More of the same fails us all

June 17th, 2018: Over 20 asylum-seekers granted permission to remain in Ireland are at risk of becoming homeless when a direct provision centre in Dublin closes on Wednesday. 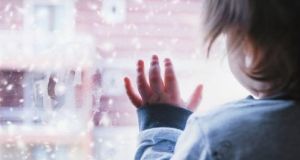 Around 61,100 people have been accommodated in direct provision since 2000. Photograph: Getty Images

Direct provision is broken, condemned by politicians across the political spectrum, international organisations and, most importantly, by residents themselves. Geoffrey Shannon, the special rapporteur on child protection, called for it to be abolished in his recent annual report. Its failures have been vividly demonstrated through Melatu Uche Okorie’s book Hostel People and the TV show Taken Down.

So how do we end direct provision, what is the alternative and how do we get there?

Minister of State for Justice David Stanton repeatedly says he has not heard of a better system. These are some ideas.

In short, we need to shift to long-term, strategic thinking, and away from a reactive “managed emergency”-style system that relies on private operators. Even in the middle of the housing crisis solutions exist.

Housing experts should be consulted and sought for input. Philanthropy, faith groups, developers and business should also be encouraged to become involved

We then have to accept that providing asylum and accommodation is a positive and important part of being a modern democracy that respects human rights.

An average of 2,290 people per year have claimed asylum in Ireland over the last 10 years. This is an entirely manageable number, but the majority have no means to pay for accommodation or family to rely on. Around 61,100 people have been accommodated in direct provision since 2000. If direct provision ends, something has to take its place.

Responsibility should be shifted away from the Department of Justice. It does not have the knowledge of housing or sufficient power and influence in housing policy circles.

The budget and control of accommodation for people seeking asylum should be ringfenced but mainstreamed into wider housing policy. Housing experts should be consulted and sought for input. Philanthropy, faith groups, developers and business should also be encouraged to become involved. Partnerships and consortiums that leverage the unique attributes of each will be crucial.

Non-profit housing bodies should be incentivised to become providers of accommodation, with other organisations providing bolt-on services. Social housing funding streams, such as the capital assistance scheme, should be amended to allow for asylum accommodation to be a small percentage of social housing developments.

Tenders for asylum accommodation should also be designed to attract the interest of these housing bodies. Longer contract duration, with funding for capital and conversion costs, should be introduced.

The government has built only three accommodation centres in 18 years. In those years, over €1.2 billion has been paid to private providers of accommodation

Tenders should also allow for longer lead-in time. Currently providers are required to provide accommodation at short notice, which puts off bodies who may require time to convert properties. The tenders should also be sufficiently broad to accept different types and sizes of accommodation so we move away from congregated settings.

The government has built only three accommodation centres in 18 years. The majority of existing centres were originally designed for other purposes. The State should procure fit-for-purpose accommodation to meet particular needs. This will be a cost-saver in the long term: in 18 years over €1.2 billion has been paid to private providers of accommodation. Spending money on providing people with asylum is a good thing, but it should be done strategically to the benefit of people and the public.

Adequate living space is crucial, and will distinguish any new system from old. Own-door accommodation and self-catering facilities to ensure autonomy, privacy and dignity are a necessity. These sound like big asks but are achievable if planned.

New standards on direct provision point us in the right direction, but are based around the current system of grouping people together in centres. We should start with the vision of what we want and work backwards rather than incremental improvements to an existing system.

Accommodation should be within reach of an urban centre with transport links available. Local communities took the lead in offering welcome and support, as demonstrated in Moville and Roosky, after attacks there. But some centres are too far from the essential services that a person in the asylum process needs to access.

A matrix that considers issues like local services and accessibility to Dublin should be developed to test whether a particular area is appropriate .

Direct provision is more than accommodation. Changes, many involving little or no spend, can improve the system. The migrant integration strategy should be extended to include people seeking asylum from their arrival. Scotland has successfully implemented this model under the New Scots strategy. The strategy should also be amended to include actions on housing.

Supports and services should be available to assist people to transition from accommodation when they have regularised their status. Some 700 people currently live in direct provision but cannot leave because of the housing crisis.

A broader right to work is also needed. Only around 6 per cent of people in direct provision are working. Through work people can become independent and move on.

Delays continue to afflict our asylum procedure. Claim asylum tomorrow and you will be waiting for at least 12 months before being called for an asylum interview, and there is a backlog of around 4,000 cases.

Delays could be reduced by streamlining the application procedure, more resources given to the International Protection Office and more legal advice at the beginning of the procedure to have people recognised as refugees quicker.

Direct provision is already a chapter in Ireland’s long and dark history of institutional living. Now is the time to think big and change. More of the same fails us all.

Nick Henderson is chief executive of the Irish Refugee Council