Sinn Fein remains ever the apologist for the Provisionals 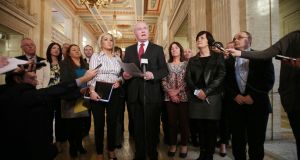 The single most consistent feature of the peace process has been the fact that every time the Provisional IRA is challenged, Sinn Féin attacks the motives of its accusers.

For Sinn Féin there is never an issue that cannot be dismissed by attacking others for just being interested in elections. No matter how comprehensive the evidence of financial irregularities, child abuse, murder or criminality by some involved in the Provisional movement, Sinn Féin responds with blanket denials and abuse of the accuser.

For those who buy into Sinn Féin’s narrative the implication is that even 21 years after the first ceasefire and 17 years after the Good Friday agreement, no matter what the Provisional movement does you should shut up.

Eugene McEldowney’s article here last Saturday unfortunately repeats the core argument that those raising issues to do with Provisional IRA criminality and the behaviour of Sinn Féin are just playing politics. It also includes a good bit of inaccurate history in an attempt to justify the fact that the Provisionals’ movement is still an issue today.

No party in Dáil Éireann devoted more time and political energy into the peace process than Fianna Fáil. Albert Reynolds and Bertie Ahern in particular took risks to find a way to bring into democratic politics people who had waged a bloody and illegitimate campaign in the face of the overwhelming and repeatedly expressed opposition of the Irish people. In Opposition we have maintained an active engagement with the challenge of building a permanent peace and reconciliation.

When we said in 2012 that a crisis was inevitable unless policy changed we were attacked by Sinn Féin and the DUP. Events have proven our analysis to have been correct.

Micheál Martin and Fianna Fáil spokespeople have been consistent in repeating our concern in speeches, interviews and meetings in all parts of this island. And every time we have spoken an inevitable press release has issued from Sinn Féin either denying that there was any problem or denying it had anything to do with them. When Martin first raised the issue of the systematic cover-up of sexual abuse in the Provisional movement he was aggressively attacked by the “new” faces in Sinn Féin who said he was playing politics.

Seventy Sinn Féin members and supporters witnessed the vicious attack on Robert McCartney in a Belfast pub and sat quietly while he bled to death and the Provisional IRA forensically removed evidence of its members’ actions. Sinn Féin admits what happened. Sinn Féin has called for people to come forward and assist the police. But no one has – because even for a non-political crime committed years after the Good Friday agreement, the movement comes first.

In terms of the “political threat” of Sinn Féin to Fianna Fáil, in May 2014 the polls showed Fianna Fáil in third place and behind Sinn Féin. In the local elections of that same month Fianna Fáil came first and was 10 per cent ahead of Sinn Féin.

Within only the last year Sinn Féin has delivered leaflets in north Belfast calling on Catholics to get one over on the Protestants, and Gerry Adams has referred to the equality agenda as a “Trojan horse” for “getting the bastards” in the unionist community.

People have a legitimate right to be concerned about clear evidence of Provisional IRA criminality and politicians have a duty to challenge those who want to turn a blind eye.

Fianna Fáil will continue its work to maximise the potential of the full implementation of the Good Friday agreement.