Should Liam Neeson be cancelled?

Were the actor’s remarks so disgustingly and violently racist that he brought this on himself? 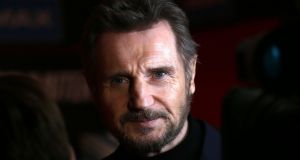 Actor Liam Neeson who has admitted that he harboured violent thoughts about killing a black person after someone close to him was raped. File photograph: Laura Hutton/PA Wire

The furore over Liam Neeson’s interview yesterday detailing his reaction to the rape of someone close to him some years ago has shone a light on the contemporary phenomenon of Cancel Culture.

The term refers to how people stop supporting someone – frequently a celebrity – financially, socially and morally, when that person has behaved or spoken in a reprehensible way. Simply put, it’s a neologism for boycott.

Regardless of whether the cancellation is deserved or not (which can only ever be a value judgment), boycotting somebody and calling for others to boycott them can have far-reaching effects on a person’s standing in society and their ability to earn a living.

Recent examples of “cancelled” celebrities include the comedienne Roseanne Barr (for racist abuse) and the actor and comic Kevin Hart who was supposed to be hosting this year’s Oscars ceremony but no longer is after the publication of a series of homophobic tweets he posted in the past. Some feel they were deserving of their punishments, others don’t.

But for a phenomenon that aims to deal satisfactorily with “problematic” behaviour and thought, Cancel Culture is viewed by some as problematic in itself.

In his interview with the Independent yesterday, Neeson said that his reaction to hearing that a loved one was raped was to first ask the woman if she knew who raped her. She didn’t. He then asked her what colour the rapist was. When she said it was a black person, Neeson took it upon himself to go out with the intention of attacking a black person – any black person – in his own form of warped retributive “justice”.

Neeson was chillingly explicit in his remarks, saying “I went up and down areas with a cosh . . . hoping some black bastard would come out of a pub and have a go at me about something . . . so that I could kill him”.

The very idea that any racial grouping are somehow collectively responsible for the misdeeds of one individual is as absurd as it is ignorant. As indeed is the fact that in this case a horrific act of sexual violence is only being talked about in terms of the reaction of a man.

For many, these remarks by Neeson automatically get him “cancelled”.

The term Cancel Culture originated on Black Twitter – a loose collective of primarily African-American Twitter users – a number of years ago but has gone mainstream of late given the amount of transgressions, historical and current, which are amplified by social media.

It is perhaps best explained by what happened to the film director James Gunn last year when he was fired from the Disney film Guardians of the Galaxy 3 after tweets that he had written between the years 2008 and 2012 that “joked” about child abuse and paedophilia resurfaced.

While some viewed Gunn’s tweets as despicable, others felt that his public apology for the damage the tweets had caused was enough for him to keep his job. As the argument went – you cannot judge a person solely by something dreadful they said in the past.

The stars of the film Gunn was fired from wrote an open letter in support of the director, arguing that he should not have been “cancelled”. They wrote that “there is little due process in the court of public opinion and that James is a good person” who was “cancelled” by “character assassination and a weaponised mob mentality”. The actors felt that everyone should be given the chance of redemption.

Redemption was also on Neeson’s mind during the Independent interview. After detailing his intent to murder a black person, the actor went on to say: “It was horrible, horrible, horrible, horrible when I think back that I did that . . . It’s awful. But I did learn a lesson from it when I eventually thought ‘What the f**k are you doing’”.

And there lies the dilemma of Cancel Culture. Were Neeson’s remarks so disgustingly and violently racist that he brought this “cancellation” on himself? Will there be pickets and protesters outside cinemas showing the new film, Cold Pursuit, he was promoting during his interview? Will the industry work with him again? Will future cinema audience members just see an actor who once said he wanted to go out and kill a random black person?

Or did he do enough in the interview to realise just how very wrong he was? Did he atone and redeem himself sufficiently?

The slightly bizarre aspect of all this is how – unlike other celebrities who have been “cancelled” when past utterances were uncovered by others – Neeson volunteered this disturbing information himself.