Shining a light on the legacy of lighthouses 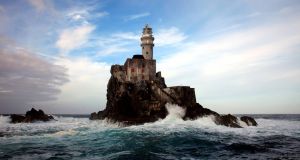 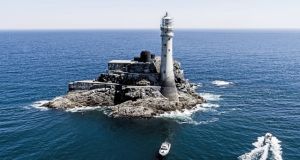 John Eagle went on a mission to capture every single lighthouse around the 7,800km-long coast. above, Fastnet lighthouse. Photograph: John Eagle

Boots Riley’s brilliantly wicked satire, Sorry to Bother You, may have us all thinking about our work world, but even a week in the life of a stressed-out telemarketing hero could surely not match that of a lightkeeper.

Like keepers, the hotbunking staff of Riley’s apocryphal tech company Worry Free could never go home, but lighthouse staff stationed on some of the more isolated postings – “stag lights”, as they were known in the US – required an endless supply of inner reserves.

Maintaining a light involved three keepers on 24-hour shifts, but in the early days of British “rock” stations only two keepers were rostered. A story is told that one of two keepers died during a period of particularly bad weather when the light was cut off for weeks.

The keeper’s colleague did not want to attempt a burial at sea for fear of being accused of murder. After a month, the poor survivor was discovered to have lost more than a colleague. Putrefaction had taken hold of the lighthouse quarters, and he had lost his mind.

It is one of the sadder accounts in a happy celebration of marine engineering by writer RG Grant. He has mined material in the British National Archives and in similar libraries all over the world to chronicle the background to 100 lighthouses built around the world between the 18th and 20th centuries. The miscellany with more than 400 illustrations, includes detailed architectural plans and elevations, period drawings and photographs.

Grant could have started with the Pharos of Alexandria, dating from 280 BC, which lit the Egyptian cost for almost 1,500 years before being felled by earthquakes. However, it was the Chinese pagoda built by Henry Winstanley on the Eddystone rocks off the Devon coast that caught his fancy. Winstanley was a businessman, engraver and inventor with a sense of adventure, who had transformed his Essex home into a fun palace, with “ghostly apparitions, trick chairs, distorting mirrors and a clockwork organ”.

Grant records how Winstanley had also invested in a fleet of five merchant ships, two of which were claimed by Eddystone. Working on a flat rock about half the size of a tennis court, he and his team of men endured a six-hour row from Plymouth and back over an entire summer of 1696. He lit 60 tallow candles in its lantern on November 14th, 1698, proclaiming it would “stand forever as one of the world’s most artistic pieces of work”.

Winstanley had also once wished he might be out there during “the greatest storm that ever was”. In late November 1703, he was effecting repairs when southern England was hit by violent winds. By the time it had passed, the lighthouse had disappeared, as had its maker.

Construction of west Cork’s Fastnet required incredible endurance and belief, as documented for the beautifully-filmed recent RTÉ television series, Great Lighthouses of Ireland, and Grant records how similar demands were made on many workers elsewhere. During the first two years of a seven-year build at Ar-Men rock off the Brittany coast, labourers could only spend about an hour on each visit before a rising tide.

Providing safe aids to navigation during the age of empire involved many injuries and cost lives. British army engineer John Kitson died of disease before he could finish illuminating the almost uninhabited Bahamas in the 1830s. His wife and three children had joined him in the Caribbean, and they were transiting an unlit part of the coast when they were shipwrecked and drowned.

West Cork based artist, photographer and writer John Eagle shared a similar passion to Grant, after he moved to from Oxford to the Beara peninsula. Eagle, who once spent time shooting world series racing cars at speed, liked the idea that lighthouses did not move.

A pint in Causkey’s pub in Eyeries with Barney Whelan, then working with the ESB fish-farming subsidiary, Salmara, changed his life. Whelan secured some sponsorship for Eagle’s first shots of lighthouses, and so began a mission to capture every single one of them around the 7,800km-long coast.

Several books, thousands of postcards and calendars later, Eagle’s images have sold all over the world. His last creation, a 2019 calendar, took just six hours to fly out the doors of Castletownbere’s SuperValu, with 100 per cent of proceeds going to his favourite charity, Cancer Connect. Shortly before Christmas (on December 18th), Eagle slipped away himself to the big lighthouse in the sky.

Sentinels of the Sea: A Miscellany of Lighthouses Past by RG Grant is published by Thames & Hudson. John Eagle’s work is on his website, johneaglephoto.com

1 Thirteen further deaths and 1,269 new cases of Covid-19 recorded in the Republic
2 Level 5: Fines for house parties and breaching 5km rule, while permitted funeral attendance up to 25
3 Government planned to extend sweeping pandemic powers with 45-minute debate
4 One hundred Irish retailers for all your online Christmas shopping
5 Support bubbles: Everything you need to know
Real news has value SUBSCRIBE