Scotland’s tribute to Deirdre of the Sorrows 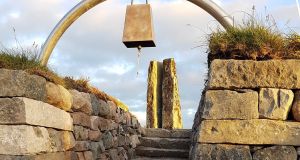 The ancient legend of Deirdre of the Sorrows, the great love story shared by Ireland and Scotland, and well known here, is all but forgotten across the water. Now thanks to a woman from Waterford, a monument set in stone and bronze on a high mountainside in Argyll will be a lasting memorial to the saga in Scotland, but of that more anon.

The tale of doomed lovers Deirdre and Naoise taken from the Ulster Cycle remains one of the most popular of all the Celtic sagas, with its visceral elements of lust, betrayal and death. Russell, Yeats and Synge saw in it themes of love, warrior honour, emigration and oppression, while modern interpretations view it as a feminist parable.

Convincing recent research, however, has established that Deirdre and Naoise may have been true historical figures as place-names in the north Lorne area of Argyll specifically relate both to them and to Naoise’s brothers Arden and Ainle, the sons of Uisneach. “Places do remember events”, as James Joyce noted when writing Ulysses.

Dun Mhic Uisneachain, for instance, is the Fort of the Sons of Usneach; Dun Mor/Dun Dheurtshuil is Deirdre’s Fort, a key point on the loch mentioned in Deirdre’s Farewell to Scotland (the ancient spelling of Deirdre which means eyes of sorrow); Cal-der-Lios/Cadderlie is where Deirdre and Naoise lived; A ’Cruach, is known locally as “Deirdre’s Sunny Bower”; Coille Nathais (Naoise’s Forest); Cruach Airdeanaidh – Ardan’s Rock and Clach Mo Naoisaig – Naoise’s Stone are some examples cited by local historian and Gaelic speaker John McFarlane, who has compiled a list of some 500 place-names in the area.

A very dramatic landmark high in the mountains with spellbinding views overlooking Loch Etive was officially unveiled at the weekend commemorating the lovers and their association with the area. The ceremony was attended by Michael Russell MSP and Mark Hanniffy, consul general of Ireland to Scotland, who read the following message of support from President Michael D Higgins: “There is no place on our islands more representative of that shared inheritance than Argyll, once the home of the ancient Gaelic Kingdom of Dal Riada. It was there that Cu Chulainn the warrior hero of the Ulaid was said to have learned the arts of war and it was there that Deirdre sought sanctuary with Naoise and his brothers Arden and Ainle. I am so pleased that a magnificent memorial will now rest forever on Beinn Glas, not far from Gleann Etive ... and may it stand as a monument not only to the common past of the peoples of Scotland and Ireland, but to the shared destiny of our two ancient countries”.

At the launch event in Taynuilt heralded by the Oban High School pipers, the Oban Gaelic Choir and piper Angus McColl, Russell in his eloquent address referred to the 780-year-old Glen Massan manuscript held in the National Library of Scotland in which Deirdre’s story is told in its earliest form.

“The poems in the document are all rooted in actual places, particularly true in Deirdre’s farewell to Scotland, the poem which is most valued in Scotland itself as it speaks so movingly of the love of an Irishwoman for the country in which she lived so happily. She is Ireland’s Helen of Troy”, he said.

Called a sheiling, an ancient Gaelic word for a mountain shelter, the monument commissioned by Sam Macdonald on land once owned by him marks another poignant love story. His wife Evelyn Day from Dunmore East, an artist to whom he was married for 50 years, died of cancer in January 2017.

She had once asked if he would consider setting something into the landscape to commemorate Deirdre and Naoise. Knowing the story so well, she was constantly astonished as how little anyone in the area knew about it and its local relevance.

The design was drawn up and executed by the Scottish sculptor David Wilson, who was enthralled by the beauty of the site. The main elements are two imposing original standing stones representing Deirdre and Naoise and a golden sculpture based on Brancusi’s Kiss owned by Macdonald, along with a Celtic bell designed by Iona artist Mhairi Killen and cast by David Snoo Wilson of the Travelling Foundry. Installations at the entrance to the sheiling contain the poem “Deirdre Remembers a Scottish Glen” and the story of Deirdre of the Sorrows, but also a map citing eight local sites that have specific references to the couple.

For Sam Macdonald, the memorial is the fulfilment of a promise to his beloved Evelyn. “I wanted to bring this story alive again and reinforce the strong social and cultural ties that link the people of the West Highlands with their Irish friends and neighbours across the water. I think it will be a very romantic spot and draw visitors from all over the world”. www. thedeirdresheiling-co-uk

5 Q&A: Covid vaccine side effects – What are they, who gets them and why?