Rush to moralise over Tuam has run ahead of the facts

While the home was an awful, tragic place, it was not necessarily a site of insanity or evil 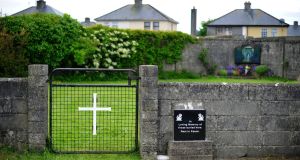 The site where the remains of children were found at the Tuam mother and baby home. Photograph: Aidan Crawley/EPA

There is something deeply disturbing, ghoulish even, in the media and political discussion of the Tuam mother and baby home.

No one, apart from a handful of Catholic extremists, denies that conditions in the home were grim, and that the women and children who lived and died there were gravely wronged.

But the mawkish discussion of Tuam, the transformation of it into fodder for tabloid outrage and ostentatious emoting on Twitter, is an ugly spectacle.

It seems designed not to work out what happened in the home, but to make it a symbol of evil that we decent people might contrast ourselves against.

It’s virtue signalling – an attempt to advertise one’s own moral rectitude by poring over the depravity of bygone eras.

The most striking thing about the handwringing over Tuam is its impatience with fact-gathering. These Tuam ghouls cannot wait for all the information – they have virtue to display, and they’re damn well going to display it.

Consider how much they’ve extrapolated from the short statement made by the Commission of Investigation into Mother and Baby Homes.

On Friday, the commission confirmed what many had suspected: that babies and young children were buried in the grounds of the home.

It said “significant quantities of human remains have been discovered” in a “long structure divided into 20 chambers”. It said the structure “appears to be related to the treatment/containment of sewage and/or waste water”, but it has “not yet determined if it was ever used for this purpose”.

In short: we don’t yet know how many of the 796 children who died at the home between 1925 and 1961 were found in the structure; or what the structure was; or how the children were buried – whether it was respectful or done in a more cavalier way.

And yet this hasn’t stopped tabloids from crying “Mass grave… discovered in sewage tank”, as the Irish Sun did. It didn’t stop the writer, Donal O’Keeffe, from tweeting: “It was all true. Every word. 796 babies dumped in a septic tank in Tuam.”

It was no barrier to Emer O’Toole outraging readers of the Guardian with the image of children “lying in that septic tank”.

Right now, as things stand, these heated claims of 796 babies having been dumped in a sewage tank are works of the imagination rather than proven facts.

They are intended to conjure up images of evil nuns hurling tiny corpses in with the shit. But there’s nothing to show that this happened. The number of bodies discovered remains unknown, as do the circumstances of their burial. Can we not wait?

The rush to moralise about Tuam doesn’t only run ahead of facts – it seems also to run ahead of common decency.

Witness how the commission told the media about the discovery of human remains before it told the Coalition of Mother and Baby Home Survivors (CMABS), some of whose members lost siblings in Tuam. A spokesman for CMABS said it was “shocking we [had] to learn of this news via the media”.

One can’t help feeling that the commission’s urge to emote publicly, to display its “shock”, overrode the traditional decorum of informing individuals of the potential discovery of family members’ remains. Nothing, not even basic civility, can be allowed to stand in the way of virtue-signalling over Tuam.

The discussion of Tuam has been unhinged for some time. In 2014, when researcher Catherine Corless first speculated, correctly, that children were buried at the home, a writer for the Derry Journal said: “This is our nation’s holocaust.” Pat Flanagan at the Irish Mirror referred to it as “our own little holocaust”.

The use of the H-word is especially disturbing. The Holocaust was the conscious, murderous destruction of a people. Using it in relation to Tuam implies the nuns killed children, casually, on a mass scale. There’s no proof for any such thing.

Such is the morally charged climate around the Tuam home that anyone who keeps an open mind as to what happened there risks being denounced as an apologist for horror. But we must keep an open mind.

If we look calmly at what is actually known, then it seems that while the home was an awful, tragic place, it was not necessarily a site of insanity or evil.

That the “structure” had 20 chambers suggests it had been turned into a kind of catacomb. That the children buried there were “swaddled up”, as one eye-witness described it, suggests they were not simply “dumped”. That the discovery of the structure in the 1970s was followed by a priestly blessing and then the setting up of a grotto by local people suggests the town of Tuam, and Old Ireland more broadly, was not a foul place but rather had many good people in it, concerned for the dead.

The evidence we have so far suggests life in the home was exceptionally difficult and, of course, utterly unjust: these women had committed no crime. We also know the infant mortality rate was terribly high, no doubt as a result of poverty or institutional neglect, or both.

But a holocaust? Babies flung in sewage? There’s no proof. Doesn’t proof matter?

As an atheist, I have no interest in defending the Catholic church. I want to defend science, rationalism, and approach history in a measured way.

You see, this is the terrible irony of the Tuam ghouls. In running ahead of the facts and turning this into a black-and-white morality play, in which they star as paragons of decency against hellish nuns, they reveal that they share something in common with the Old Ireland they claim to hate: a preference for moral zealotry over reason.