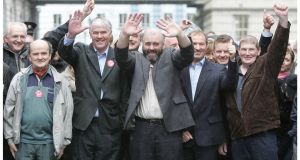 As gas is flared into the skies above north Mayo, it is worth reflecting on a project that has been one of modern Ireland’s greatest scandals, a stunning fiasco in planning, economics, environmental protection and the abuse of civil liberties.

Far from it being just about energy supply, jobs and development, the Corrib gas project cuts to the core of this republic and asks big questions about how the country is run.

For more than 10 years now, campaigners have attempted to highlight the project’s many flaws.

It has been a battle of David versus Goliath, a rural Gaeltacht community versus Shell, the fourth-largest company in the world, its partners Statoil and Vermillion, and their powerful allies in politics and the media.

In the course of an often tense campaign, many of those involved have been ridiculed, slandered, spied on, harassed, beaten and jailed – all for upholding their democratic right to peaceful dissent. Incidents included the 2005 jailing of the Rossport Five, who spent 94 days in prison at the behest of Shell.

There is also the still-unexplained sinking of fisherman Pat O’Donnell’s boat in 2009.

In the same year, local man Willie Corduff was beaten by men in balaclavas to the point where he had to be taken away on a stretcher by ambulance. A report for Frontline Defenders by barrister Brian Barrington recommending that the Garda reinvestigate this case has not been acted upon.

The list of incidents is extensive and includes a case of gardaí who were recorded joking about raping and deporting two women protesters after arresting them. Other issues concerned the controversial role of Shell’s private security firm IRMS, which employed former gardaí and army personnel.

The history of this all-too-politicised project merits a close look. Consider the view of Kevin Moore, a senior planning inspector with An Bord Pleanála who was clear in his 2003 rejection of planning permission for the refinery.

Months later, a revised planning application for the same site was submitted and the following year this was approved by An Bord Pleanála.

The deal ensured the consortium could write off exploration expenses against tax and benefit from one of the world’s lowest rates of tax for oil and gas exploration.

In addition, the deal meant that security of supply for Ireland was not assured. The State will have to buy Corrib gas on the open market on the same terms as any other country.

It is this murky history that gave rise to comments by local priest Fr Michael Nallen when he said “politically this project has been through unsafe hands”.

There are of course voices who say that the protesters failed in their aim of having the gas processed at sea, as is standard international practice, or in locating the project to the more suitable location of Glinsk, which is away from people’s homes and what is designated as a European Union “special area of conservation”.

The various criticisms are often based on a cursory analysis. They ignore the fact that the campaigners did what we encourage all people to do, that is to stand up for their rights and uphold their dignity as human beings and as citizens. They did so while refusing financial pressure and being abandoned by most of the main political parties.

It is a situation that would be unthinkable in Norway, home to Corrib gas partner Statoil, which is owned by the Norwegian government.

Despite their vilification, the Corrib gas campaigners have done Ireland a great service.

They have helped us to understand the sometimes shadowy workings of Irish democracy, while highlighting the need for leadership in replacing our reliance on fossil fuels with renewable energy solutions that respect people, planet and the exchequer.

Ruairí McKiernan is a social campaigner, Fulbright scholar and a member of the Council of State. ruairimckiernan.com