Remainers should not be let off the hook on Brexit

World View: Remain side is still failing to sell its case despite possibility of a second referendum

Former UK prime minister Tony Blair said at a speech for the 'People's Vote' campaign, that there was an increased likelihood that a second referendum on UK membership of the EU would take place. 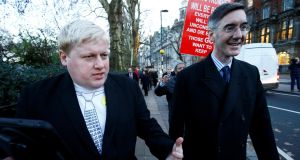 Brexit is the ultimate tragi-comedy – a high-stakes drama that we all know will end badly, with a protagonist (the UK) undone by his own flaws and an audience that alternates between gasps of horror and howls of laughter. Who can watch otherworldly villains such as Jacob Rees-Mogg or Boris Johnson and not feel both responses simultaneously? But what if the wild shortcomings of those cartoon characters are at the same time a sort of comfort blanket, freeing us of the need to think more deeply about the causes of England’s nervous breakdown?

Consider Irish perceptions of the fiasco. It evokes genuine fear, not least in those who live near the Border or rely on trade for their livelihoods or count themselves among the silenced majority in Northern Ireland who voted Remain. There is also sadness; sadness at the loss of a close ally at the EU table, sadness for all those British friends and relatives betrayed by their ruling class, sadness for the young people whose life opportunities are being curtailed by older generations.

Inescapable, however, is a sense of schadenfreude at England’s self-destruction, and self-satisfaction at the flattering contrast between Britain’s turmoil and the stability in the Republic, where the main parties have virtually identical positions on Brexit and where surveys show the public to be resolutely pro-European. If Johnson and Rees-Mogg are the villains, any Remainers who can string two coherent sentences together and identify Belfast on a map are acclaimed as visionaries.

It’s a comforting illusion to think this is all the fault of the Brexiteers. Of course, they are to blame for the lies that helped get Leave over the line in 2016, and for creating a climate of hostility towards the EU for decades before that. Were it not for them, the no-deal scenario would have been off the table long before now. But that shouldn’t get Remainers off the hook. They failed to make a good enough argument for EU membership. More worryingly, they’re still not even attempting to press the case.

In 2016, Remainers made a terrible miscalculation. Theirs was a cold-blooded, cost-benefit argument: the EU may not be perfect, but the potential gains from leaving are outweighed by the risks. Knowing that voters are generally risk-averse, the campaign bombarded them with dire warnings and worst-case economic scenarios. Almost entirely absent was any positive case for the EU. Perhaps they were incapable of making one; after spending four decades blaming the EU for domestic failings and peddling the myth of British exceptionalism, it might have looked insincere.

Remainers were correct in concluding that voters felt Brexit was risky. But in their book Brexit: Why Britain Voted to Leave the European Union, academics Harold Clarke, Matthew Goodwin and Paul Whiteley found that perceptions of the risk varied across society.

Even now, the Remain argument is negative: staying in is better than chaos

According to the authors’ statistical analysis, people who felt negatively about immigration or felt economically left behind were much more likely to minimise the risk. Leavers had a powerful, emotionally resonant issue: immigration. Remainers could have had one.

“After worries about the risks of Brexit, the second strongest predictor of the Remain vote were positive feelings about the EU – a driver that was not maximised by Remainers,” the authors write.

Ultimately, that opened a decisive “enthusiasm gap” that made it easier for Brexiteers to bring out their voters. The out camp rightly understood they had to sell a positive vision. It was a fraudulent one, filled with lies and inconsistencies and wishful thinking, but to its audience it was uplifting and hopeful. The Remain campaign, in contrast, was essentially pessimistic.

Not much has changed. This week, a second Brexit referendum appears to be closer than at any point since 2016. Remainers will never have a better chance to turn this around. But what’s the argument you hear them make? Is it about the social protections or climate change-mitigation measures the EU has enshrined in law? The vision of a continent at peace, where young people can study and learn languages and the elderly can retire in the sun? Do you hear about how the single market turbo-charges the British economy? Do you hear how the EU amplifies Britain’s voice in the world? No. Even now, the Remain argument is negative: staying in is better than chaos.

That’s largely why, if a second referendum were held next year, a reversal of the outcome would be a long shot. Even if Remain prevailed, England’s neuroses on the issue wouldn’t go away. It would fester for years to come, gnawing away at national politics as it has done for decades. A third referendum would surely follow within a decade. Plotting a different course would require pro-Europeans to acknowledge an uncomfortable truth: Brexiteers may be fantasists, but they’re also the visionaries. For Remainers to take back control, to borrow a phrase, that mantle must be reclaimed.