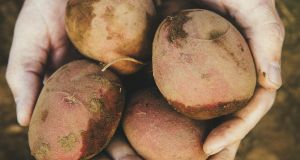 I hope it won’t come to this during the Great National Lockdown of 2020, but if food supplies do run a bit low over the weeks ahead, we can always fall back on the hard-won wisdom of our ancestors in making the most of scarce resources. For starters, we could revive a former staple of Irish life – “the half-boiled potato”.

The importance of this recipe here once was noted by the 19th-century travel writer Dr James Johnson in his book: Tour in Ireland, With Meditations and Reflections. While the English might consider an undercooked spud indigestible, he wrote, it was “this very quality […] that recommends the par-boiled potato to the poor Irishman”.

The labouring classes here rarely had more than two such meals in 24 hours, Johnson explained, “and if they were well-boiled, the pangs of hunger would be insufferable”. But custom had reconciled the Irish stomach to this “wretched food” and we had somehow developed a taste for it: “even the children complain if they find no ‘bone in the potato’.”

Johnson’s account was published, ominously, in 1844. Soon afterwards, even this dubious dish would be an unattainable luxury.

In the calamity that followed, however, that phrase “bone of the potato” crossed the Atlantic with emigrants and resurfaced there in the second half of the century, to the bafflement of Americans.

Here’s an 1859 food book, published in New York, pondering one of the first-world problems of the day. “We have all wondered why our Irish servants persist in bringing half-boiled potatoes to the table notwithstanding our repeated orders to the contrary,” noted the writer. Then he quoted Dr Johnson’s explanation that it was “almost a universal custom” among the poor of Ireland, when boiling the vegetable, to leave the centre so hard “that it is called the bone”.

I would like to claim that this knowledge of how to maximise the benefits of potatoes had been handed down to me by oral tradition. In fact, I only learned of it this week via Twitter, and by a circuitous route.

It started with a discussion about Swedish and other words for the trail of light the moon makes when viewed across water.

Mangata, the Swedes call it, meaning “smoon street” – a beautiful concept. The Finns use “Kuunsilta” (“moon bridge”), which is lovely too. And so on.

But surely, I thought, the Irish language must also have a poetic word for the phenomenon. And if anyone would know, it was Fr Patrick Dinneen, the famous lexicographer, whose Foclóir Gaedhilge agus Béarla (1904) featured many obscure words and meanings that, if they had ever been revealed to anyone else but him, had since been forgotten.

Alas, to my disappointment, his dictionary does not seem to have covered the idea of imaginary aqua-lunar transport infrastructure. But as usual, there were compensations. And sure enough, among its definitions of the word “gealach” were these: “f., light, brightness, moonlight, the moon, the white circle in a slice of a half-boiled potato”.

It must be said that Dinneen’s ability to find unsuspected layers of meaning in even the most common of Irish words has not always been appreciated. Myles na gCopaleen, formerly of this newspaper and himself a noted Gaelgeoir, stopped just short on several occasions of suggesting that the eminent lexicographer was having us on.

His mixed compliments included calling him a “great patriot and humourist”. He once also likened the use of the dictionary for reference to “choosing a minefield as a dancefloor for a 16-hand-reel”. Indeed, he credited Dinneen as an influence on his own decision, circa 1942, to stop writing columns in Irish.

Given the bottomless depths of meaning words seemed to have in Dinneen’s researches, he claimed, it was too dangerous: “If I write in Irish what I conceive to be ‘Last Tuesday was very wet’, I like to feel reasonably sure that what I’ve written does not in fact mean ‘Mr So-and-so is a thief and a drunkard’.”

More than once, Myles cited the alleged similarity of the moon to a slice of half-boiled potato as evidence of Dinneen’s habit of drinking too deeply from the well of oral tradition.

Now we know that, in this at least, the lexicographer was on solid ground.

Not only is the half-cooked spud a proven source of sustenance in hard times, but with little else to entertain us through the long nights of the rest of this month, its lunar enlightenment might also provide food for the soul.