French Connections – Frank McNally on philosophy, the Mountains of Mourne, and women’s art 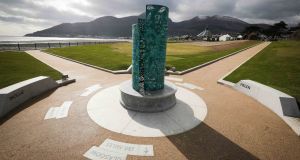 The coronavirus epidemic is proving again the wisdom of Blaise Pascal’s famous lament: “All the troubles in the world stem from man’s inability to sit quietly in a room alone.” His words have provoked centuries of debate about why people find doing nothing so difficult. But of course, he was himself a perfect illustration.

Trained as a mathematician, Pascal (1623-1662) invented among other things the world’s first mechanical calculator. He was barely out of his teens at the time. The philosophical writings came later, after a religious vision, and for a while then he was well capable of sitting in a room, thinking.

He even welcomed his poor health, arguing that sickness was “the natural state of Christians”. This hastened his death, at only 39. And yet despite such asceticism, he returned to being an inventor at the end, in the process making an unwitting contribution to the progress of viruses.

It was thanks to him that, in March 1662, Paris acquired something called carrosses à cinq sols, “Five-penny coaches”. Multi-seat, horse-drawn carriages serving fixed routes at regular intervals, they were the world’s first public transport system.

Still on the subject of French philosophy, I made a trip to Newcastle, Co Down, over the weekend for the unveiling of a memorial to Percy French, the songwriter, in a place immortalised by his most popular ballad: “Where the mountains of Mourne sweep down to the sea.” Now there was a man who had the inner resources to be able to remain in his room for extended periods, if not quietly, and entertain anyone else who was there. He too had scientific training, as an engineer, spending early years as an “inspector of drains”.

But he gradually lapsed into a life of painting, poetry, music, and storytelling. And unlike Pascal, he didn’t relapse. His most famous contribution to public transport was lampooning the West Clare railway in another of his greatest hits, Are You Right There, Michael?

There was snow on the top of Slieve Donard, overlooking the hotel of the same name, where the £230,000 memorial was unveiled on Friday afternoon. But to quote yet another French favourite Come Back Paddy Reilly to Ballyjamesduff, “a blue sky [was] over it all” as poet Paul Muldoon did the honours. The memorial includes stone benches inscribed with the names of the women the songwriter most loved – his (second) wife and daughters – around a walkway with pointers to the places he eulogised. And the sun shone through his lyrics, literally, via the centrepiece, a metal construction perforated with the deathless words: “Oh Mary, this London’s a wonderful sight”.

Within 24 hours of either side of the trip to Newcastle, being unable to stay in my room, I also attended the GPO’s launch of five new stamps, all honouring women, and then the opening of an art exhibition, with a similar gender theme, in my home town Carrickmacross.

One of the stamps features Sarah Purser, an artist who broke the glass (and indeed stained-glass) ceiling by becoming the first female member of the Royal Hibernian Academy in 1924.

But even allowing for a century of progress since, I was astonished at the line-up that curator Orlagh Meegan-Gallagher had managed to assemble (with the help of a shy male donor) for the Carrick show. A who’s who of Irish women artists including Dorothy Cross, Alice Maher, Pauline Bewick, and Anne Madden, it was worthy of Imma, never mind a town of 5,000. Entitled The Blue Veil, it is now open daily at the Civic Offices.

On the way back to Dublin afterwards, reflecting on the 100 years since Percy French’s death and the many advances made by Irish women, I remembered yet another of his songs: one you don’t hear so much these days.

“McBreen’s Heifer” concerns the dilemma of a male suitor torn between two sisters, one “pretty”, the other “plain”. The suitor’s problem is that in calculating their dowries, the cunning father (McBreen) has offered bridging finance – a heifer – with the plain daughter, equalising their attractions. No, it hasn’t aged well, even if the dithering suitor is rightly punished when – plot spoiler alert – both sisters are snapped up by grateful rivals.

But if there is any justification for the ballad today, it might be that it illustrates another famous paradox, named after a different animal and a different French philosopher. Pursuing the logic of free will to the ultimate, this imagines a hungry donkey placed between two identical bales of hay. Unable to choose either, he dies of starvation. The paradox is known as Buridan’s Ass.

1 Mother and five children sleep in car while seeking shelter
2 Mary Trump: The inside story of why she wrote a tell-all memoir
3 On your bike: Good-value areas to buy a home a short cycle from central Dublin
4 Twenty-six pubs could be prosecuted for breaches of Covid-19 regulations
5 Naomi O’Leary: Ireland’s travel policy curbed by Britain
Real news has value SUBSCRIBE