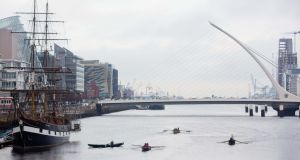 Boat crews practise for the All in a Row 500km charity row on December 9th. Legislation must be changed to prevent bodies being deemed as seeking to influence government policy. Photograph: Tom Honan

As anyone paying attention to current affairs will be aware, there are very good reasons why we should all be concerned about the issue of outside parties seeking to influence the democratic election processes that we hold dear. However, it is increasingly clear to us in The Wheel that there is now a real risk that existing laws, designed to prevent such abuse in Ireland, may now be used to potentially muzzle legitimate and important voices in civil society, ie community organisations, non-profits, charities and international NGOs among others.

At the heart of this issue is a 2001 amendment to the Electoral Act of 1997, which aimed to prevent wealthy individuals and groups – particularly those from overseas – from interfering in Irish elections and referendums. The problem with the amendment to the Act, however, is the vague language that it employed to define a “third party” (the mechanism used to classify the types of groups which fall under the Act’s provisions). Since 2001, the language now includes any organisation simply seeking to influence government or public policy. Even a local group campaigning for better street lighting or for a neighbourhood playground could now be interpreted to fall within this. All they would have to do to become a “third party” is accept a donation over €100, with the result that those running the campaign would be effectively criminalised if found to have technically breached the Act. This has the potential to severely restrict the everyday work of a huge range of organisations that work at the local and national level to secure change in the interests of their communities and of wider society.

Although this situation has existed since the amendment in 2001 introduced the potential problem of definition, it is fair to say that, until recently, the relevant regulator – the Standards in Public Office Commission (Sipoc) – applied a “common sense” interpretation of the Act to Irish community groups, meaning their work was rightly interpreted as not being overtly political. In recent months, however, this common sense approach appears to have been abandoned and the vagueness of the definition of “third parties” in the legislation is at the root of the problem. Sipoc, in fairness to it, identified this problem as far back as 2003.

On its website it states it has concerns about the effectiveness and scope of the provisions of the legislation relating to third parties and because the definition of political purpose is so wide it may it may unintentionally cover everything from a Tidy Towns Committee to Ibec. The commission doubts if it was the intention of the legislature that such bodies, in conducting their ordinary affairs, could find themselves covered by the legislation.

Conferring “third party” status upon an organisation would mean they must henceforth comply with a slew of funding restrictions designed for political campaigns and intended for those influencing elections and referendum results. It may, of course, be reasonable and appropriate for community groups, charities and NGOs to be subject to regulation under the Electoral Act if they are calling on people to exercise their vote in a particular way in an election or referendum. However, common sense dictates that the legitimate day-to-day advocacy and public policy work in Ireland by these types of community-based organisations should continue to not be affected by this legislation.

The recent change in how the Act is being overseen, made possible by the vagueness of the legislation, now presents a real and material threat to the work, independence and even the existence of many civil society organisations. A number of The Wheel’s members have been actually instructed by Sipoc they now qualify as “third parties” and thus some Irish non-profits are now being threatened with prosecution for doing the day-to-day work that they exist to do.

To be clear, these groups are not campaigning for any party-political purpose, but rather are carrying out their time-honoured duty of advocating for the people they serve and the causes they espouse through activities such as contributing to government consultations, supporting the development of a specific national policy or campaigning for the right to housing, or a living wage.

Fortunately, the Government can avert this crisis by speedily introducing the necessary clarifying amendments to the third-party definition so that it should apply only to influencing elections and referendums, and not more general government or public policy work.

Deirdre Garvey is chief executive of The Wheel, the national association of community, voluntary and charitable organisations