Kathy Sheridan: Finns show Ireland what small country can be

State aged 100 near top of world rankings for education, innovation and quality of life 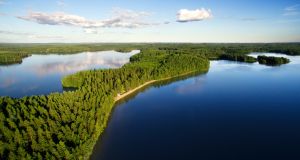 How was it for you? Did we not man that “bearna baoil” and get the upper hand on “the Saxon foe”? For the first time in 800 years. Without a squeak of a cannon’s roar or rifles’ peal. So how do we feel? Will this do:“Stunning victory for Irish diplomacy: drew the concession from May, split her coalition, kept European Union onside. That should shut a few British gobs”?

No, not the words of some triumphalist Paddy but of Simon Nixon, chief European commentator for the Wall Street Journal, London Times columnist and self-described “Britisher”. So from our divinely-ordained perch we send a barely perceptible nod and a Mona Lisa smile in Nixon’s direction and merely note that yesterday’s Daily Mail led its English edition with a piece about paedophiles, a picture of a big jam jar and Lily Allen. The Mail will retrieve its flag-bothering mojo, of course, but this week it is scorched. Scorched. And here we are, snuggling up to all that lovely Irish diplomacy.

So how should we mark these momentous events?

With a population not much bigger than Ireland’s, it somehow survived all those wars, reparations and deep depressions

Perspective. Today marks the centenary of another plucky little euro-zone republic. Finland, home of the sauna, the heart-rate monitor, Nokia phones, Angry Birds, the bubble chair and – compliments of the season to you – Lapland. A Swedish possession for 600 years, then a Russian grand duchy until 1917, it endured a bloody civil war, fought off Soviet occupation in the second World War (after which it was obliged to pay $226,500,000 war reparations in gold, via 346,000 railroad car loads, to the Soviet Union, and cede 10 per cent of its territory), and managed not to poke the Russian bear throughout the Cold War.

Given its 1,340km border with Russia, its resistance to joining Nato resurfaces regularly, but despite the giant, restless bear just across the border, four in five Finns are happy with the status quo. And Russia remains a major trading partner. During a July visit to Finland, Vladimir Putin praised the calibre of “political dialogue” between the two neighbours.

Now, close your eyes for a moment and imagine the sustained, meticulous, stunning diplomacy entailed in that achievement?

Then ponder this. With a population not much bigger than Ireland’s, it somehow survived all those wars, reparations and deep depressions, “to turn one of the poorest corners of Europe into one of the richest, most equal, most contented countries in the world”, to quote the WSJ. How did that happen? A happy accident, apparently. There were all those war reparations and some switched-on Finns had the idea that, to meet the challenge, they had to mobilise all the country’s resources.

So now Finland consistently ranks near the top of world rankings for education, innovation, political stability and quality of life. It’s the safest country on Earth, according to the Travel Risk Map, is the ninth most tolerant, says the Legatum Prosperity Index, the third most gender equal, and features in the top 10 for wifi speed. Last week, Slush, its annual start-up gathering – described as a serious business conference with a festival vibe and the only one of its kind to be run by student volunteers – attracted 20,000 attendees.

Also – this may hurt – it is the only country in the developed world where fathers spend more time with school-aged (preschool children have a way to go) children than mothers. Eight minutes a day more, according to a recent OECD report.

Fathers are endlessly encouraged. They are offered nine weeks of paternity leave and 70 per cent of their salary. And to encourage them to take up the damn benefit, the government has launched a new campaign – with flyers showing a burly builder gleefully pushing a pram – called “It’s Daddy Time!” When parents go back to work, universal day-care costs a maximum of €290 a month.

Finland has its problems, of course. The gender gap still hovers at 16-18 per cent and women make up less than a quarter of board members in listed companies

“This is not about the mother’s right or the father’s right – but the child’s right to spend time with both parents,” Annika Saarikko, Finland’s minister of family affairs and social services, told the Guardian. Saarikko, by the way, is one of six female ministers out of a cabinet of 11. And 42 per cent of Finnish parliamentarians are women.

Finland has its problems, of course. The gender gap still hovers at 16-18 per cent and women make up less than a quarter of board members in listed companies, so for the centenary celebrations, the government’s bold statement comes in the form of an International Gender Equality Prize, worth $180,000 to a person or organisation that has advanced gender equality “in a globally significant way”, to donate to the cause of its choice.

Happy 100th, Finland. Today I want to snuggle up to you and listen to Jean Sibelius’s Finlandia. In a week when our national anthem is up for discussion (again) and we mark a new dawn in the national ego, I would like to make a pitch. Let’s just steal Finlandia and make it our own.

1 We need to pay very close attention to what is happening in Britain now
2 Quarantine will cease within fortnight, Ryanair CEO claims
3 Coronavirus: Nine more deaths reported in the Republic
4 Connell losing touch with the club championship is the real tragedy of Normal People
5 50 things to do in Ireland this summer
Real news has value SUBSCRIBE