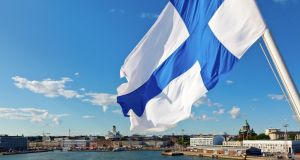 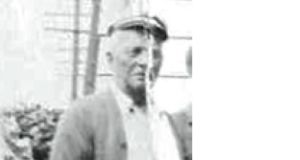 During the Easter Rising, a 31-year-old Finnish sailor, Antti Mäkipaltio, showed up at the GPO in Dublin with little English but determined to fight for Irish freedom.

Every weekday morning in Berlin, from October to April, I flick a switch and give thanks for Finland.

The lamp – a metre-high oblong contraption of robust plastic with a round hole in the top – is the brainchild of designer Eero Aarnio, whom I interviewed some years back. He is perhaps best known for his ball chair, a design as original as his homeland.

Tucked into the northernmost reaches of Europe, Finland spent most of its history under foreign rule until it declared independence from Russia 100 years ago today.

Like the Irish, the Finns shook off foreign rule only to sink into civil war – decades after the catastrophe of famine. Crops failed over three years from 1866, leaving an estimated 270,000 – nearly 9 per cent of the population – to starve.

Today’s connections to Finland are alive and well, from joint Lebanon peacekeeping missions to Aku Louhimies, the director behind RTÉ’s Rebellion.

For Finnish-born dietitian Eva Orsmond, best known from “Operation Transformation”, independence day is a family affair. Her grandfather fought in the 1939-40 winter war against the Russians, she says, securing Finland’s independence while neighbouring countries were pulled behind the Iron Curtain.

Many Irish have made Finland home: the city of Oulu has the world’s most northerly Irish festival while its co-founder, Galwayman Oliver Hussey, is also a driving force between the St Patrick’s Day greening of a sauna and public pool in his adoptive home of Tampere. The pool is a hole cut into the frozen surface of Lake Näsijärvi, which doubles as pitch for a hurling match with a green sliotar.

While its Nordic neighbours faff about with fika and hygge, the Finns are top of the class with the important things in life: education, standard of living and coffee consumption.

Finland conquered the world with Nokia mobile phones, now making a comeback, and has given us cartoon characters as diverse as children’s favourite “The Moomins” and queer idol “Tom of Finland”.

Anyone who thought Ireland was world champion in social awkwardness will find much to laugh at in the fist-biting torment of another cartoon character, Matti, in “Finnish Nightmares” (finnishnightmares.blogspot.de).

While the Irish deal with social awkwardness with the redundant “sorry” and verbal diarrhoea, German dramatist Bertolt Brecht once joked that the Finns have two official languages – Finnish and Swedish – and are silent in both.

Experiencing this stoicism first-hand is quite a culture shock, topped only by mastering your inner Irish prude to embrace the naked sauna tradition, ideally followed by a nude plunge into the Baltic Sea.

Speaking of stripping off, it was in Helsinki that I had possibly my most bizarre interview ever, with Alexander Stubb.

An energetic politician and self-promoter, Stubb – then European affairs minister – had clearly forgotten I was coming to talk to him on a Friday afternoon.

Determined not to let an Irish journalist foil his early weekend escape, the minister let me talk while he stripped out of his suit in front of me – right down to his underwear – and changed into his weekend clothes.

When his children burst in, Stubb confessed he had a plane to catch.

Our interview took place in his ministerial car on the way to the airport and the politician remained fully clothed throughout.

An even more interesting political link to Ireland is Finnish foreign minister Timo Soini. He has been a fan of Ireland – and devout Roman Catholic – since an “amazing” encounter with a nun in St Mary’s Cathedral, Killarney, in 1985.

There are many ways to celebrate Finnish independence: salty liquorice, tangy Emmental cheese on rye bread – all washed down with a bottle of vodka.

Or consider a trip to beautiful Helsinki, filled with striking architecture from the hulking central station from 1919 to, my favourite, the art deco Fazer cafe.

The current six freezing months of short days and freezing nights are perfect for visiting Santa Claus in Lapland, but Finland really comes into its own in the summer, with days as endless as the coastline.

A true-life story, ripe for one of the Finnish director’s scripts, took place during the Easter Rising when 31-year-old Finnish sailor Antti Mäkipaltio showed up at the GPO in Dublin with little English but determined to fight for Irish freedom.

When taken inside, the Finnish sailor proved a liability with a shotgun and was put to work sorting ammunition in the back. Mäkipaltio was captured in the surrender and, on his release, emigrated to the US.

Departing Dublin he was still unable to speak English but was able to recite the rosary in Irish.