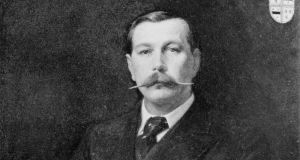 Arthur Conan Doyle: was known to recite in company an epic ballad of dubious quality inspired by the Battle of Cremona (1702)

Unlike the one at Fontenoy 43 years later, to my knowledge the Battle of Cremona (1702) has never qualified for that ultimate Irish compliment of having a GAA club named after it.

Yet it should have done, arguably, because it meets most of the same criteria. It too was fought on mainland Europe, in a multinational conflict, with the heroic involvement of emigrants from this country who in the process conferred glory upon Ireland.

It was famous enough in its time, and long afterwards, to inspire poetry and song. It also provoked an epic ballad of dubious quality by Arthur Conan Doyle, who was known to recite it in company.

But today the battle is mostly forgotten in Ireland, except in the coded landscape of Dublin, where it is commemorated by the name of a road in Ballyfermot and a townland in Swords.

This weekend marks the 218th anniversary of the events, which began on the night of January 31st, 1702, and was part of a much greater struggle in Europe then: the War of the Spanish Succession.

That had started with the demise in 1700 of the in-bred and always sickly Charles II of Spain, who died aged 38, without an heir, precipitating 13 years of what some historians consider the real “first world war”.

The main combatants at Cremona were the occupying French and the Austrians, who were trying to recapture the city.

On the side of the former were the newly arrived Wild Geese regiments of Dillon and Bourke, with the bitterness of Limerick still fresh in their minds.

But as in all the best battles of the era, there were Irishmen on both sides.

One Francis MacDonnell from Mayo served as a captain in the Hapsburg army, a fact that added intrigue at the height of the battle.

Austrian preparations for the assault had rested on a friendly priest within the walled city who, in late January, arranged for a strategically located sewer grate to be opened, allowing a vanguard of special troops to enter Cremona under cover.

In the early hours of February 1st, they were joined inside by several thousand more, with a second large force descending. Hence Conan Doyle’s opening verse, in which the defenders’ cause seems lost already:

But not quite. Before the second Austrian wave could enter, a group of Irish troops closed the city’s crucial Po gate amid heavy fire. Thereafter, a Major Daniel O’Mahony led the defence for which, famously, his countrymen did not have time to get fully dressed.

Here’s Doyle again: “Major Dan O’Mahony is in the barrack square/And just six hundred Irish lads are waiting for him there;/Says he ‘Come in your shirt,/And you won’t take any hurt/For the morning air is pleasant on Cremona’.”

The morning air may have been pleasant. But during a battle that raged throughout St Brigid’s Day, the Irish were to suffer heavy casualties. Both sides, meanwhile, sought victory by diplomatic manoeuvring.

First MacDonnell, who had intervened to save the life of the French commander Villeroy, was induced to join the French on better terms.  Being an honourable man, he refused.

Then he in turn was tasked to offer an ultimatum to his fellow Irish officers on the other side – better paid work in the service of Austria, or death in a losing cause.

They in turn refused a career move in this early version of the January transfer window, instead placing MacDonnell under arrest.

The Irish Brigade fought on and held the town, at great cost, with survivors outnumbered by dead.

Doyle was nonetheless cheerful: “Just two hundred Irish lads are shouting on the wall;/Four hundred more are lying who can hear no slogan call./But what’s the odds of that./For it’s all the same to Pat/If he pays his debt in Dublin or Cremona.”

The long memories of exiled Irish soldiers were costly to the enemies of their newly adopted countries throughout the 18th century.

At Fontenoy in 1745, it was a generation born abroad that went into battle for France shouting “Remember Limerick” and turned the day against an Anglo-Dutch alliance.

That was part of another multinational conflict, the War of the Austrian Succession, and its effects may have included postponing the French Revolution for a generation. Certainly, Napoleon thought it had prolonged the “ancien régime” for 30 years.

Ireland’s glory aside, the Battle of Cremona was probably less influential in the greater scheme.