Newton Emerson: Spare us the war talk from Westminster 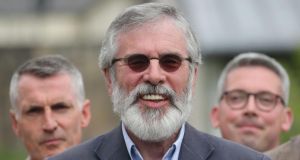 Sinn Féin president Gerry Adams. “There is an extent to which Adams is always still voiced by an actor.” Photograph: Niall Carson/PA Wire

If you want to know what the DUP-Tory deal means for power-sharing and the peace process you need only listen to Gerry Adams, the one person inclined and positioned to pull the plug on either. The Sinn Féin president acknowledged the claim by both parties to the deal that they will “fully adhere to the Good Friday Agreement and its successors”. On the financial package, Adams said it could “ease the enormous pressure on our public services” but Stormont is “the only decision-making body” that can allocate the money fairly.

“We may be able to say: ‘Well done, Arlene’,” he concluded, “when we have the executive in place.”

So there you have it: the peace process remains intact and devolution will be restored as soon as republicans can find a sufficiently face-saving way to return to office.

Adams did say the deal “provides a blank cheque for a Tory Brexit which threatens the Good Friday Agreement”. However, this was his position on Brexit long before the deal and the election that made it necessary, so he was not conjuring up a new threat. He was just being pompous and narky, as he was when saying: “Well done, Arlene.”

There is an extent to which Adams is always still voiced by an actor.

If Sinn Féin had wanted to make trouble over the deal, it could have done so with ease. The British government has included pledges on Troubles prosecutions and a military covenant that intrude directly into Stormont talks issues, existing agreements and devolved powers – exactly what everyone assumed would not happen.

The pledges are symbolically significant yet almost certainly meaningless in practice – ideal grounds for a classic Stormont stand-off. In deciding to ignore this, Adams could not be making his intentions any clearer.

Even without these pledges, of course, Sinn Féin could simply have misrepresented the deal as breaching previous agreements, as it has done with Brexit, an Irish language act and all its other excuses for collapsing Stormont in the first place.

For completeness, the reaction of the Irish Government – co-guarantor of the peace process – should be noted.

In a statement issued from the Stormont talks, foreign minister Simon Coveney welcomed the “recommitment” of the DUP and the British government to the agreement and noted an improved outlook for devolution and Brexit.

All of this is obvious to people in Northern Ireland. Belfast’s newspapers and broadcasters were unanimous in judging the deal to have hastened Stormont’s resurrection. Nobody suggested the slightest threat to the peace process.

Yet in London, lurid headlines on air and in print pronounced the demise of the agreement and implied a threat not just to the process but to peace itself. The Independent, now an online-only publication, was specific: “Gerry Adams says DUP deal threatens Northern Ireland peace,” it declared.

Some of this reporting was due to ignorance and the natural attraction of journalists to catastrophism. However, much of it has taken a steer from prominent figures at Westminster, on both sides of both houses. In the days leading up to the deal, former Conservative prime minister John Major and Tony Blair’s former chief of staff Jonathan Powell were among those warning of a return to violence. Within hours of the deal being signed, Labour shadow foreign secretary Emily Thornberry told the Commons that the agreement was “in jeopardy” and questioned “the future of peace in Northern Ireland”, causing DUP MP Ian Paisley to express his “utter despair” at the constant suggestions from Labour’s front bench “that people will in effect go back to war because we intend to spend £1.5 billion on services”.

Despair has verged on farce in the case of Peter Hain, a Labour former Northern Ireland secretary, who has sombrely spoken of threats to peace because the Tories are no longer “impartial”.

Hain oversaw years of DUP-Sinn Féin talks to restore Stormont, despite spending his entire political career up to that point calling for “British withdrawal”, including at one point welcoming “loyalist revolt” as advancing a united Ireland. He refused to recant these positions throughout his time in Belfast.

The heralds of doom in Westminster tend to be Labour tribalists or Tory Europhiles. These loyalties apparently override any connections with Northern Ireland. Major is credited with initiating the peace process, while Hain and Powell wrote books claiming a pivotal role in it, yet that has not stopped them making implausible predictions of disaster.

Adams rounded off his verdict on the deal with a jibe at the DUP, quoting unionist founder Edward Carson: “What a fool I was. I was only a puppet, and so was Ulster, and so was Ireland, in the political game that was to get the Conservative Party into power.”

That is only the half of it.

Northern Ireland is now embroiled in Westminster’s games to get a Conservative leader out of power – and nobody seems to have the slightest compunction in using war as a rhetorical weapon.