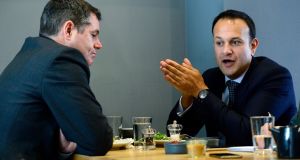 Leo Varadkar is 38. His first vote was in the general election of 1997, when Bertie Ahern snatched victory from under the noses of a competent but politically clumsy Fine Gael-led government.

Ahern grabbed the leadership of the country just as the economic boom was beginning to gather pace. His minister for finance, Charlie McCreevy, poured petrol on the roaring bonfire of the Celtic Tiger and Ahern rode the electoral dividends for two more general election wins.

The Ireland of Ahern and McCreevy was the Ireland in which Leo Varadkar came of age, developed his political sensibilities, found his bearings and, in time, made his political bones. The boom was the backdrop to his formative years. It cannot have left him unmarked.

By the time he turned 21, in the first month of the new millennium, he had already fought his first local election, finding himself subjected to a predictable monstering. They were lean times for Fine Gaelers in Mulhuddart.

Anyone who joins Young Fine Gael in school and writes letters to The Irish Times when his friends are busy making fake IDs so they can get into nightclubs cannot be representative of his generation. But he cannot be unmarked by their world, either.

Varadkar is hardly an average 38-year-old. But he is nonetheless a child of his time

Varadkar had chosen his path in life at a time when the most significant choice made by most of his peers was whether to play Robbie Williams’s Millennium or Prince’s 1999 at the New Year’s Eve parties of that year.

So he is hardly an average 38-year-old. But he is nonetheless a child of his time. Understanding that is key to understanding how politics is changing with his accession to the State’s highest political office.

With the departure of Kenny and Michael Noonan, the leadership of the country is passing to an entirely new generation of politicians – Varadkar, Paschal Donohoe (especially), Eoghan Murphy, Simon Coveney, Simon Harris (if he survives) and a scatter of upwardly mobile junior ministers. All thirtysomethings and fortysomethings.

One of their number jokes: we’re going to look around and wonder if Enda and Michael Noonan will let us do something. And then we’ll realise: we’re in charge. Some of them have the good sense to be daunted by the prospect.

This generation inhabits a political and intellectual world that is far away from the tribal certainties of the old duopoly that bred politicians such as Kenny and Noonan. Kenny was elected before Varadkar was born. Noonan became a councillor in 1974.

Look at those old ard fheis films. Watch out for Noonan and his old combover and Kenny with his wavy hair and boyish grin in them; different world. Varadkar and Donohoe didn’t need to highlight their hipster-generation credentials by bringing coffees and cupcakes to the press in Stoneybatter (where else?) at the start of the campaign, but they did.

The generation shift is profound and stunning. Frances Fitzgerald and Richard Bruton and Charlie Flanagan may all be kept on in Cabinet (or not) but the power has shifted to the next generation.

We were doubtless the most sexually promiscuous generation of young Irish people, but what would have shocked our parents more was our political promiscuity

But it’s not just the personnel, it’s the politics. The economic boom that defined the growing-up years of Varadkar and his tribe accelerated the de-anchoring of political allegiances. No longer was it possible to talk meaningfully of Fine Gael families or Fianna Fáil families.

We were doubtless the most sexually promiscuous generation of young Irish people, but what would have shocked our parents more was our political promiscuity. Bertie won and held our votes with his distinctive brand of You’ve Never Had It So Good (and we hadn’t). We dropped him and his successor like a tepid latte when it wasn’t so good any more, rushing to Fine Gael and Labour in 2011. That went sour too; we find it hard to commit.

The spirit of the age was consumerism; the acquisition of stuff was an end in itself. Cars, holiday experiences (Lonely Planets occupy a lot of our bookshelves), then houses. Lately this seems to have been diverted relatively harmlessly (and certainly less expensively) into tattoos.

As in life, so in politics. The politics of the Varadkar-Donohoe generation is a version of consumer behaviour, as political identities take on the characteristics of consumer loyalty: conditional, shallow, constantly reviewed.

That’s one of the reasons why it is so demanding. Their generation (this writer among them) buys goods online and sends them back when they don’t match the description. Varadkar is a student of and thinker about politics, but his peers are less interested and more transactional. They prioritise delivery of public services, a hard beat for any politician. Their expectations are framed by the market efficiencies that pervade their consumer lives.

If you want a 1970s green-nibbed Mont Blanc pen, or Depeche Mode vinyl, you can go online and buy it. If you want a place in a nondenominational Gaelscoil for your child – well, sorry, it might not be available. And politicians get the rap for it.

Leo and the lads will certainly understand this because it is the animating force of much of their direct political experience. They are the generation of record incomes, long hours, unaffordable houses, excruciating childcare costs, crowded schools, crap pensions. And high expectations.

Their peers expect better public services, they know they pay for them and they believe it is the job of politicians to provide them.

This weekend, many people home and abroad will be shaking their heads in wonder at the idea of the gay son of an Indian immigrant, not yet 40, leading Fine Gael, and in due course the country. Whatever your politics, it is quite something. But the novelty will wear off soon enough. He will be judged by his peers according to the mores of their times and their politics.