Pat Leahy: Leo Varadkar has learnt from the Ahern playbook 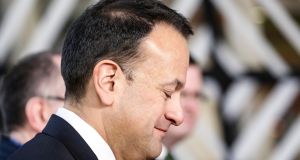 The keenest students of successful politicians are often the successors of their defeated opponents.

Tony Blair served his political apprenticeship watching Margaret Thatcher (and her heir, John Major) hammer Neil Kinnock. With the zeal and clarity of purpose that comes from chafing under repeated defeat, Blair and his fellow members of the New Labour triumvirate, Gordon Brown and Peter Mandelson, learned from Thatcher’s appeal to the aspirational classes, the white van drivers who became Mondeo owners and transferred from the Conservatives to Labour for three elections.

Growing up in opposition under Labour’s rule, David Cameron and George Osborne privately called Blair “the Master” and sought to emulate his communications style and centrist appeal.

Leo Varadkar grew up during the hegemony of Bertie Ahern, when the three-time taoiseach dominated Irish politics so comprehensively that he appeared to make the entire political firmament orbit around him. Ever a student of politics, Varadkar watched and learned.

With command of parliamentary proceedings (before the days of confidence-and-supply anyway), the possession of the ultimate political tool of executive action, and the civil service communications capacity at its direction, the Government usually dominates the political agenda.

All parties will seek to use their position in Government to political and electoral advantage. There are conventions and rules about this: civil servants, for example, are prohibited from working on clearly political matters. These distinctions can sometimes be fuzzy, but they are important. They are especially important now.

The creation of the Strategic Communications Unit (SCU) in the Department of the Taoiseach has significantly expanded the communications reach of Government.

You may have missed the rows over the SCU. But you’ll have heard and seen, no doubt, various advertisements of late describing the many wonderful initiatives that the “Government of Ireland” is taking on your behalf, and the many ways in which the same Government of Ireland is improving your life and local community, bringing to an end the scourges of poor planning, underinvestment in rural Ireland, underinvestment in urban Ireland, wet summers, dodgy referees, sour porter and bad spuds.

The Opposition parties, and especially Fianna Fáil, believe that when the casual radio listener or newspaper reader sees or hears of the mighty work of this Government of Ireland, they understand that it is in fact Leo Varadkar and his Fine Gael Ministers who are behind the State’s benevolence.

In other words, the Opposition thinks that the output of the SCU is Fine Gael communications and advertising masquerading as Government information; they say that this is Fine Gael abusing the power of government to its own political advantage.

Fianna Fáil has rarely been so exercised about something. Micheál Martin basically raises it every week in the Dáil.

He raised it twice this week, citing the energetic promotional efforts of the unit following the publication of the National Development Plan and the National Planning Framework last week – an advertising campaign that included press, online, cinema and so on.

Most of the Fianna Fáil TDs who spoke in the Dáil debates about the plan this week referenced the advertising campaign. They are especially enraged about all the ads in local papers, which appear to have been enjoying something of a bonanza.

I think part of the reason why Fianna Fáil TDs are in a state of high agitation is this: they’re afraid it’s going to work. No party better understands how the levers of government can be used to political effect than does the former natural party of government.

The principal mechanism for this is the “delivery” of resources, services, projects and public spending to communities and locations across the country, with the local TD or Minister seeking to take personal credit, and translate that credit into votes.

Perhaps the outstanding example of this comes (as so many do) from the high Bertian era. In the first six months of 2002, with Fianna Fáil approaching its first attempt at re-election, Charlie McCreevy turned on the exchequer’s taps, increasing public spending by an astounding 22 per cent over the previous year.

The extent to which Ahern and McCreevy believed that their route to electoral success was showering resources on communities tells us about how a lot of people saw Irish politics then. But have our political appetites changed since?

The extent to which the Government is flogging the National Development Plan – and the high dudgeon of Fianna Fáil at this – suggests it hasn’t disappeared completely.

Last summer, a Cabinet Minister told me that Varadkar’s administration would communicate the work of Government in a political context.

But what does this mean? I asked.

“Well, you take childcare,” said the Minister, referring to a series of new childcare subsidies to be introduced in the autumn. “We’ll be turning Government activity into a Fine Gael message.”

Within minutes of the launch last week of the National Development Plan, the Fine Gael website went live with news of what was in the plan for each county.

Significant advertising and communications spending by Government – such as the SCU has embarked on – introduces a new challenge to the proper boundaries in the civil service between politics and Government.

The prohibition on the use of civil service time and resources for political ends might seem arcane, but it’s actually a cornerstone of an effective democracy. Government confers political advantage, and it’s important that those advantages be controlled and policed. There needs to be strict controls and transparency on the activities and spending of the SCU.

Responding to questions in the Dáil this week, Varadkar observed that he had “learned from the masters of political communication”. That’s exactly what we should be afraid of. If this wasn’t good enough when Bert and the lads were doing it, then it’s not good enough when Leo and his lads do it either.