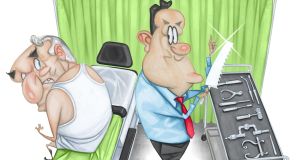 Bright, articulate and with a knowledge of medicine, he is well placed to inflict pain on the Government - as long as he doesn't bite off more than he can chew, writes Carl O'Brien

Bertie Ahern rarely shows a flash of anger. Even at the height of incendiary Dáil debates, as Opposition politicians repeatedly lob verbal grenades in his direction, the Taoiseach usually remains stonily impassive.

All that changed a few days ago. In one of his first contributions to the Dáil, Fine Gael's rising star Dr Leo Varadkar - a 28-year-old trainee GP - lashed out at Ahern's flawed pedigree and provoked a waspish counter-attack from the Taoiseach.

Not since Ahern accused former Socialist Party deputy Joe Higgins of being a "failed person" who should just "go away", or Fine Gael's Gay Mitchell of being a "waffler", has someone managed to get on the Taoiseach's nerves so effectively.

The words which rankled so much with Ahern came towards the end of Varadkar's contribution to Fine Gael's no-confidence motion in the Taoiseach.

"Sadly," Varadkar intoned gravely, "this dark affair will darken the Taoiseach's record in the same way as Tony Blair's involvement in Iraq or Bill Clinton's personal scandals darkened theirs. History will judge the Taoiseach as being both devious and cunning, in the words of his mentor, master and, clearly, role model."

Ahern was stung. Not content with answering back, he lashed out at the new deputy a few days later and by way of a personal article published in a Sunday newspaper last week.

"When you hear a new deputy who isn't a wet day in the place not alone castigating me, but castigating Tony Blair and Bill Clinton, I wish him well. I'd say he'd get an early exit," Ahern said, with a hint of a malevolent smile.

Varadkar's rise within Fine Gael has been nothing short of meteoric. Just three years ago, he wasn't even a county councillor, not to mind a rising star in the party. Then, in the 2004 local elections, the trainee GP secured the biggest vote in the entire country.

He was comfortably elected to the Dáil last June in the bear-pit of Dublin West, a tightly contested three-seater constituency. Of all the young Fine Gael TDs elected to the Dáil this summer, he was the only one to secure a frontbench portfolio. He has even spoken openly about winning a ministerial job in a rainbow government.

Few were surprised, therefore, that he launched into an attack on the most powerful man in the Dáil during his first week in the Oireachtas with such confidence and vigour. Some in Fine Gael, however, are divided over this brash and ambitious face of the party.

"He took on Bertie like a heavyweight boxer trying to take out an opponent in the first round," says one deputy. "He's going to have to learn to pace himself out over 15 rounds instead."

"He's bright and articulate and very sure of himself, but that can rub up against people the wrong way," another TD observes. "I'd be wary of anyone who builds up a huge expectation so early on."

Others say he is exactly what Fine Gael needs if it is to provide a vigorous opposition over the life-time of the current government. "He's incredibly bright. He's the kind of person we want out there," says an admirer. "Fianna Fáil spared no time going after Nora Owen and others when we were in government. It's time for a taste of their own medicine."

Clearly Varadkar has the support of the party hierarchy, with Enda Kenny appointing him to the prominent position of enterprise spokesman. Despite being a new face in the party, he is, in many ways, an old-school, core values, right-of-centre Fine Gaeler. He believes in a strong law-and-order response to crime; he talks passionately about free market economics; and he waxes on about the need for integrity in public life.

Could he be - whisper it - the Michael McDowell which Fine Gael never had on its benches, yet craved for so long? A clue to Varadkar's stunning political success lies in how he has campaigned in the Dublin West constituency since he was elected as a councillor in 2004.

Over the last few years he has displayed a sharp eye for attention-grabbing publicity stunts and a finely-honed radar for populist causes.

Take the example of plans by Boots to open a methadone dispensing unit for recovering heroin addicts in a pharmacy in the Roselawn shopping centre in Castleknock.

Varadkar circulated literature around the area alerting people to the plans for a "methadone clinic" in the area, fired off declamatory press releases, and organised a major public meeting which hundreds attended. In the face of seething public anger, the managing director of Boots appeared at the meeting and announced the plan would be reversed.Varadkar didn't so much jump on a bandwagon as kick-start the entire show.

He has also made a number of controversial statements, such as supporting mandatory baptism certificates for children attending over-subscribed schools in the Porterstown parish, part of his constituency.

As well as eye-catching policy initiatives, he's not beneath using the odd tawdry election gimmick either; during the election campaign, for example, he distributed hundreds of Lion bars, emblazoned with the logo "Vote No 1 Leo the Lion".

Varadkar owes his distinctive name to his Indian-born father. Dr Astok Varadkar met his wife Miriam, a nurse from Waterford, when both were emigrants working in England. The family moved to Dublin, where Leo was born, in the mid-1970s. His parents now run a clinic in Castleknock where his father is a GP and his mother is the practice manager. It wasn't a political family, although he jokes that he recently discovered that his uncle was a socialist mayor for the city of Malvan in India.

While a student in the privileged setting of King's Hospital boarding school in Palmerstown, he joined Young Fine Gael. Friends who knew him at the time say he wasn't quite a young fogey in the mould of William Hague, who famously addressed a Tory party conference as a 16-year-old, although his ambition was evident early on. He is still friends with many of his contemporaries, including Fine Gael TD Lucinda Creighton, who was also elected to the Dáil for the first time this summer.

As a 20-year-old medical student in Trinity, he found time to run for the party in the 1999 local elections in Mulhuddart. He bombed in the poll, coming home in sixth position. Despite this, he continued to juggle his medical and political career, becoming campaign manager for Senator Sheila Terry in the Dublin West area.

He inherited her seat on Fingal County Council in October 2003 after she was forced to vacate it under the dual mandate system.

Ever since his impressive victory in the local elections a year later, there has been major tension between Varadkar and Terry. While both have different explanations for what happened, Varadkar was soon installed as the Dáil candidate for the constituency, much to the annoyance of Terry. She has since resigned from the constituency operation and did not campaign for Varadkar in the recent general election.

For all the dark mutterings about Varadkar, in person he is polite, confident and has the appearance of a sober-suited businessman. He is well aware that the Fine Gael party is littered with the carcasses of young know-it-all politicians whose careers fizzed brightly before expiring quickly.John Deasy, the uncompromising former justice spokesman, was tipped for great things before being dismissed from the party's frontbench a few years ago for smoking in the Dáil bar. Brian Hayes was also talked about as future leader material at one stage, before his hectoring style rubbed many up the wrong way and he lost his seat.

As for now, Varadkar is voraciously reading up on his new brief as enterprise spokesman. He'll have a busy time of it over the coming years, with dark clouds looming on the economic horizon. His knowledge of medicine could come in handy, too, as he seeks to try to inflict more pain on an embattled government.

If Varadkar faces any one challenge it's that he could backfire McDowell-style by building up too big a profile and turning off the public in the process. It's an observation shared by a few of his constituency rivals.

"He's a young man in a hurry, there's no doubt about that," says one. "The only danger is that he'll trip himself up in the process."

Who is he?
A newly-elected 28-year-old TD for Fine Gael, recently appointed to a frontbench portfolio in the party as enterprise spokesman

Why is he in the news?
Varadkar managed to get under the skin of Bertie Ahern with what the Taoiseach described as "gutter comments" about him in a recent confidence motion

Most likely to say:
"Bertie's credibiliity is in tatters and he should resign now - the people deserve nothing less"

Least likely to say:
"As a humble TD with little experience, I am not qualified to cast judgment on a Taoiseach with 30 years of distinguished service to the State"