Parties already have more women candidates for election than in 2011 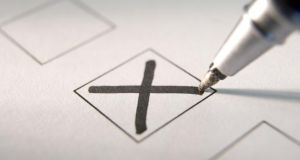 ‘The quota will rise to 40 per cent seven years after the upcoming general election.’ Photograph: Getty Images

I was taken aback by the sheer number of accomplished and inspiring women gathered in the one place. Perhaps others who attended the Beijing20 conference, organised by the National Women’s Council of Ireland and the Irish Human Rights and Equality Commission, in Dublin Castle last February might have felt the same. One would have been forgiven for, when glancing around the room, believing that Ireland is doing exceptionally well when it comes to gender equality. The conference heard from a range of women in public life and academia including former President Mary Robinson, the current Garda Commissioner and Minister for Justice.

The list of women in public life in Ireland today has certainly grown, with the Tánaiste, Attorney General and, for the first time, Director of Public Prosecution all women. Things have certainly changed since 1995 when 189 countries, including Ireland, came together in Beijing and adopted a roadmap for the advancement of women’s human rights worldwide.

However, without proactive measures, the pace of change is painfully slow. In 1995, the Dáil comprised 12 per cent women, with only a 4 per cent increase in the interim.

Labour are leading when it comes to formally selecting women candidates at 44%, with Sinn Féin on 38%, Fine Gael 31%, People Before Profit 38%, Green Party 14%, Renua 27% and Fianna Fáil 22%. Though the quota is not applicable, non party women candidates are on 30.2%.

“I didn’t get to where I am because of my gender, I didn’t need help, so therefore I don’t believe in quotas”, say many. In reality, quotas don’t get anyone elected. The debate is often so insular and centred on those already at the table, we neglect to consider those absent from the table. Across all genders, members of the travelling community, migrants and persons of different ethnicities are such absentees.

Education institutions often act as a mirror for wider society. Over 50 per cent of the higher education population are women yet, just 19% of university professors and, out of seven universities, three of the registrars are women.

As we were shown in Dr Micheline Sheehy Skeffington’s successful action in the Equality Tribunal, 84 per cent of senior posts in NUIG are held by men, exemplifying the environments in which women must function. To address this, the Minister for Education and Skills this year launched the Athena Swan programme in Ireland, whereby institutions have signed up to a charter to tackle gender imbalance. The HEA has also set up an expert group to report next year to examine gender equality in higher education.

The overall representation of women within students’ unions has hovered around 20 per cent. In St Pat’s where women account for over 66% of students, in 20 years just four Students Union presidents were female. Many students’ unions have adopted campaigns to encourage women to run and working with Women for Election, there has been a promising increase in women running this year. In the business world, women account for just 9 per cent of senior company board positions in Ireland, and fewer than one in four voices (presenters and guests) in news and current affairs programmes are women.

We can talk all we want about breaking glass ceilings but there are also sticky floors. When one woman or member of a minority group breaks a glass ceiling, it often doesn’t help those who are stuck on the floor below. We can’t become so fixated on numbers and percentages, and thereby neglect to tackle the ingrained inequality that affects people in their everyday lives, and how that inequality intersects with other areas such as income, ethnicity, ability or age.

It’s hard to comprehend that for many of my generation, our mothers or grandmothers remember a world where women had to resign from the public service when they got married, weren’t allowed to sit on a jury, were unable to refuse sex to their husbands, weren’t able to get a barring order against a violent partner and couldn’t collect what was then the Children’s Allowance in their own name. How will our children or grandchildren view this time? The fact that Article 41 of the Constitution still ascribes a woman’s role as within the home; the lack of access to abortion services; the levels of gender-based violence; the gender pay gap; and the lack of affordable childcare may serve as factors for our indictment as a discriminatory society for women.

Laura Harmon is a long-term campaigner on equality issues and former president of the Union of Students in Ireland.

1 ‘IRA has gone away’: McDonald responds to Garda Commissioner’s comments
2 A Dad with brain cancer: I was given 18 months to live, it put things into perspective
3 Drug dealer loses codes for €53.6m bitcoin accounts
4 Woman found living in squalor with flies coming from blanket she was using
5 Who turned up to the Dublin casting call seeking ‘bone thin, amputees, crooked teeth’?
Real news has value SUBSCRIBE