Blame our troubles on the 1990s – the decade that never ended 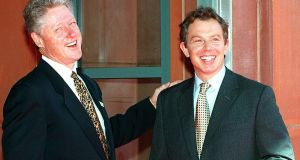 In a time of perpetual crisis, the feeling of longing for an idealised past in which nothing much happened can exert a powerful pull. The tempting counterpoint to this decade of upheaval is the 1990s – the period in between two world-changing events, the fall of the Berlin Wall and the 9/11 attacks, when history had come to an end, the world economy was booming and The Sopranos remade television.

Nostalgia for the last decade of the 20th century is a particular kind of western indulgence, of course. These years encompassed the Rwandan genocide, bloody civil wars in Congo and Liberia and the violent break-up of Yugoslavia.

Yet the idea of the 1990s as a holiday from history, as the American conservative George Will put it, retains a persistent hold. This was the era of Clintonian triangulation, when joblessness in the US was effectively zero and the murder rate fell by 41 per cent. In Britain, the Thatcher years had given way first to John Major, whose “back to basics” offer was a direct repudiation of highfalutin big ideas, and then to Blair’s Third Way.

There was an economic boom, a real one built on foreign investment and EU structural funds, which helped Ireland catch up after years of lagging behind in Europe

The continent was dominated by the axis of Helmut Kohl and François Mitterrand, two leaders born before the war, who drove European integration as a peace project. Their successors typified the era: Gerhard Schröder was a fully paid-up member of the New Labour fan club, while Jacques Chirac’s brand of pragmatism would not have been out of place in a Fianna Fáil cumann in Mullingar.

The collapse of communism produced a strain of western triumphalism, typified by Fukuyama’s “end of history” thesis, which held that liberal capitalist democracy had won out because the natural desire for peace and wellbeing set nation-states on that inevitable course. Western capitals assumed that the Chinese Communist Party would eventually submit to that logic. Russia was defeated and seemingly in long-term decline. And peace and prosperity was spreading. In South Africa, the dismantling of apartheid went more smoothly than many had feared, while the Oslo Accords between Israelis and Palestinians seemed to be the breakthrough that would lead to a settlement.

These were the years that gave us Infinite Jest, Britpop and The Simpsons. The internet had arrived but had yet to split mass culture, and most of the digital perils that we agonise over today – cyber-terrorism, election-rigging, the loss of shared human experience – were still science fiction. The biggest source of global angst late in the decade was a crisis, Y2K, that was literally a non-event.

In Ireland, this was the era of the Robinson presidency, of two World Cups, the ceasefires and the Belfast Agreement. There was an economic boom – not the credit-fuelled mirage that formed in the mid-2000s, but a real one built on foreign investment and EU structural funds, which helped Ireland catch up after years of lagging behind in Europe.

Little wonder that 1990s nostalgia retains such force 20 years later. Yet, look more closely and it’s hard not to notice that many of today’s problems have their roots in that romanticised era.

In Ireland, where Charlie McCreevy was appointed minister for finance in 1997, a failure to read the economic cycle was, within a few years, to produce an artificial credit boom followed by a historic collapse. The single European currency, brought to life in the late 1990s, was conceived as a political, rather than economic, project, and inherent design flaws that were overlooked because of that political imperative were partly to blame for the crisis that would hit the continent from 2009. That crisis prompted governments to impose harsh austerity, which hit services and incomes and contributed to the growth of the populist movements of the late 2010s.

Without us even noticing, today’s crises were taking shape. That’s worth keeping in mind as the current decade splutters to a close

It was a decade of warnings that went unheeded. In 1990, the UN’s Intergovernmental Panel on Climate Change published its first assessment – a chilling document that described “potentially the greatest global environmental challenge facing humankind” but failed to break through into public consciousness. In the US, major financial deregulation was laying the groundwork for the Great Recession, while a jihadist lorry attack on the World Trade Center in 1993 was dismissed as a one-off.

In Britain, Ukip was born in the aftermath of the country’s ejection from the exchange rate mechanism in 1992, while euroscepticism was beginning to make the Conservative Party ungovernable. Whatever one’s view of Blairism, the estrangement of the party’s working-class vote, which would culminate in the Leave vote in 2016, was accelerated by the reaction to Labour’s centrist project. Without Blair, there would be no Jeremy Corbyn, and without Corbyn, arguably, there would be no Brexit. Meanwhile, from the chaos of post-Soviet Russia, amidst painful shock therapy and a widespread sense of humiliation and loss, a young KGB officer, Vladimir Putin, was on the rise.

Quietly, without us even noticing, today’s crises were taking shape. That’s worth keeping in mind as the current decade splutters to a close. Forget the 2010s. The 1990s haven’t even ended yet.