On a literary journey with the main protagonist (within 5km)

An Irishman’s Diary travels from Fowler to Flann, via Shelley and Keats 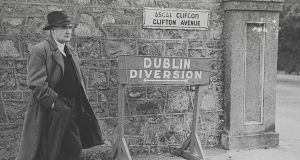 ‘I suspect Keats doesn’t feature much in the latest collection of essays from the Journal for Flann O’Brien Studies: entitled “Gallows Humour”.’ Above, Flann O’Brien. Photograph: The Irish Times

A reader of yesterday’s column has taken me to that always unpleasant venue, Task, over my use of the phrase “main protagonist”.  Since the context was French, he suggests that the word “main” was “de trop”. To which I shrug my shoulders and say: “peut-être”. But so doing, I also reach for my 902-page copy of Fowler’s Dictionary of English Usage and open it letter P.

It is true, as the dictionary notes, that “protagonist” comes from Greek drama, where it referred to the chief personage in a play, and no-one else.  In an ancient Hellenic version of the Oscars, therefore, the award for best supporting actor would have gone to the “deuteragonist”.  With a strong cameo, even the “tritagonist” might have been in with a shout.

As the latter-day Fowler admits, the original Fowler – HW, who published the first edition in 1926 – was a stickler on this point, for partly personal reasons. “It is understandable that as a distinguished classical scholar he should cleave to the original, technical meaning,” writes his successor.

But as long ago as 1671, John Dryden introduced the plural “protagonists” into English. Which, along with such qualifiers of the singular as “chief”, “leading”, “main”, etc, has since become “standard”. “[W]hile strictly speaking they could be viewed as tautological,” concludes modern Fowler, “it is unlikely that anyone nowadays will view them as such.”

That verb “cleave (to)”, by the way, is a good example of the treachery of English. There you have a word one of whose meanings is the opposite of another.  To “cleave to” something means to be inseparable from it, while the other cleave means to “split”. The two kinds of cleavage cannot possibly be reconciled except, arguably, by certain push-up bras.

But speaking of Dryden, it is to him we owe one of the more stupid supposed rules of English: the ban on ending sentences with prepositions.  He came out against the habit in 1672, for no good reason. Then a grammarian put it in a book, and we have been stuck with it ever since. It is one of two grammar “rules” everyone seems to remember.  The other, just as baseless, is the split infinitive: being corrected on which is one of the things that always makes me want to reach for a cleaver.

*** This weekend marking John Keats’s birthday, I’m reminded of a story involving an Irishman, John Wilson Croker. It’s a cautionary tale for literary critics, especially the cleaver-wielding kind. Because long after Keats’s demise, it was widely believed that a bad review had killed him.

His friend Percy Bysshe Shelley diagnosed this with as much certainty as if he had performed the autopsy: “The savage criticism of his Endymion, which appeared in the Quarterly Review, produced the most violent effect on his susceptible mind; [causing] the rupture of a blood-vessel in the lungs; a rapid consumption ensued, and the succeeding [positive notices] were ineffectual to heal the wound”.

As we now know, this wasn’t medically accurate.  But in the meantime, it and similar indictments of the review made life uncomfortable for the journal’s editor, William Gifford. There were no bylines then, so he was presumed responsible. In fact, Gifford was only the deuteragonist. The protagonist was Croker, a Galway-born lawyer and MP who was a poet, but of the older style then going out of fashion.  To mix genres and eras, Croker was like an angry punk rocker, circa 1982. He hated the New Romantics.

Keats’s name was “writ in water”, according to his epitaph. But it is also writ in the work of Myles na gCopaleen, aka Flann O’Brien, late of this parish. His comic duo Keats and Chapman embarked on a epic series of preposterous adventures, the sole aim of each was to arrive at a pun, the more tortured the better. Keats usually had the dubious honour of delivering it.

I suspect Keats doesn’t feature much in the latest collection of essays from the Journal for Flann O’Brien Studies: entitled “Gallows Humour”. But what does, according to the blurb from Cork University Press are themes of “violence, justice, capital punishment, eugenics, prosthetics, skin, prostitution, syphilis, rape, reproduction, illness, auto-immune deficiency, drinking, Gaelic games, and masculinist nationalism”. And that’s plenty to be going on with*.  (*So sue me, John Dryden).

The book will be launched online tonight, at an event involving all the main protagonists.  Any antagonists (no relation, and don’t get Fowler started on that) will be dealt with by Zoom security.