Now Showing: My Journey To Self-Improvement, a Harvey Weinstein Production 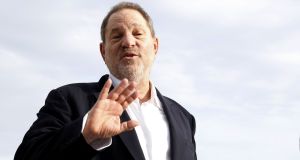 A famous musician phoned a few months back to apologise for once physically threatening me. As we chatted amiably about crack cocaine and death threats, it became clear that my name was on a “make direct amends” list he had been handed by his agent. As part of his 12 step programme he was “reaching out to those I have harmed in the past”.

His “apology” - made from a distance of 8,000 miles away - was as cheap and as clichéd as his music. A box-ticking exercise for a court-appointed duty.

Sorry seems to be the easiest word - when a prison sentence or your career depends on it.

We’ve learned a lot about Harvey Weinstein since the New York Times chronicled accusations that the film executive sexually harassed employees and actresses over a period of decades.

Weinstein’s subsequent public apology last week informed us - inter alia - that he had the misfortune to - as he says himself - “come of age in the 1960’s and 70’s when the rules about behaviour and workplaces were different”.

He now “realises the need to be a better person”. This he will achieve by embarking on “a journey to learn about myself”. Keeping him company on his journey will be “a team of therapists”.

His apology, issued just days after the Las Vegas shootings, ended with a pledge that he would now use his proven cinematic skills to go after the NRA (the National Rifle Association) and also go after President Trump in films he plans to produce.

As some measure of his magnanimity he also promised to give $5 million to a charitable foundation he is setting up to provide university scholarships to aspiring women film directors. “The foundation will be named after my Mom, and I won’t disappoint her” he said.

With your consciousness-raising films and your charitable foundation largesse you are really spoiling us, Mr Weinstein.

Buried somewhere in this self-aggrandising braggadocio is the sentence “I appreciate the way I’ve behaved with colleagues in the past has caused a lot of pain, and I sincerely apologize for it”.

While Weinstein has his team of therapists patiently point out to him that taking off all your clothes in front of a woman you work with and asking her to massage you isn’t exactly 2017 workplace-friendly (and equally wasn’t so in the 1960’s and 70’s), he will have time to reflect that his boilerplate celebrity apology - what could be considered a hand-me down document from Lance Armstrong, Tiger Woods and Anthony Weiner - is no longer worth the Public Relations firm stationary it’s printed on.

There is now an established three-step programme for well-known figures to follow in the account of their being caught, figuratively speaking, with their hand in the till.

It’s a relatively benign process of public apology, well-publicised rehab stint and crying your eyes out on Oprah Winfrey’s couch for a prime-time viewing audience.

It entails diverting all attention from the errant behaviour which precipitated the need for a prompted apology and instead highlighting sympathy-seeking mitigating factors and foregrounding past virtuous contributions.

Lance Armstrong’s admission to Oprah Winfrey in 2013 that he cheated, bullied and lied consistently through his cycling career came with a very important caveat - “I didn’t invent the culture of doping” he said. Armstrong was merely participating in a doping culture that was already in existence - much like Weinstein’s assertion that the workplace culture he entered into somehow shaped his lecherous behaviour.

Golfer Tiger Woods’ public apology for his many instances of marital infidelity (which was broadcast live on TV stations in 2010) as with Weinstein’s apology last week - highlighted the work of his charitable foundation - even though the foundation had absolutely nothing to do with why he was making a public apology on live TV.

“Through my foundation, I envisioned helping young people achieve their dreams through education. To the young students we reach out to, our work is more important than ever” Woods told the watching audience.

Woods also mentioned he had hired therapists to help him on his journey to “become a better man”.

U.S. Congressman Anthony Weiner was in court last month (September) to face sentencing after been found guilty of sending lewd text messages to a 15 year old girl. His defence lawyers argued that he should not receive a custodial sentence because of his “remarkable career in public service” and his “vigilance in continuing his therapy” that was helping him become a better person. Asking for probation, his lawyers referred to his “childhood emotional trauma”. Weiner was sentenced to 21 months in prison.

That Armstrong, Woods, Weiner and now Harvey Weinstein all sincerely pledged - in their own way - to become better people and went to the trouble of providing us with “context” for their crimes or errant behaviour is perfectly understandable.

But all four apologies were made under duress - in that they were only made as a result of the media exposing their wrongdoing.

The problem with the extravagant praise public figures heap upon themselves coupled with the obfuscatory rhetoric used in their apologies is that it moves us - as it is designed to do - further and further away from the wrongdoing.

The apology becomes the story. What mitigating factors were proffered? Type and duration of therapy involved? How much financial restitution?

The behaviour Harvey Weinstein is now being accused of (and which has led to his dismissal from the Weinstein film company he founded) is still a depressingly antediluvian feature of today’s workplaces. This is what should be under scrutiny - not Weinstein’s psychobabble “journey” or his $5 million charity foundation.

In an essay by Jessica Pishko on the Aeon website last year about “The Strange Currency of Apologies” she argues that “the impact of the apology is too often tied to the subject’s social status - for powerful figures, apologies serve to restore order and rehabilitate a public image”.

Rock stars, film executives, politicians and sporting greats all recognise the potency of the carefully choreographed apology and its brand management value.

In his book, “Justice Through Apologies”, author Nick Smith details the characteristics of the sincere apology: identifying the specifics of harm, recognising the victims and disregarding self-interest. All three of which Harvey Weinstein neglected to get around to while informing us of his humanitarian future plans.

Weinstein’s public “apology” - like those of many before him - was simply one further transgression. It pulled focus away from the cast while soft-lighting the star of the show.