Brexit Britain: Country on the edge of a nervous breakdown

Eleanor Tiernan: For a migrant in the UK, it’s like sharing a house with a couple who are splitting up

The European Union's chief Brexit negotiator Michel Barnier says that talks over the continuation of the joint travel area between Ireland and the UK have advanced. Video: EU Commission 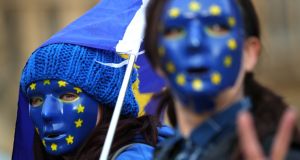 What’s it like observing an entire country having a nervous breakdown? Those of us living in the now utterly divided UK know the answer. It’s like being a lodger in a house with a couple who have decided to get divorced but can’t afford to separate. It’s lying awake at night listening to bickering in the next room. It’s sitting opposite both parties at the breakfast table, smiling sympathetically at the eye-rolls each are throwing behind the other’s back. And it’s all the while silently knowing that any expression of one’s own discomfort will be dismissed with the words “Well, if you hate it here so much, why don’t you just leave?”. Totes awks.

Now imagine that one of the reasons for the divorce is that the couple could not agree on whether to take in lodgers in the future. Naturally, in that situation your mere presence becomes an acute reminder of their failure to agree. It becomes impossible for them to see you beyond the uncomfortable feelings you bring. All you are is a lower lip, quivering as you warble, “Is this is about that time I got you out of bed at 2am to let me in? Because if it is that won’t happen again. I can change, I swear.”

This is what being a migrant in Brexit Britain is like. Surrounded by wounded divorcée landlords, hoping you don’t say the wrong thing to the wrong person. You find yourself appraising everyone you meet to discern which camp they fall into and thus the ground on which you can safely tread.

The Brexiteer is the party in the dispute who admits that the income from lodgers is required to cover the mortgage on the house but who wants to be able to apply more quality control to the kind of lodgers they allow in. They also have a strong suspicion that one of the lodgers has been helping themselves to their jar of Marmite and won’t be taken for a fool.

The Remainers are the ones drilling you at length about the profile of the UK in the outside world. To fully understand their position one must remember that the British are the people who invented manners and etiquette, and so in their eyes to treat a guest badly is unforgivable. One cannot overestimate how utterly wretched they feel at the poor impression this whole debacle must be giving those looking on. I’ve had a very positive experience of the country, but I still have to reach to find enough good things to say that will quell their fear that they are now regarded internationally as complete dumbasses.

The British government’s long refusal to make any commitments to migrants did nothing to ease the tension. Then came the hints in the media that there may be cut-off points on the number of migrants allowed to stay. The instinct here is for a migrant to wonder what they can do to cement one’s own inclusion in that group. Are my visits to the NHS being counted? Should I be wary of appearing too much like one of those benefits tourists? Maybe instead of going to the doctor I’ll see if this cough goes away on its own.

And then, 15 months later, came Theresa May’s guarantee to the Irish that she would maintain our freedom of movement under the Common Travel Agreement. Hurrah . . . I think.

Yes, it’s a relief: but to rejoice at this news seems a little bad taste when our fellow Europeans are still in the firing line. Wait. What? Did I just mention supporting my fellow Europeans? Where did that come from? Such sentiment would never have occurred to me before June 2016. What has happened in the meanwhile that could have created this newfound solidarity?

Could it be that so much prevarication on the matter of EU migrants’ rights by the British government has had the effect of galvanising those affected into a sort of cohesive group? That Brexit has succeeded where Erasmus programmes, pleas from Bono and 62 years of Eurovision song contests has failed?

By Jove, Brexit has only gone and forged for us an EU identity. How wonderful. This kind of thing could pave the way for a new era of growth and creativity. The only downside is that its creators will be restricted from enjoying the benefits of their greatest achievement.

1 Production at Brady’s Ham plant in Kildare stops after 80 staff test positive for Covid-19
2 Coronavirus: Residents in Kildare, Laois and Offaly urged to take extra care after cases spike
3 Scientists uncover biological signatures of the worst Covid-19 cases
4 Scarlet for ya: Paul Mescal does classic Connell in The Rolling Stones’ new video
5 How a ship abandoned by its owner brought deadly cargo to Beirut
Real news has value SUBSCRIBE