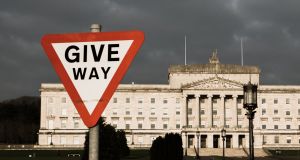 Despite all the bluster, the Protocol on Ireland and Northern Ireland is not going away and will not be abrogated. Photograph: iStock

This year is a census year. In the North, demographers are predicting that for the first time since partition, the number of people there describing themselves as Catholic may exceed the number of persons describing themselves as Christians of other denominations. That doesn’t mean that Catholics will be in the majority; it merely means that they will marginally outnumber non-Catholic Christians who we used to call the “Protestant majority”.

For one thing there will probably be a band of between 6 per cent and 10 per cent consisting of persons who don not describe themselves as Catholic or Protestant.

It is quite likely that there will be no Protestant majority in four out of the six counties or in the city of Belfast.

That change in the demography of religious identity is significant but is capable of being radically misunderstood. In political demographic terms, the Catholics will still be outnumbered by Protestants among those of voting age as distinct from all citizens or as distinct from those of working age.

Add to that the simple fact that religious adherence does not correspond exactly or closely with assumed voting intentions on Irish unity (however described) and there is no reason at this point to believe that it is probable that a majority of Northern voters would vote in favour of a united Ireland in a Border poll held any time in the next five or seven years.

Why then is the religious headcount in this year’s census significant?

For one thing, it will put to bed permanently the notion or ambition of a “protestant state for a protestant people”. Northern Ireland will be a numerically balanced society in terms of religious and political identity. The idea or fear of sectarian dominance may give way to an acceptance of diversity. The dynamic of power-sharing may begin to develop into real political partnership or partnerships.

The Good Friday Agreement sees the constitutional future of Northern Ireland in a binary way – union or unity. But that binary construct has never really allowed for the complexities of such a choice.

Already we have the Protocol on Ireland and Northern Ireland which give the North a unique status and set of opportunities in its economic relations with Ireland, Britain and Europe.

Add to that the complete ambiguity of the term “united Ireland” – a concept which spans the spectrum all the way from a confederal entity of the two jurisdictions sharing membership of the EU to the Provos’ idea of a unitary socialist state – and the issue to be decided in a border poll if one were held becomes quite problematical.

Enlightened unionist politicians talk about the need for their community to prepare for a Border poll – but no-one should be under any illusion that they mean anything other than preparing to defeat any proposal for a unitary state.

And although some people south of the border also speak of the need to prepare for such a poll, they would be very naive to think it would be preceded by some process or conference in which leaders of the North’s unionist community sat down to negotiate a constitution for a unitary Irish state. That will not happen.

Despite all the bluster, the Protocol on Ireland and Northern Ireland is not going away and will not be abrogated. It must bed down, as must the Good Friday Agreement. Both give the people of Northern Ireland huge social, political and economic opportunities to prosper and reconcile.

Constant agitation of the binary constitutional issue is futile - it only serves the short-term agendas of those who benefit from polarisation, instability, discord and mistrust, namely the DUP and Sinn Féin.

Back on earth, we face the looming reality that Northern Ireland may be months ahead of the Republic in vaccinating its people

Those of us, myself included, who aspire to building on this island the vision of Davis, a society based on non-sectarian, republican values, must concentrate on the imperative of grasping the opportunities offered by the Good Friday Agreement and the Protocol to deliver organic prosperity and partnership rather than have political war-drums beaten in the offices of the Union secretariat in Downing Street or the backrooms of the Felons Club in West Belfast.

Back on earth, we face the looming reality that Northern Ireland may be months ahead of the Republic in vaccinating its people. That scenario is replete with implications for public attitudes south of the border. Public patience with living in a state of suspended animation is fraying badly - it will snap if there is a chasm in the rate of reopening of society north and south.

Micheál Martin has done well facing up to the pied pipers of the border poll; he now has a real challenge to convince the people that the cabinet and the permanent government really understands that we really are in a full-scale emergency (as the E in Nphet suggests).