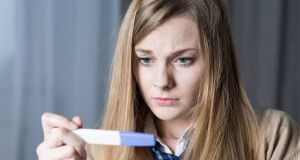 “My cautious assessment is that there is a strong majority now for abortion in circumstances of fatal foetal abnormality or where the pregnancy is as a result of rape or incest.” File photograph: iStockPhoto

How about Friday, February 23rd, 2018, for an abortion referendum? It’s not the most attractive invitation, I know, but it’s time now to set a date.

There is a tendency in this State to drift on the big political issues, especially when it comes to significant constitutional change. There are many good reasons why setting a finite time in which to resolve the current debate about the Eighth Amendment and abortion would be a good thing.

There is much work to be done on “the what” of the proposal to the people in that referendum. The Government can now, however, decide on “the when”. It should announce a date for when the referendum will be held.

Setting a date will of itself avoid this issue falling foul of the “poc fada politics” which currently prevails on many issues. It will avoid the matter being lobbed off again into the long grass.

It should also allow a period of calm reflection after the constitutional wordings and legislative offering are finalised and before the campaign proper begins.

The Oireachtas committee can sit in May to prepare its plan of work. It can hold formal proceedings or hearings in June and July. The committee can put time aside in September to finalise its recommendations.

The month of October could be utilised for the difficult task of drafting the final constitutional and legislative provisions. The Act to allow for a referendum could be debated and passed in the Dáil and Seanad in November.

Even allowing for some slippage, there could then be some calm over the Christmas period into mid-January. Then there would be a six-week campaign from then to the end of February.

We have tended in recent times to do referendums on a Friday, so February 23rd looks like the ideal date. If someone can point to a problem with that particular date then March 3rd could be a fall-back option.

Such a schedule means the referendum would be done within a year of the assembly’s decision and yet get the issue finalised one way or the other before Government goes on tour for St Patrick’s Day visits and politics takes a break over Easter which is at the very start of April next year.

Setting down a schedule would also enable the early establishment of the independent referendum commission. Its role as the independent body that explains the subject matter of referendum proposals, promotes public awareness of the referendum and encourages the electorate to vote will be particularly important around an issue as important and sensitive as abortion.

Indeed, one of the important lessons of the assembly process is how challenging and complex the issues are around this referendum and how important extensive and detailed consideration of the legal and medical context and reflection on the personal stories involved can be.

Interpreting polling data on an issue like abortion is fraught with difficulties. The precise wording of questions is particularly important. One thing is clear however. There has been a significant shift towards more liberal access to abortion among the electorate in the last decade or so.

My cautious assessment is that there is a strong majority now for abortion in circumstances of fatal foetal abnormality or where the pregnancy is as a result of rape or incest.There is also probably a clear majority for its availability where continuing the pregnancy could have a significant impact on the health of the mother.

While younger voters would be prepared to go further than that, most voters will need to be reassured that the constitutional and/or legal provisions do not lead to drift towards more liberal availability.

Referendums are different to general political debates because they are shaped by the binary choice put to voters. Referendum campaigns are often and easily diverted into extraneous issues. Determining the question to be put to voters will be an extraordinarily complex challenge in legal drafting and in political discourse.

It will be important to give ample space and time for such considered analysis. It will also be important to bring focus and order to the process. Setting an actual date for the referendum vote would be a good start.