Nigel Farage: Ireland has been crushed by iron fist of the EU 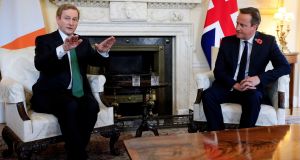 Ireland and Britain are tied together by reasons of family, history, free travel and trade. People are right to celebrate the improvement in our relations over recent decades and that new maturing relationship will continue to grow and endure.

Being a member of a political union such as the EU, is not necessary for good trading relations or international peace. Trade is done business to business, not government to government.

Businesses from China and Mexico, for instance, sell goods into the EU every day but both these countries are outside the EU. In a post- GATT, post-WTO world, tariffs on goods and services are quickly becoming a quaint relic of the protectionist past.

I want Britain to look beyond an ageing, economically-failing EU and look towards the opportunities of global trade and at the same time allow our people to decide the laws which govern our lives. In the EU, it’s a heretical doctrine called democracy.

The current Fine Gael Government are, of course, the same people who said ‘Vote Yes for Jobs’ during the Lisbon II debate and look how credible that turned out to be.

Taoiseach Enda Kenny’s assertion that the EU was responsible for the Peace Process was so counter-historical it was laughable. He knows, like everybody else, that the main players behind that process were the Irish, the British and the Americans. The EU had next to no part.

Ireland and the UK have had long relations well before we joined the EU; free travel and mutual use of each other’s welfare and health systems predates anything involving Brussels, and post a Brexit, there will be an unconquerable will to maintain free movement and trade with our Irish neighbours. Anybody who claims otherwise is lying.

At Maastricht, Ireland whose biggest trade partners are the UK and the US, joined the wrong currency, ie the euro and had inappropriate interest rates which overheated your economy. Passing the Nice Treaty meant since 2004, half a million people came to Ireland from eastern Europe.

Cheap money and cheap labour led to boom and eventual bust; then in 2012 over 152,000 people emigrated seeking work elsewhere. Many of those are your sons and daughters. And just when you were really down on your luck, the EU/ECB landed your taxpayers with an undeserved private bank bill of €70 billion. So far so bad, but the worst is still to come.

The EU currently plans to introduce a Common Consolidated Corporate Tax Base which will mean your corporate tax take will dramatically fall because a portion will have to go to the state where the goods are sold rather than where the companies are headquartered or employ people, ie Ireland.

When your corporate tax take falls, the Irish Department of Finance will have to choose to accept less tax take or to maintain the same level by increasing the corporate tax rate – and the multinationals will depart in droves.

At the height of the Euro banking crisis, the British government immediately offered Ireland a bilateral loan, showing goodwill. But it wasn’t only goodwill. It is in British interests when negotiating an exit from the EU to ensure that such a valued trading partner as Ireland is in a good position to thrive and prosper.

The transformative power of democracy in Ireland has been crushed by the iron fist of the EU – by the euro, the bank debt, the troika, and by Euro-slave Irish politicians.

National democracy and EU membership are incompatible. Brexit offers the British people a chance to reclaim our democratic freedom.

For that reason I ask Irish people who have a vote in the Brexit referendum to lend us your support.