President overreacted to prospect of government of quasi-anarchists, xenophobes and Eurosceptics 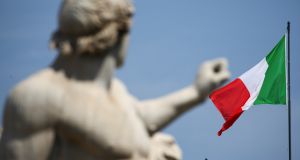 One does not have to be a supporter of the League and Five Star to argue that they were entitled to the chance to govern Italy. They have a majority in both houses of parliament. Photograph: Tony Gentile/Reuters

For the second time in a decade, Italy’s democratic institutions have failed their gravest test. Earlier this week, Sergio Mattarella, the country’s president, vetoed the appointment of the finance minister nominated by the two political parties that emerged with a combined majority in parliament after a general election in March.

The two parties – the left-populist Five Star Movement and the right-populist League – refused to propose an alternative, thereby ending their attempt to form a government. Mattarella then tapped Carlo Cottarelli, a former official at the International Monetary Fund, to form an unelected administration to steer Italy towards yet another election, perhaps as early as the summer. However, last night Mattarella gave both parties more time to reach a deal, prompting Cottarelli, to put his own plans on hold.

The episode has disturbing echoes of November 2011, when Silvio Berlusconi, a billionaire media tycoon-turned-prime minister, was pushed out of office after he lost the confidence of the Italian people, the financial markets and EU leaders.

Then, as now, elected representatives were swept aside as the then president picked Mario Monti, a former EU commissioner, to run a technocratic administration.

Now, as then, Italy is being menaced by nervous international investors. Now, as then, the country’s politicians have lost the confidence of the financial markets and of Italy’s establishment. Yet now, unlike then, it does not appear that the Italian people have lost confidence in the politicians they elected nearly three months ago.

We will never know whether the appointment of Paolo Savona, the 81-year-old proposed finance minister and arch critic of the euro, would have posed the threat to Italy’s membership of the euro zone that Mattarella and his advisers envisaged. It seems unlikely.

Savona would have met resistance from his fellow EU ministers and from formidable internal opponents such as the Bank of Italy. A Five Star-League government would have been unstable and destined to collapse before its term expired, like most Italian governments. And both factions had in any case tempered their hostility to the euro, at least for tactical reasons.

Mattarella has now provoked an Italian crisis that is more unpredictable than in 2011. This time, Italy is facing not just a financial but a democratic reckoning. By overreacting to the prospect of a government of quasi-anarchists, xenophobes and Eurosceptics, the pillars of Italy’s discredited state, of which the president is the epicentre, risk precipitating the confrontation they wish to avoid – between Italy and its membership of the euro zone, and perhaps of the union itself.

The euro debacle has tested the democratic integrity of the weakest euro zone member states to breaking point. In Ireland, Spain and Portugal – the other countries affected by the single currency’s woes – democracy not only survived the test but flourished after it.

Yet Greece and Italy, Europe’s oldest political civilisations, failed that test, under the pressure of market forces, the relentless logic of German economic orthodoxy, and internal weaknesses.

Greece is an extreme case. By 2010, when the euro crisis accelerated, its political class was discredited, its economy was exposed as a sham, and it could only be rescued with other people’s money on other people’s terms.

Italy has some of those characteristics. It has a chronically weak economy, and an enormous debt: €2.3 trillion, or 130 per cent of the value of its economy (Ireland’s debt is about 70 per cent of the economy).

It also has deep political fractures that have brought its current predicament to the surface. Italy is politically, economically and socially divided along north south lines, a split reflected in the election outcome.

The League, based in Milan and infused with nationalist-separatist xenophobia, captured the richer north. Five Star, which emerged in the past decade to channel the disillusions and cynicism of Italy’s young, took the poorer south.

These fractures are the legacy of the political system that governed Italy from the second World War until the end of the 1980s, and of the years of Berlusconi, who is the worst kind of cynical opportunist. It has now brought Italy to the brink of another failure of state as dangerous as the one that occurred during the confrontation with the Mafia in the early 1990s.

One does not have to be a supporter of the League and Five Star to argue that they were entitled to the chance to govern Italy. They have a majority in both houses of parliament. Their programme for government contained some radical economic ideas such as a universal basic income and the unwinding of pension reform, as well as controversial and probably unworkable policies such as the mass deportation of migrants.

These populist policies deserved to be tested in the real world, where they would almost certainly have been found wanting.

Instead, the next Italian election is destined to become, by default, a referendum on the country’s membership of the euro, with the League in particular pushing harder for an exit.

If that is how the campaign develops, it will be an attempt to answer a question that most Italians have not asked. There is little support in the country for withdrawal; most Italians regard membership of the EU and its projects as central to their future. They have every reason to be sceptical about the EU, but they are not Europhobes.

The euro crisis was always likely to have a second act, and the stage was always likely to be Italy. It is the euro zone’s third largest economy after Germany and France, and the only member yet to come to terms with the single currency. To do that, Italian democracy must be allowed to rise to the challenge.

Vincent Boland is a journalist and commentator

1 Sideline Cut: Vignette shows why Bird is the true shark in The Last Dance
2 We need to pay very close attention to what is happening in Britain now
3 Trump says, ‘I have the best words.’ Now this comedian’s going viral for lip-syncing them
4 Turbocharge your barbecue: Tips from the pros for cooking over flames
5 ‘I’m so lucky to be in the Caribbean – a million miles from Derry Girls’
Real news has value SUBSCRIBE