Vicky Conway: Empathy for Joanne Hayes has to prevent possibility of repeat 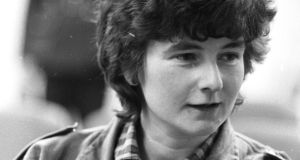 Joanne Hayes: We must direct our anger, shame and empathy for Joanne Hayes into atonement and action. Photograph: Peter Thursfield

On January 31st, 1984, Ann Lovett, at just 15 years of age, died in a grotto giving birth to her son. Less than 12 weeks later the body of a baby was found on a beach in Kerry. And Joanne Hayes had already given birth to her child on her family farm, a child who died during or immediately after birth. Of these three cases, one baby died as a result of the mother’s belief that she had to conceal her pregnancy. The second involved another young woman being castigated in a tribunal while still grieving the loss of her child, and the third was about another woman or girl whose child was killed who still does not feel she can come forward.

Mid-1980s Ireland. A time when contraception was difficult to access, abortion criminal and Magdalene Laundries still operating. Illegitimacy was still a legal and shameful term. It was a dark economic time when both the prospect of providing for a child or getting the boat must have seemed impossible for many. How many other women suffered silently?

Illegitimacy was still a legal and shameful term. It was a dark economic time when both the prospect of providing for a child or getting the boat must have seemed impossible for many

Two weeks ago, prompted by the Garda cold case review of the death of the baby on the beach, the Kerry babies case came hurtling back to prominence. It did so in a way which viscerally reminded many of the harrowing facts and taught a new generation, including our Taoiseach, about the scars of what this country has done to its women.

But this isn’t all in the past. It’s an issue we continue to grapple with in two distinct ways: how we resolve ongoing issues of women’s rights, such as repealing the Eighth and the #metoo campaign, but also how we make amends for the wrongs of the past.

Examples of the latter unfortunately abound, whether that’s the survivors of symphysiotomy, the residents of the Magdalene Laundries and other institutions, or women like Joanne Hayes. Our country has in recent times been made to confront these realities of our past but it hasn’t found a way to respond appropriately.

When we later acknowledge that wrongs were done, how should we seek to remedy that? How can the State convey its genuine shame for those actions, how can it best engage with the victims and how can it ensure that it has limited the chance of this happening again?

I suggest there are a number of actions that should now be taken in relation to the Kerry babies case to achieve this.

First, there should be a formal State apology read into the Dáil record. While the Taoiseach’s words were welcomed, a statement made during a press conference on another matter entirely cannot achieve the appropriate expression of shame and regret necessary in such circumstances. The issue merits the respect of the formal apology, the concentration of all our politicians’ minds collectively, and the indelibility of being placed on the Dáil record.

Second, the issue of compensation should be explored with Joanne Hayes and her family, via the appropriate channels. And this should be thought of in ways which are focused on Hayes. This may involve money, it may involve certain Government commitments, it may involve some commemorative action. It should be something which she wants and which seeks to remedy what she has experienced. It may be that nothing can do that and that should be her decision.

Third, the findings of the Lynch tribunal should be rejected by the Government. That tribunal report repeatedly castigated Joanne Hayes and her family, branding them liars, declaring that Hayes killed her own child when the medical evidence did not support such a statement. The procedure adopted by the tribunal was deeply flawed, undermining the findings further. Unlike the courts which are established by the Constitution, the tribunal was established by the government of the day and so it is open to the government to reject its findings. It should now do so and restore Joanne Hayes’s good name.

Fourth, we must do that which was not done at the time: understand what went wrong and identify what lessons still need to be learned, 34 years on, to minimise the risk of people being exposed to such treatment. Our system does not permit disciplinary investigation of Garda members who have retired, which may seem like the most obvious focus. However, there are other forward-looking points to focus on. We can ensure the best protection of the rights of detained persons, the highest standards in Garda crime investigation, enhanced training and oversight of the judiciary, and appropriate Garda discipline and accountability systems.

We must not let this be something we all got shocked and upset about for a week or two in early 2018. We must direct that anger, shame and empathy for Joanne Hayes into atonement and action. To be a mature democratic nation, we need to find considered ways to respond to injustices, ways that convey empathy and accountability.