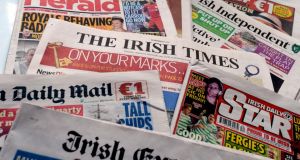 ‘Politicians have always been fearful of media owners – and with good reason.’ Photograph: Alan Betson / THE IRISH TIMES

The belated publication of draft guidelines on media mergers will not disturb the tranquil lives of those who control huge swathes of the Irish media and will not be enough to tackle the crisis within the industry.

Since Minister for Communications Alex White has no retrospective powers, media barons are unlikely to be put off their Christmas dinner by the prospect of new guidelines on future mergers.

The guidelines have been prepared under the Competition and Consumer Protection Act 2014 and interested parties have until January 22nd, 2015, to make submissions to the Department of Communications, Energy and Natural Resources.

Up to now responsibility for mergers has rested with the Department of Enterprise, Trade and Innovation.

The transfer of responsibility for approving mergers to the Minister for Communications has been accompanied by the introduction of new tests. The Competition and Consumer Protection Commission will still have a role in determining if a merger or acquisition can proceed, on competition grounds.

While the introduction of a “public value” test is welcome, the reality is that successive governments have failed to tackle the issue of concentration of media ownership for so long that any limited measures now will have little impact.

In 2011 Mr White’s predecessor Pat Rabbitte announced the transfer of responsibility for media policy at an NUJ conference in Croke Park. Since then there have been many false dawns.

Politicians have always been fearful of media owners – and with good reason.

In 1973 the National Union of Journalists made representations to then minister for industry and commerce Justin Keating seeking urgent government intervention to curb the growth of a dominant media monopoly in Ireland.

The union had staged a week-long sit-in seeking guarantees from the new proprietor Tony O’Reilly regarding the protection of journalists and journalism. While the strike was in many ways a success, the union recognised a need for formal State policy to prevent abuse of market dominance.

John Devine, leader of the strike and future NUJ president, placed high hopes in Keating, himself a former journalist, but the group industrial correspondent was to be disappointed, despite Keating’s radical reputation.

“Tony O’Reilly is a rich and powerful man,” Keating told Devine, dismissing the possibility that any government could prevent O’Reilly or anyone else, from securing so much control of the media that even governments would be afraid to challenge them.

The corpses of the Irish Press Group and the Sunday Tribune are testimony to the political cowardice which characterised media policy over the past four decades. The Competition Authority and the Broadcasting Authority of Ireland have respectively allowed the transfer of newspaper titles and radio stations in the face of clear evidence of a negative impact on media diversity and plurality.

The draft guidelines are useful as a slide rule. A stake of between 10 and 19 per cent may “constitute a significant interest” while a 20 per cent stake or higher “will generally constitute a significant interest”. The impact of general media “plurality” will also be considered in the future. Up to now the State has stood back as newspaper titles collapsed, jobs were lost and a small core of media groups hoovered up print and broadcasting companies.

Control of media organisations cannot be measured just by percentage share. The power to appoint editors, to determine the make-up of boards and to influence editorial and commercial structures and expenditure shape the end product and thus influence our democracy.

That’s why media matters. It is sometimes argued that, in the digital era, newspapers, radio and television are becoming irrelevant. But news and current affairs coverage influences how we receive information and more significantly, how news is mediated and interpreted.

Citizens have an interest in the media, which is why the NUJ has called for a public commission on the future of the media to examine not just ownership but editorial control, employment standards, measures to protect editorial independence, and whether State supports may be appropriate to ensure a diversity of media across all platforms.

Séamus Dooley is Irish secretary of the National Union of Journalists