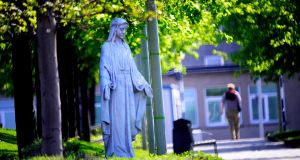 Ireland is in the throes of an overdue and much-needed wave of constitutional change. The cauldron of public discontent, long simmering with dissatisfaction and anger towards the religious establishment, is at last bubbling over. In two historic landslide referendums in as many years, the people have loudly signalled their intent to walk a progressive, modern and secular path.

While we are undoubtedly taking positive steps forward, disentangling the modern Irish State from its founding Catholic roots is a complex process. However satisfying hacking off the last clinging tendrils of the church might seem to some, the fact remains that many of our public institutions are funded and patronised by religious orders, including about 90 per cent of our schools and many of our health and social care services.

Dispossessing the church of these privileges and transferring them to secular government is not as simple as handing over the deeds. The money to fund these essential services has to come from somewhere, and the State, which foots the bill for most other things, has virtually none to spare. Practically speaking, there clearly must be some sort of compromise.

We must also be intellectually honest in our debate about the role of the church in Irish society. Religious orders have played a pivotal role in the development of healthcare in Ireland. Many of today’s leading hospitals were originally founded and largely run by the religious on a voluntary basis. This legacy should not be dismissed or devalued because religious observance has declined.

It is against this challenging backdrop that the future of the National Maternity Hospital has continuously occupied centre stage in public and political debate. The Holles Street move to the campus of St Vincent’s University Hospital, first planned a decade ago and approved in May 2013, came into sharp focus in the highly charged run-up to the campaign to repeal the Eighth Amendment, which was used by some to highlight the role of the church in limiting reproductive choice.

A fear remains, erroneously, that the maternity hospital’s ownership and governance model, and its perceived Catholic institutional ethos, will limit services that are necessary to facilitate public policy and individual reproductive choice. St Vincent’s was founded and owned by the Sisters of Charity. In 2002 it was transferred to a not-for-profit company, St Vincent’s Healthcare Group (SVHG), which is limited by guarantee and registered with both the Revenue Commissioners and the Charities Regulator.

While the Sisters originally retained the right to appoint the members of the SVHG board, there is no recent evidence of the imposition of Catholic morality on clinical practice in SVHG; indeed, they are understood to have now completely surrendered that right under both civil and canon law.

A written agreement brokered by labour relations arbiter Kieran Mulvey guarantees the existing ethos of Holles Street. Continuing to allege otherwise is either misguided or wilful deception. Still, some continue to demand that the Government buys the site for the new hospital, but the health service is so short of capital funding that paying for land that is available for free is nonsensical.

A written agreement guarantees the existing ethos of Holles Street. Continuing to allege otherwise is either misguided or wilful deception

With the argument around ownership now a non-starter, politics must be put aside and action taken. A critical project milestone is imminent. Two vital construction contracts await signature. If they are not signed this month, the project will be in deep trouble. New EU-wide regulations come in to force on January 1st, 2019. These contracts cannot be signed under the new rules. Both time and money are at stake. We cannot afford to waste either. The doomsday warning from the hospitals is not shroud-waving. It is justified and must be heard.

An apparent disengagement by the Department of Health from the joint project group, following Holles Street initiating an ultimately successful court challenge to a ministerial direction given to HIQA, has caused concern. Whatever the motivation, this is clearly a problem. It is hard to believe that any Minister or department would act vindictively, as some have suggested, but such a withdrawal is hard to understand and looks bad.

The Minister has now also said there should be a public interest member of the board. In recent years, the board of SVHG has been in difficulty over its approach to compliance with public pay policy and other non-clinical aspects of its relationship with the State. Against this backdrop, the idea of a public interest board member looks totally reasonable. Such a concept may even emerge as a general principle, for voluntary hospitals, from the work of the Independent Review Group. It may therefore be more prudent to wait for publication of its report, especially as there will be many further opportunities for the Minister to insert this requirement. A refusal by the hospitals would be difficult to sustain given the total dependence on the taxpayer.

The new National Maternity Hospital must be progressed – the existing hospital is unsustainable. Being patient-focused means setting aside bureaucratic and ideological considerations. Rather than sink into a quagmire of politicking and moralising, it is time to focus on simply getting the job done. If this cannot be done despite the clear evidence justifying the construction of a new maternity hospital, then we need to ask ourselves what our priorities are.