Government implies caring for children at home is undesirable 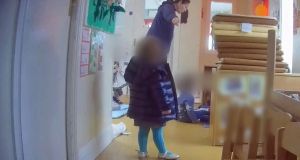 Three weeks ago, the RTÉ Investigates programme Behind Closed Doors was broadcast. In undercover footage taken in certain Dublin creches, serious safety breaches were brought to light as well as distressing evidence of children being mistreated. Similar issues had been highlighted six years ago in RTÉ’s Prime Time programme Breach of Trust.

Despite these findings, the governmental approach seems to be summed up in its commitment to its strategy First 5: support parents’ participation in the labour market, more subsidised family-friendly flexible working policies and more investment in early-learning care. Other than the first year of a child’s life, there is no mention of facilitating parents caring for their children at home.

But what about the wishes of parents and children? Like the education system generally, this one-size-fits-all approach does little to address the needs of individual children and their parents. We tend to be at our most vulnerable at the beginning and end of life, and if you are feeling weak or vulnerable, there’s no place like home.

Before anyone dismisses my opinion as being against childcare per se, let me assure you I am not. As with care for the elderly, I recognise that centre-based care is required in our society and is a necessity for some families. As a qualified Montessori teacher, I have seen – first hand – the dedication, genuine interest and care shown by those who devote their lives to educating and caring for young children. However, I also believe that there are those in what has become an overstretched “industry” whose work is seen as akin to unskilled labour, are treated as such and act accordingly.

Maria Montessori, from whom the Montessori approach takes its name, was a trailblazer of sorts. One of the first female medical doctors in Italy, she initially made a name for herself working with children suffering from brain injuries. Such was her achievement with these children that many succeeded in sitting and passing state exams. She then turned her attention to “normal” children in one of the poorest areas in Rome. A fundamental tenet of her early “children’s houses” was to try to recreate a home environment, for the particular benefit of those from disadvantaged homes. She taught her under-sixes not only reading, writing and maths, but also lessons in grace and courtesy and how to care for their environment and themselves.

Where is the evidence that a State-sponsored institution will be any better than private initiatives? And what about parents who wish to care for their children themselves?

While proponents of state-subsidised childcare almost always refer to the benefits of centre-based early education, the figures from the Growing Up in Ireland study suggest that small beneficial effects really only apply to those from disadvantaged backgrounds, and from non-English-speaking backgrounds (better vocabulary). However, the study also found a negative effect for children in centre-based care for more than 30 hours per week.

In 2016, Central Statistics Office figures indicated that 62 per cent of preschool children were cared for by a parent; 20 per cent by a family friend or relative; 13 per cent by a nanny and 19 per cent in a centre-based facility. (These figures add up to more than 100 per cent because some parents used more than one type of childcare.) Of those surveyed, only 18 per cent were unhappy with their present arrangement. The figures suggest that the majority of parents want to care for their children in the home setting. An ESRI analysis from earlier this year also indicates that most children in Ireland are cared for by their parents with no use of formal childcare.

Yet the Government’s approach is to subsidise creches. Where is the evidence that a State-sponsored institution will be any better than private initiatives? And what about parents who wish to care for their children themselves, or have a family member do so?

The Government’s subsidising only one form of childcare and penalising single-income families sends a message: caring for one’s own children at home is undesirable

Any attempt to help disadvantaged families who are struggling financially to cope with the cost of childcare is a good thing. But what about the low-income families who wish to care for their children at home? Just because someone is poor does not make them an unfit parent; nor does it mean that a creche would do a better job.

Each child is different and has different needs. There will be some that will do well in an early-years setting, but others will not. A Dutch meta-analysis from 2006 and an American study from 2010 found that cortisol levels (the stress hormone) in toddlers in particular rose dramatically during the day from morning to afternoon in centre-based childcare, compared with children cared for in the home.

For some children – such as those suffering separation anxiety – even a high-quality institutional care-setting may be unsuitable. The Government should support families who wish to choose another model of care for their children. Parents opting to stay at home are at a major disadvantage financially, despite the valuable role they play in their children’s lives, in the life of the wider family and indeed society. They are penalised by the tax system: a single-income household will pay more in tax than a double-income household with the same income. And they effectively subsidise other parents sending their children to centre-based care, while receiving no State aid for caring for their own children. The answer? Eliminate tax individualisation and allow a childcare subsidy to all parents to be spent as they see fit.

Current Democratic US presidential candidate Elizabeth Warren had an interesting take on this some years ago. In her 2003 book The Two-Income Trap she proposed that pressure on families to have two breadwinners leads to greater financial strain caused by an increase in the cost of living. In Ireland, the Government’s insistence on subsidising only one form of childcare and penalising single-income families sends out a clear message: caring for one’s own children at home is undesirable – even in the face of programmes such as Behind Closed Doors.