Vincent Woods: ‘Old and young miners were left with coal dust on the lung and under the skin, damaged hearing, damaged hips and damaged lives’ 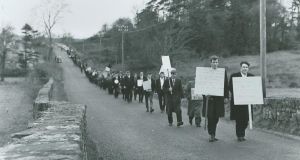 I’ll tell you what it is

History is the other man’s story

The man who owned the pit

Not the story of the likes of us

Who worked in it

I wrote that poem years after the Arigna coal mines closed in July 1990, not long after the Arigna Mining Experience interpretative centre opened to create a few sustainable jobs in the area and to show visitors what life was like for generations of coal miners on the Leitrim-Roscommon border.

The question of what constitutes history, and whose version we absorb and pass on, is one that I return to time and again: and it seems especially relevant in these years of historical commemoration.

Many people will know the story of Leitrim man James Gralton, the only Irish citizen deported from this country since independence, and the subject of Ken Loach’s strangely lacklustre film Jimmy’s Hall, but few will make a connection to a wider landscape of political agitation which links the marginalised miners of Arigna and Castlecomer, Co Kilkenny.

Jimmy Gralton was deported to New York in 1933 as an “undesirable alien”, after years of political campaigning for land rights, education and the free discussion of socialist and left wing ideas. He was denounced and vilified by local Catholic clergy and politicians from almost all the ascendant political parties of the post-civil war era. A handful of people and local folklore kept his memory alive and Pat Feeley’s fine radio documentary The Gralton Affair brought his story back to national attention; but for them James Gralton might well have vanished from official history. Launching Des Guckian’s book Deported in April 1986 John McGahern made several telling points about the relevance of Gralton’s story and its effective repression: he said those who had supported Gralton had “served human liberty”; and the fact that he had not heard of Jimmy Gralton until a short time before then demonstrated “the effectiveness of the conspiracy of silence and suppression around his name and life”.

A miners’ strike in Arigna in 1968/1969 foreshadowed some of the divisions and bitter legacies of the British miners’ strike of the mid-1980s, with those who returned to work branded as “scabs”, neighbours divided and a largely unfocused politics of opposition embedded in local consciousness. Photos show the striking miners on a protest walk from Arigna to Carrick-on-Shannon, some of them carrying placards with slogans that suggest a deeper political feeling than “mere” rebellion over pay and working conditions: “We want justice. We are not free in a so-called free country” and “We walk to work while our boss drives a Mercedes”.

The Deerpark mines at Castlecomer closed on January 31st, 1969, just after the long miners’ strike in Arigna. Over 200 men were given one week’s notice and no redundancy or compensation: from coal face to dole queue in the stroke of a pen. The common ground that some of the union men had forged between Arigna and Castlecomer could not withstand the force of ruthless economics.

There’s a CD of music and song inspired by the Arigna mines called Scars on the Mountain. In truth the scars were on the men, old and young miners left with coal dust on the lung and under the skin, damaged hearing, damaged hips and damaged lives. Anyone visiting the north west should visit the Arigna Mining Experience. The tour provides some small insight into what working life was like for the 250 men working there in the late 1960s and 1970s; it’s not the whole story, but it’s an important part of an underwritten history of working life in Ireland. Castlecomer has no such centre, but the story of the miners there deserves its rightful place in history. As we survey that scarred landscape in these years of memorialising we should never forget the men and women who worked, suffered and struggled for the most basic rights. They fought for a better life for all, and we should honour their legacy.

Writer and broadcaster Vincent Woods grew up close to the Arigna coal mines. His uncle, Michal Guihen, led the strike of 1968-1969. Email vwoods@eircom.net

Diarmaid Ferriter is on leave