This resignation and scandal is not a surprise. After all, we have a president who is too careless to handle a national security incident in a confidential manner

Donald Trump's national security adviser, Michael Flynn, resigns after coming under fire over whether he discussed the possibility of lifting US sanctions on Russia before Trump took office. Video: Reuters 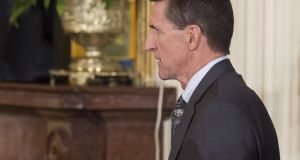 National Security Advisor Michael Flynn arrives for a press conference in the the White House on February 13, 2017. / AFP / SAUL LOEB

Cast your mind back to four months ago, when Donald Trump was just a long-shot candidate with a hot-headed adviser by the name of Michael Flynn.

It sounded ridiculous at the time. But after a month of this gonzo president, our memories are already fading. Propaganda will do that to you, as George Orwell warned us all in 1984. Sometimes two and two are four. Sometimes they are five.

Still, it’s true that the Trump campaign seized on the preposterous FBI investigation into Clinton’s emails to issue this press release: “Clinton’s Careless Use of a Secret Server Put National Security At Risk.”

Less than a week later, at their second presidential debate, Trump took the attack one step further, threatening to jail Clinton if he ever took power: “She didn’t know the word – the letter C on a document. Right? She didn’t even know what that word – what that letter meant.”

Let’s just pretend that Trump knew that C means Confidential, not Classified, as he was suggesting. Let’s even play along with the notion that Clinton’s server was a security risk to the country.

What do Michael Flynn and Mar-a-Lago mean for national security?

To the fee-paying members of Trump’s Florida club, it means greater access to watch the president and Japanese prime minister reacting to the news of a North Korean missile launch in real time: huddling over documents and making phone calls on cellphones in public.

Or as one guest, Richard DeAgazio, put it on Facebook: “HOLY MOLY!!! It was fascinating to watch the flurry of activity at dinner when the news came that North Korea had launched a missile in the direction of Japan. The Prime Minister Abe of Japan huddles with his staff and the President is on the phone with Washington DC…Wow…the center of the action!!!”

Never mind classified information. Here is a president who is so careless that he can’t handle a national security incident in a confidential manner.

This kind of spectacle does wonders for the fees at Mar-a-Lago, where initiation has just doubled from $100,000 to $200,000 since its owner became president. But it does little for the national security of the country or its allies.

In case you think this is just one small lapse over dinner, Mr DeAgazio also posted to Facebook photos of the military aide carrying the nuclear codes that are frighteningly close to Trump’s trigger-happy mouth.

Michael Flynn was so careless about his cellphone conversations, and so mistaken about his foreign policy priorities, that he called the Russian ambassador to the US before taking office.

Clearly clueless about how such conversations are transcribed by all parties, he talked about President Obama’s sanctions against Russia for interfering with the election that ended with Trump in the White House.

Then he denied talking about those sanctions at all, allegedly misleading the vice-president Mike Pence, who in turn misled the American people on national television about the same call.

Based on those reports that he misled the vice-president, Flynn could have been compromised by Russian blackmail. But then again, the Russians might already have enough ammunition against him if he accepted secret payments from the Kremlin when he traveled to Moscow in 2015.

Thank goodness for the independence and counter-intelligence activities of the justice department, who allegedly warned the White House that Flynn was a possible blackmail target several weeks ago.

Why didn’t Trump do to Flynn what he has done to so many reality TV contestants in his only real preparation for his current job? Why didn’t he just fire him instead of allowing him to quit?

After all, that is exactly what he did to the woman who warned him that Flynn was compromised. Acting attorney general Sally Yates was removed from her job for defending the Constitution by refusing to uphold the travel ban on seven Muslim-majority countries that remains blocked by several federal courts.

We can’t be sure what’s going on underneath Trump’s coiffured combover. Unless he’s watching cable news and simultaneously tweeting about his thoughts in real time.

Instead we have to rely on his public comments about Vladimir Putin’s Russia and his own United States. Comments like the ones he made barely a week ago, when Bill O’Reilly of Fox News dared to suggest that Putin was a killer. “We’ve got a lot of killers,” said Trump. “What, do you think our country’s so innocent?”

Trump is correct: his version of America is not so innocent. It’s the kind of place where a candidate can accuse his opponent of running a foundation that is “a criminal enterprise” for accepting money from foreign governments. Then, once that candidate becomes president, invite foreign governments to give his businesses money in Washington DC and Mar-a-Lago.

The only things protecting Trump from impeachment for his egregious behaviour are his poll numbers and the false sense of security they give to Republicans in Congress.

Sadly for Trump, those numbers are tumbling faster than the ratings of Celebrity Apprentice. In just three weeks, Trump has lost 5 points in his Gallup approval polls to hit 40%.

It took Richard Nixon four years to reach this low point, just a year before he quit the presidency. At this rate, Trump will reach Nixon’s all-time low of 24% approval before the end of April.

We have barely begun to scrape the surface of Trump’s fatal compromises with Russia. It was only last week that US officials say they corroborated some of the communications in the famous British dossier detailing those compromising situations.

Trump can pretend all he likes. He can bluster his way through TV interviews and at the presidential podium about everything from the tiny crowds at his inauguration to supposed illegal voting by non-citizens.

But sooner or later, the presidency – and the constitution it is supposed to defend – catches up with you. A commander-in-chief can’t compromise his own nation’s security and expect to keep his job.

Flynn’s short White House career may be over. But Trump’s nightmare-a-lago has only just begun.

Richard Wolffe is a Guardian US columnist, as well as chief digital and marketing officer at Global Citizen, a non-profit dedicated to ending extreme poverty.

1 Tyrone midwife on the cover of Vogue magazine
2 In six months we will be in the grip of a 1980s-style recession
3 Angela Merkel sweeps in to save the euro zone
4 Covid-19: Further easing of restrictions likely but little change to roadmap
5 Barack Obama urges those protesting in US to seize the momentum
Real news has value SUBSCRIBE