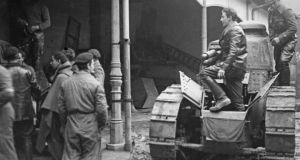 Fighting fascism on Twitter is not what the International Brigades foresaw when they marched to Spain in the 1930s. Photograph: Keystone/Hulton Archive/Getty Images

“If you’re on the right, you’re evil, you’re racist, you’re stupid – you are a basket of deplorables. How do you think people are going to vote if you talk to them like that? When has anyone being persuaded by being insulted?

“It’s time to stop ignoring your opponents or worse, trying to silence them. It’s time to stop banning people from speaking in universities . . . engage in the debate; talk to people who think differently to you and convince them of your argument . . . being offended doesn’t work any more; throwing insults doesn’t work any more. The only thing that works is bothering, and doing something.

“The left have decided that any other opinion, any other way of looking at the world is unacceptable; there is no debate any more . . . stop thinking that everyone who disagrees with you is racist and sexist and stupid and talk to them. Persuade them. Because if you don’t, you going to get another four years of Trump.”

There have been sporadic pointy-headed academic arguments about the regressive left (aka the ctrl-left) over the past while. But it took the above viral rant by the comedy left-wing news reporter Jonathan Pie (as played by the actor Tom Walker) to crystallise the malaise.

The regressive left are seen as ideologically haughty and monochromatic. In favour of censorship and shutting down free speech, condoning the use of violence as a protest option and – by emphasising melanin and chromosomes – favouring group identity over individual rights. Seen as infantile and authoritarian, the term “Nazi” is yelped at anyone who disagrees with them.

The most prominent kicking the regressive left have received to date was from a critical Barack Obama in his last interview before leaving office. “There’s something wrong with the core argument,” said Obama, who bemoaned the fact that all his work on “strengthening the minimum wage and promoting collective bargaining/overtime rules” was lost “amid the controversy around transgender bathrooms”.

He added that “my advice is: don’t go around looking for insults – if somebody says something you don’t agree with, engage them on their ideas”.

But with universities turning into ideological creches, with terms and conditions now being affixed to the principle of free speech the regressive left are also the illiberal left. Worse, they’ve taken their eye off their ball.

As Obama pointed out, traditional left concerns about trade union rights (jobs, pay, pension etc) have been replaced by a ctrl-left running around university campuses in masks screaming “Nazis!” and having an unhealthy fixation with idiot, careerist provocateurs such as Milo Yiannopoulos and Richard Spencer.

With living standards falling, plutocracies flourishing and sinister nationalism on the rise, a preposterous regressive left are behaving as digital pharisees, pruriently scanning for thoughtcrimes and getting up on their crucifixes online while in the real world social democratic principles are left to wither.

Fighting fascism on Twitter from the comfort of your own living room in between bites of Domino’s pizza is probably not what the International Brigades foresaw when they marched to Spain in the 1930s to participate in hand-to-hand combat with Franco’s Falangists in the alleyways off Las Ramblas.

The term regressive left/ctrl-left was originally coined by the British ex-Islamist Maajid Nawaz to describe “well-meaning liberals and ideologically driven leftists who naively and ignorantly pander to Islamists”; it was further refined by author Sam Harris to refer to a left who “ continue to imagine that Muslim terrorism springs from economic despair, lack of education and American militarism”.

But the regressive/ctrl-left is now defined by an an a la carte approach to freedom of expression. A belief in free speech can be a very tough ask sometimes but it cannot be negotiable.

Classic 1930s fascist tactics – wrecking meetings, attacking and harassing opponents – are now being used by those purporting to be anti-fascist.

The ugly slurs used by those within the regressive left to describe political opponents – “porch monkey”, “house Negro” – come straight from the alt-right handbook.

The term Nazi is in now danger of being stripped of its horrific meaning. The Nazis burnt children alive in ovens – not Jewish children, or gay children or gypsy children – just children. Using the term to describe those who don’t agree with you is a sickening perversion of its historical significance.

That great idea of human universality – Martin Luther King’s dream that we would evolve to be only judged by the content of our character has been derailed by screeches of self-righteous cant from look-at-me-I’m-so-virtuous political poseurs.

There are gradations of belief and complexities of thought within every belief system. Whenever a consensus is forming (about anything) it is incumbent on someone to stand back and say “Wait a minute” – something the binary system of the regressive left doesn’t allow for.

Obama hinted that it was the regressive left who won it for Trump, others have been less circumspect: it was the illiberal left’s blaming and shaming; the labelling of voters as poorly educated, selfish and bad people that delivered Brexit/Trump. And this condescension from a political cohort who sanctify egalitarianism.

Those women who were finger-waggingly lectured that the reason they voted for Trump was because they were suffering from “internalised misogyny” have probably – on the back of their diagnosis – already resolved to vote for him again in 2020.

From within the privacy of the polling booth, where nobody could see and nobody could hear, voters gave a two-fingered riposte to the hectoring of their “betters”.

And it will happen again because you can’t No Platform universal suffrage.