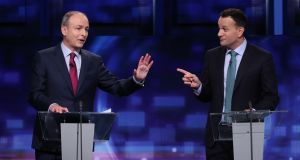 Micheál Martin and Leo Varadkar: Fianna Fáil and Fine Gael have agreed an overall framework within which a programme for government might be negotiated, according to the FF leader. Photograph: AFP via Getty Images

Today in the Dáil the priority, quite correctly, will be on discussing the next steps in the pandemic response. There is an urgent need for greater clarity on a range of issues.

While the spread of the virus in the wider community has clearly been controlled, critical concerns such as the situation in nursing homes as well as testing and tracing capabilities are fundamental to being able to decide when and how Ireland will follow other countries in lifting restrictions.

And we also have to act with proper urgency in addressing the need for a fully functioning government, subject to parliamentary oversight and capable of leading the recovery effort.

We have to move on to substantive discussions on a detailed programme for government and restoring normal accountability for official actions.

Most of all, a comprehensive recovery will not happen by itself, it must be planned and shaped by a government that can pass measures which are not solely emergency actions supported by all.

In response to the reality of the diverse multi-party and non-party Dáil returned by the people, there have been extensive discussions during the past two months.

In order to provide clarity and look for progress, Fianna Fáil and Fine Gael have worked to unblock the process by agreeing an overall framework within which a programme for government might be negotiated.

When you combine the framework document with the lengthy response to specific queries of the Green Party, the parties have provided more detail than has ever been provided before the commencement of negotiations on a programme for government.

Within sustainable economic and fiscal boundaries, substantial action on core priorities has been agreed.

In relation to housing, a new approach to significantly expanding social and affordable housing, tackling homelessness and helping people who rent are agreed priorities.

A radical change to the public health system to deliver fairness and improve services as well as a new approach to mental health are included in the framework.

So too are priorities in relation to education, community development and social supports.

There has been a lot of commentary specifically about what action a new government should and can take on the climate emergency.

In our discussions with the other parties and independents, we have been clear from the very beginning that a new government must set more ambitious targets and agree actions to meet these targets.

That’s why we argued during the election that new climate legislation should reflect this commitment and be introduced within 100 days.

A decade ago, we supported strong climate legislation. Equally, we not only supported the introduction of a new carbon levy in theory, we helped vote it into law. We did so while securing ringfenced funding for just transition supports.

We are also determined to stop the growing idea that this should be seen as an “urban versus rural” issue. The climate change agenda will not be credible unless we show how to strengthen and make sustainable parts of our economy and society which are, today, scared of the potential impact of climate policies on their interests.

On climate change and biodiversity, we have shown our good faith and are determined that the new government will step-change action.

We want to tease out through talks the specific actions that would be taken to achieve at least an average 7 per cent a year reduction in carbon emissions. We want the new government to be formed based on an honest programme of what this involves – the actions, the impacts and the costs. These need to be detailed and agreed in discussions by all who will participate in the government.

The National Economic and Social Council (NESC) very recently looked at the issue of how to address both climate change and make sure that people and communities don’t get left behind. With all social partners involved, the report says that even with the approach it recommends being implemented, we should expect the transition “to be complex and messy, and to take time”.

In the spirit of responding to this, I believe we must not only increase our short and medium-term targets, we have to move from the general to specifics on how those targets will be met. This is not an option for a new government; it is essential.

This is a process which is not easy for any party. We have our own distinct mandates and party traditions. Within each of our parties, intense discussions are ongoing.

Since the general election, more than 1,000 people have lost their lives and more than one million people are on income supports from the State.

What is clear is that the public is looking to us to provide clarity on forming a new government which can help us recover from this unprecedented emergency and show leadership in the coming years.

I and my party will continue to be constructive and show urgency in trying to move from a framework for a new government towards a more detailed programme for such a government.