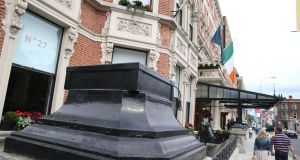 An empty plinth: “Now that it has been conclusively established that the statues are not slave-related at all, it seems only right that the ‘Shelbourne Four’ should be liberated from storage and allowed to resume their pedestals without wasting the courts’ time.” File photograph: Stephen Collins/Collins Photos

It might be tempting to regard the removal of the four statues from the front of the Shelbourne Hotel in Dublin city as a silly season story of little consequence. But there are important issues at play here.

Let’s get one thing straight at the start. The statues do not depict slavery in any way. The figures are not manacled. They are not even servants. They are clothed in flowing gowns. They were commissioned in the mid-19th century from a catalogue of statuary published by a French bronze foundry which reproduced the sculpture of Mathirin Moreau. Kyle Leyden, an art historian, has traced their origins and the evidence is clear – there is no hint of slavery.

1 Dr Tony Holohan expected to return to his post next week
2 How one couple’s weekend away resulted in 30 Covid-19 cases
3 Woulfe resignation would be unjust and disproportionate, Denham report concludes
4 Will your boss let you work long-term from home – or from abroad?
5 Nphet meets but no change to current alert levels expected this week
6 Why Chrissy Teigen is right about sharing ‘deep pain’ of pregnancy loss with millions of followers
7 Two Portobello homes get the designer treatment
8 Gardaí seize €4 million in cash from organised crime group
9 Pharmacist suspended from practising over risk to public health and safety
10 Former RTÉ producer Kieran Creaven charged with 17 child abuse offences
11 Taoiseach tells TD to ‘cop on’ over criticism of contact tracers asking about pubs
12 House asking prices rebound but will likely fall again - MyHome
13 EU formally warns UK of legal action over Brexit deal ‘good faith’ breaches
14 Covid-19: College students on a break and middle-aged people in rural pub linked to large clusters
15 Netflix: 10 of the best new shows and films to watch in October
16 Plans for €2bn Dart expansion lure Bombardier to Dublin
17 The Comey Rule review: You actually begin to root for Trump
18 AA Ireland bought by Olivier Sarkozy-led fund
19 Multi-million Anglo write-offs may be impossible to investigate, commission says
20 Oisin Murphy denies taking cocaine after failed drugs test in France
21 Council set to abandon €20m Liffey bridge plans
22 Don’t use Google, don’t use work email, don’t hit ‘accept all’: how to fight for your privacy
23 Coronavirus: Derry and Strabane set for further restrictions
24 Racing 92 players test positive for Covid-19 two weeks before Champions Cup final
25 Indecisiveness led to home of The O’Rahilly being demolished
26 City firms move £1.2tn and 7,500 jobs out of London - EY
27 Virgin Media unveils new entertainment platform
28 Dave Hannigan: How Christy Ring arose the curiosity of American media
29 Google tells workers to return to country where they are employed
30 Bloody Sunday decision on soldiers shows limits of ‘truth or justice’ model
31 Finn McRedmond: Trump v Biden charade still had some value
32 Winding up order for St Mary’s care facility in Dublin 4 confirmed
33 ‘You feel like you’re trapped in this Leaving Cert. It just keeps going on and on’
34 Johnny Sexton captains Leinster against the Dragons
35 Subway bread too sweet for the Irish tax authorities
36 Fair Deal nursing home scheme and the family home: how does it work?
37 Construction sector 'unlikely to recover' before 2023
38 The far right rises: Its growth as a political force in Ireland
39 How to deal with anxiety from Covid and other events that are outside our control
40 Everton striker Dominic Calvert-Lewin among new names in England squad
Real news has value SUBSCRIBE