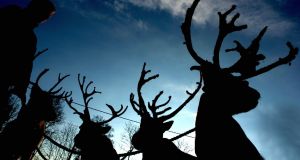 That now-famous Christmas song Rudolph the Red-Nosed Reindeer was first heard on the airwaves almost 50 years ago, but the link between reindeer and Christmas was established long before that. There are references in Renaissance English texts to people wearing reindeer antlers during Christmas dances.

Rudolph himself came into existence in a comic booklet written by Robert May in 1939, which was given out to children in the Montgomery Ward department stores in the United States. May’s brother-in-law, Robert Marks, used the theme for the popular song he wrote about Rudolph in 1949; Gene Autry, who was known as “the Singing Cowboy”, first performed the song.

But why was Rudolph’s nose red, so shiny red that he could guide Santa’s sleigh through the darkness? One common view was that the poor reindeer had a cold. Another view was not so kind to Rudolph’s reputation; this held that while Santa Claus ate the biscuits and drank the milk that people had left out for him, Rudolph helped himself to the glasses of whiskey. (What about the carrots?)

Perhaps the song lends some support to this latter view because one could perceive a link between the unexpected triumph of Rudolph (who liked a drink or three) over his more straitlaced companions and the way that people relax socially that bit more over the festive season.

However, scientific research carried out in Norway gives us another explanation (it seems that science can explain everything, whether we want it to or not).

This and other scientific explanatory theories relating to Christmas may be found in Roger Highfield’s fascinating book, The Physics of Christmas, published in 1999.

It seems – and this is unfortunate for poor Rudolph – that reindeers’ noses provide a hospitable environment for parasites.

In this way, the amount of heat and moisture that they lose is lessened.

Some years ago, Odd Halvorsen, a scientist at the University of Oslo, suggested that maybe the reason Rudolph’s nose was red was that he had a respiratory parasitic infection.

It seems that reindeer are prey to 20 or more parasites specific to them as well as being infected by parasites common to other ruminants as well.

Santa and his sacks of presents are heavy enough, no doubt, but when one considers all those parasites, no wonder poor Rudolph’s nose is red.

It’s difficult to explain why such an extensive link between reindeers and the culture of Christmas has developed, and a short piece such as this can hardly hope to explore it fully, but there is more bad news as regards the accuracy of the song. Biologist Caroline Pond of the Open University, another scientist who has studied reindeer, says that they are not depicted at all accurately in the Christmas festivities.

Take, for example, the way they are usually represented on Christmas cards. Reindeer are the only deer species where both sexes have antlers but the males lose their antlers around the time of year that Christmas is celebrated.

The reason has to do with mating, and we won’t go into any further explanation than that except to say that after all the fighting and locking of antlers in the combat over choice of mates, the males are exhausted by loss of body weight and fat reserves. Perhaps the inaccurate depictions of Rudolph with antlers seek to turn a blind eye to this seamier side of reindeer life.

The reindeer Lapps or Sami, who live in northern parts of Norway, Sweden, Finland and Russia, for the most part use castrated reindeer to pull loads. Castrated reindeer keep their antlers longer than their functioning counterparts, so that if Rudolph were to retain his antlers on Christmas cards, he’d have to be shorn of his manhood, so to speak.

The more we learn about reindeer, the worse it gets for Christmas-card designers. While the males dissipate their energy on sex and violence, the females amass fat.

By the time Christmas comes round, it is only the female reindeer that would have the antlers and the strength and energy to pull a sleigh loaded with presents all over the world.