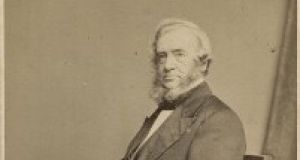 Patrick MacDowell: he devoted himself mainly to sculpting portrait busts and what art historians refer to as “ideal subjects”

Ireland has produced some notable sculptors, one of the finest of whom was Patrick MacDowell, who died 150 years ago on December 9th. Although he worked and exhibited mostly in London, he also exhibited at the Royal Hibernian Academy in Dublin between 1843 and 1847.

He was born in Belfast in August 1799, and was an only child. His tradesman father died at a young age, leaving his widow and child in difficult circumstance financially. At the age of eight, he attended a boarding school in Church Lane in Belfast run by an engraver called Hugh Gordon and it was here his interest in art was kindled as he copied some of Gordon’s collection of prints after school.

In 1811, he and his mother moved from Belfast to Hampshire in England where she had relatives and he received some further schooling from a clergyman. Although his preference would have been for art, it was decided a career in trade would be a safer bet and he was apprenticed in 1813 to a coachmaker in London. The apprenticeship turned out not to be such a safe bet as the coachmaker’s business failed four years after MacDowell had enrolled with him.

Fortunately for him, by this time he was lodging with a French sculptor, Pierre Francois Chenu, who recognised his talent; under Chenu’s tutelage, he began to sketch from casts and do drawing and modelling. He proved a diligent student and his first attempt at a complete work, a small figure titled Venus Holding a Mirror (based on Donatello) so impressed Chenu that he purchased it.

Having a bust accepted by the Royal Academy in 1822 was a major boost. He now devoted himself mainly to sculpting portrait busts and what art historians refer to as “ideal subjects”. His first attempt at the latter, Love of Angels(1827), was inspired by a Thomas Moore poem of the same title and was sold successfully and by now he was attracting important patrons. For Edward Cooper of Markree Castle, Co Sligo, who was MP for Sligo, he created the work Cephalus and Procris.

On the advice of the well-known painter John Constable he entered the Royal Academy (RA) schools in 1830, where he made rapid progress and enhanced his reputation.

Sir JE Tennent, MP for Belfast, became a valuable patron. One of his works for Tennent, a contemplative piece called Girl Reading, was completed in 1837 and is now in the National Gallery of Ireland. It was exhibited in the RA in London in 1838 and received much attention and praise. It is particularly noteworthy for the girl’s gentle expression and the delicate finish of the drapery.

Tennent introduced him to TW Beaumont, MP for Northumberland, who became his main patron and for whom he executed a number of busts and ideal subjects, including Girl Going to Bathe (1841) and Early Sorrow (1847).

He was elected an associate member of the RA in 1841 and Beaumont funded him to study in Italy for eight months. He became a full member of the RA in 1846. Two works that brought him to greater public attention were Girl at Prayer (1844), exhibited at Westminster Hall, and Early Summer, shown at the Great Exhibition of 1851.

Rebecca Minch, who wrote the MacDowell entry in the Dictionary of Irish Biography (DIB), considers his memorial to Frederick Richard Chichester, Earl of Belfast (1853), to be his masterpiece; “with its classical forms and carefully rendered details, it occupies a significant place in the history of Victorian sculpture”. Among other notable works she mentions are the statues of Lord Exmouth (1846) and busts of William Pitt and the Earl of Chatham (both 1857).

Works of his that were once on display in Ireland are the Viscount Fitzgibbon memorial (1858), which was on Sarsfield Bridge, Limerick, until blown up by the IRA in 1930, and the Earl of Eglinton and Wilton statue (1866), which was in St Stephen’s Green until 1958, also destroyed.

His most well-known work would be the group known as Europe, executed for the Albert Memorial, Kensington Gardens, London (1868-76). It was his last major work.

He was “known for his unassuming, gentle manner and the diligence with which he carried out his work”, remarked Rebecca Minch. “His works are graceful and elegant in design and masterful in execution,” according to RE Graves, who wrote the entry on him in the Dictionary of National Biography (volume 35, 1893). In his Dictionary of Irish Artists (1913), Walter Strickland agreed about the gracefulness and elegance of the works, adding that they rank among the best of his time in England, but “in common with the sculpture of the period, are conventional in modelling and lack vitality, imitations of the classic style based on that of Canova”.