‘Make sure that you don’t touch up the painting on the stool!’ 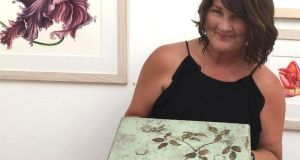 Mary Dillon with the stool painted by Charlotte Wheeler Cuffe, and her own work in the background

As a botanical artist, I’m honoured to have my work exhibited alongside that of many of my heroes in the National Gallery’s Drawn from Nature – Irish Botanical Art exhibition.

But when it comes to heroes, by far the most special to me is the wonderfully named Charlotte Isabelle Wheeler Cuffe.

She was a renowned botanical artist but for me there’s a personal element as well.

Many years ago, my father, Dan, showed me a very special gift he had received from Charlotte’s family in Leyrath estate, just outside Kilkenny. It was a small stool, hand-painted by Lady Charlotte Wheeler Cuffe with an image of a bramble and signed by her in 1888 at the age of 21.

I still recall the words of caution from my Dad at the time, “Mary, make sure that you don’t touch up the painting on the stool!” I assured him that I would resist the temptation to fill in those few gaps where the paint was beginning to show its age.

The stool was treasured by Dad and spent many years covered by a blanket and kept safely under the stairs. From time to time on a visit home, I would ask for it to be taken out to be admired by all.

At that stage, I knew nothing of Charlotte Wheeler Cuffe’s remarkable contribution to the story of Irish botanical art. But in the intervening years, I’ve made up for that.

Charlotte Wheeler Cuffe, affectionately known throughout her life as “Shadow” was born, Charlotte Isabel Williams, in Wimbledon, South London on May 4th, 1867. Charlotte was a grand-daughter of Rev Hercules Langrishe, 3rd Baronet of Knocktopher, Co. Kilkenny, and on June 3rd 1897 she married Otway Wheeler Cuffe, a civil engineer who was a nephew and heir to another Kilkenny baronetcy, Leyrath Estate.

Two weeks later, Charlotte and Otway travelled to Burma where Otway was to take up a position with the Indian public works department.

Charlotte and Otway were to spend 25 years in Burma and Charlotte’s collection of delicate, detailed paintings tell the story of her fascination with the plants and landscape of this magical country.

Charlotte frequently accompanied Otway on his travels around Burma, according to family lore to make sure “he got his figures right!”

On May 2nd 1915, Charlotte, a regular correspondent to friends and family back home, described one of these trips.

“We left Myithyina after dinner on Wednesday 28th and paddled down the river by moonlight in a dugout and rode out at dawn next morning ten and half miles due east to Wagaung.”

Charlotte used these opportunities to explore the locality, collecting and painting native plants. She learned Burmese and Hindustani and used only the local names for the flora she gathered on her explorations.

In another missive home, she spoke of her joy at finding a particular specimen.

“I found a delicious little white orchid this morning that I have not found before. Such a lovely dainty little thing – I must paint it before it fades.”

Charlotte lived to be just two months short of her 100th birthday. She died on March 8th, 1967. She generously gave her extensive archive of letters, sketch books and paintings to the library of the National Botanic Gardens, Glasnevin where she requested they would remain after her death.

The stool has long since been passed on to me and sometimes I find myself glancing over at it as I paint the plants I love in my studio. I think of that young woman of 21 years who went on to paint and catalogue the many exotic plants and flowers she discovered on the mountains and in the valleys along the road to Mandalay.

At that time, she knew nothing of the life that lay ahead of her. She only knew that she loved plants and loved to paint them.

Drawn from Nature – Irish Botanical Art exhibition, curated by Janet McLean of the NGI and historian, Patricia Butler, runs in the National Gallery until August 30th.