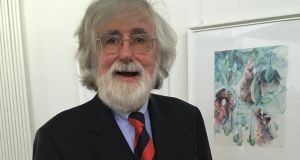 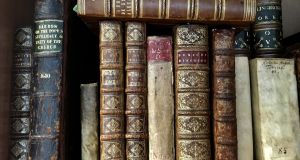 I’d always heard that Münster was a very Catholic town, so it was no surprise on my arrival to see the locals walking on water.

This Westphalian city has long been a place of pilgrimage, and not just for its beautiful churches and cathedrals. Every 10 years since 1977, contemporary art lovers come here for one of Europe’s leading sculpture shows.

She attracted huge crowds at the weekend to Münster’s inland harbour where she has installed a metal jetty just beneath the surface of the water, transforming a natural border into a bridge.

For history lovers, Münster is synonymous with the treaties signed here in 1648 that helped end the Thirty Years’ War, a complicated series of conflicts that devastated central Europe.

The Westphalian peace deal – ending war for the first time with diplomacy, not capitulation on the battlefield – adopted key concepts of international law, in particular national sovereignty, as well as laid a foundation stone for current European unification. (So crucial was the Westphalian Peace accord of 1648 that Irish historian Brendan Simms and others now cite it as a blueprint for ending the Middle East conflict.)

But Münster’s greatest treasure for Irish visitors lies hidden on the top floor of a building on the Johannisstrasse: the Ehrenpreis Centre for Swift Studies.

To honour the Dublin-born writer’s 350th birthday, scholars from Belfast to Bayreuth came here to present papers at the seventh Jonathan Swift symposium in Münster. That many had come directly from Dublin, and its own Swift 350 symposium, spoke volumes about the Swift world’s respect and affection for Prof Hermann Real, head of the Ehrenpreis Centre.

Over four decades he has worked assiduously to build up the holdings and reputation of the centre, co-conceived by and named after Irvin Ehrenpreis. A New York-born Swift scholar and biographer, Prof Ehrenpreis died suddenly while a visiting academic in Münster in 1985.

His family donated his library and papers to the centre bearing his name, where the dean himself would feel right at home. Key to this is Prof Real’s most staggering achievement: buying hundreds of antique volumes to reconstruct Swift library with identical imprints to those owned by the dean. Now 90 per cent complete, the Ehrenpreis collection contains 9,000 volumes: historical books and pamphlets, including two dozen pamphlets penned anonymously by Swift himself. Rounding out the collection is a broad selection of secondary literature and key editions of Swift’s own works. One of the most recent acquisitions: the first German language edition of Gulliver’s Travels from 1727.

In this optimised era of digital catalogues and digitised books, there is a real kick in perusing shelves of leather-bound volumes in the hope of getting a sense of what made Swift tick. From Essais de Montaigne, to Barrow on the Pope’s Supremacy and Unity of the Church from 1680, these volumes have been purchased with donations, testimony to Prof Real’s iron inventiveness and twinkling charm.

As well as the library, the centre publishes a Swift journal: its latest edition highlights obscure translations of Gulliver’s Travels, including a rare 1936 Mongolian version. It also flags the ongoing Swift fascination in pop culture: a Magdeburg cafe that bombards customers with the dean’s eulogies on coffee; a Prague reading room whose architects were reportedly inspired by Gulliver.

On his 350th birthday, Swift’s most popular figure continues to live on around Europe: academics in Münster were treated to excerpts from a new children’s opera based on Gulliver’s Travels, with music by Austrian composer Gerald Resch, that premiered in Dortmund last month. Other stage versions have gone on in the last months in Switzerland and Romania, as well as an intriguing robot version in the Netherlands.

Launching the three-day conference Irish ambassador Michael Collins praised Prof Real and the Ehrenpreis Centre as an “almost unparalleled special place of rare distinction”, and thanked the Westfälische Wilhelms-Universität of Münster for its “far-sighted decision” to guarantee the centre’s continued existence beyond its founder’s retirement.

For its part the university praised Swift as “one of the first European thinkers” and a cornerstone of its commitment to sustaining European “cultural heritage, literature and philosophy”.

As Jonathan Swift’s 350th birthday approaches in November, Prof Real hopes people in Ireland look beyond Gulliver to his other writings, in particular his beautiful poetry such as his personal favourite, “A Beautiful Young Nymph Going to Bed”. In it, Swift tells of “Corinna, pride of Drury Lane, for whom no shepherd sighs in vain . . . ”, her prostitute’s body wrecked by disease, her heart aching “with pains of love tormented lies”.