Flawed judicial appointments system has had its day 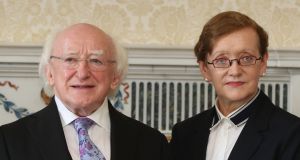 Former Attorney General Máire Whelan after her appointment as a judge of the Court of Appeal by President Michael D Higgins at Áras an Uachtaráin in Dublin on Monday. Photograph: Niall Carson/PA Wire

In normal circumstances, it takes a few weeks for a judicial nominee to be formally appointed at Áras an Uachtaráin. But the wheels of Government bureaucracy can move remarkably quickly when it’s a political necessity, and so the appointment of former attorney general Máire Whelan as a judge of the Court of Appeal was completed yesterday, less than a week after the Cabinet selected her. Taoiseach Leo Varadkar hopes he has drawn a line under a controversy that has dominated his first days in office.

Nobody comes out of this well. Not Fine Gael, not Fianna Fáil, not the Independent ministers. A Fine Gael-led Government uses the final Cabinet meeting before a change of taoiseach to push through the nomination of its attorney general as a senior judge. The Independents agree to the selection then protest against their own decision two days later. And Fianna Fáil whips itself into a state of indignation on the basis that it doesn’t like the system of judicial appointments the party itself designed and used in the same way in office.

The Government is correct in saying it broke no law or rules in selecting Whelan as it did. It’s also true that Whelan is an experienced and qualified candidate who has managed one of the most sensitive legal offices in the State at a time of crisis. The argument that only ex-trial judges should sit on appellate courts is questionable, while the anonymous briefing against Whelan from sections of the law library is best disregarded.

But Whelan was unwise not to apply for a judicial post through the Judicial Appointments Advisory Board (JAAB). Then taoiseach Enda Kenny and outgoing minister for justice Frances Fitzgerald should have advised her to do so. Moreover, it was wrong for Whelan to be at Cabinet for the discussion, however perfunctory, of her nomination. She should have left or been told to leave.

The bigger problem, however, is the system itself. Much of what has dismayed onlookers about the Whelan appointment has been standard cross-party practice for decades. For example, the convention has long been to present Cabinet with the name of a single proposed judicial nominee, not the name of everyone who applied. Many governments, including the last Fianna Fáil-led one, nominated non-judges to the superior courts without them having applied. In the lower courts in particular, political patronage plays a huge role in appointments.

The Government’s plan to reform the system focusses on JAAB and its obvious flaws. But just as with the law that gave birth to JAAB in the aftermath of the Whelehan affair in the mid-1990s, a major reform to judicial selection has been drafted not after rigorous analysis but purely to solve a political problem: to keep Shane Ross in Government. It seems grimly appropriate that that Bill will now be rushed into law largely to kill yet another political controversy.