It is vital that social media companies, the Garda Síochána understand and combat these new types of cybercrime 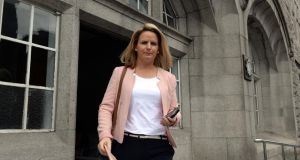 In recent months, comments I received via email and on social- media platforms I use have forced me to question how or indeed whether I would continue to use my online space. Do I really need to look at my pages first thing in the morning to see someone has written: “I’ll murder you with a hatchet in the face. Slow blood [sic] down.” Or that my head should be ripped from my shoulders and shoved where the sun doesn’t shine?

It all started more than a year ago, during my European election campaign, and has continued since then. Back then they waded in one by one on a daily basis to have a go at me. And I am not talking about people sending offensive or below- the-belt posts or tweets. I am referring to direct threats and abuse – attacks, as far as I am concerned.

From a personal perspective, however thick-skinned you think you are, to get that kind of relentless bombardment over a year-long period is dreadful. It’s unquestionably harassment: it’s designed to strike fear in you, to intimidate you, to belittle you.

I am no different, however, from many children and adults the length and breadth of this country who are being subjected to vitriol on a daily basis for simply being themselves. All because there are some people out there who view having a go at others, or “trolling”, as a sport, a bit of craic and a way of eliciting a reaction. The fact that they have no understanding of the effect of their words is damning. It shows up an unpleasant side of human nature that has been allowed fester because of the lack of clear legislation in this area.

So why is there a distinction between online and offline abuse? Quite simply because there appears to be no specific legislative boundaries to prevent our online world from becoming a kind of hell.

Some people put cyberbullying down to advances in technology. Or the presence of people on social-media platforms. As if we shouldn’t be there. But what they fail to realise is that my online space is exactly that. Mine. If you don’t like me don’t follow me, don’t message me and don’t vote for me. You have that choice. But if you commit an illegal act we need a clear path of action.

It is now vital that social media companies, An Garda Síochána and other authorities are well versed in understanding, dealing with and combating these new types of cybercrime, which are invasive and omnipresent given the ease of contact with the victim. However, it is imperative that the abusers are curbed, not the technology. Legislation is just one solution. We have others.

A few months ago I wrote to Twitter and Facebook Ireland to ask those companies to publish their data on the number of complaints they receive, the length of time they take to investigate the issues and how many have been referred to the Garda for further action. I still await a response to my questions.

I feel strongly that these companies should not shirk their moral responsibilities to the very people whose engagement they rely on in order to generate billions of euro in profit annually. They owe each of us with an account that sort of protection and nothing less.

Of course I’d much rather be using my political office to keep people in their homes, get their entitlements, help them in every way I can and raise issues about matters affecting my constituency in Galway East. But to allow this online abuse continue as a feature in modern-day politics is wrong, and to expect any individual as a member of the Oireachtas to put up with this kind of deranged abuse is negligent. Because in any other job this would be regarded as a health-and-safety issue and employers would have to act accordingly in order to protect their employees and their wellbeing. But what is being done about it for public representatives? Nothing.

Consequently that is why I think: I’m a politician – all this goes with the territory. That’s not to say the level of abuse levelled at me is right or acceptable. However, I have to deal with it. I have to deal with the words and threats such as: “I’m going to blow your big f***ing Jew nose right off you.” And: “You might as well f*** off now while you are still breathing. Nothing better than to fill a rat’s mouth with lead.”

I have to deal with their effects, including that I might just feel hurt, upset or fearful. I have to deal with my father asking me to consider giving up a job I love because he didn’t invest in my education to see me being abused or threatened. I have to deal with my mother calling me to know if I’m okay when I’m at home alone because she’s worried about my security. My sisters and brothers wanting to defend me but feeling they have no right of reply because they want to avoid an online brawl and further ridicule of me.

So one might wonder then why some public representatives retire from their roles or move on to pastures anew? We talk about encouraging women into the political realm through gender quotas to try to increase participation. But who would want to put up with this as part of their job description?

This issue is not restricted to people in public life. Since coming forward with the details of my most recent threats I have, as before, received hundreds of supportive messages from people across the political and social spectrum.

So I think the time has come to fight back and work to protect others online who might be more vulnerable and unable to take such abuse. Robust laws designed to protect citizens online are crucial. At least then the perpetrators of abuse would have clear-cut deterrents and sanctions. Because if we don’t act now we will allow fear and intimidation take over and the brightest and best individuals will be lost to Irish politics forever. The country and its people deserve the best representation, no more and certainly no less.

Lorraine Higgins is a Labour senator