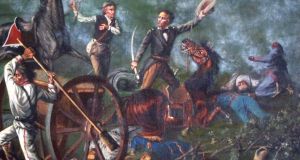 As our cargo ship was moving slowly along the canal from Galveston to Houston, Texas, we could see far ahead an immensely high obelisk. When we got nearer, this narrow column seemed to pierce the sky over this flat expanse.

Our captain asked the pilot what it was. “That’s the San Jacinto monument where the Texans beat the Mexicans,” the man replied, and added that it was one of the tallest masonry columns in the world.

This was the site of the battle in 1836 that established the Republic of Texas in territory that had previously been ruled by Mexico. For several decades, settlers from the United States had been moving into the region because they could buy land cheaply in this sparsely populated country

By 1835, they were the dominant presence in the vast territory and there were clashes with the Mexican government. They rebelled in what was called the Texas Revolution. They were joined by the Tejanos, Spanish-speaking inhabitants who didn’t like being ruled from far-away Mexico City.

Sam Houston, a dominant member of the new government, was given the task of forming a military force from the motley collection of volunteers from the ranches and farmlands. He was a stout-hearted personality whose Scots Irish ancestors came from Antrim.

The Mexican president Santa Anna led an army of some 6,000 soldiers into the territory to subdue the revolt. The Texans were seen as mutineers. When they were overwhelmed at the Alamo and a place called Goliad few prisoners were taken. Most of the wounded and any who surrendered were killed.

This caused outrage and great fear among the settlers scattered across the far-flung lands. They fled from their homes as the Mexican army advanced. Although Houston’s small army was being joined by more volunteers, he needed time to set up an effective, disciplined soldiery. He kept retreating, took every opportunity to drill his rag-tag force.

Santa Anna became brash and underestimated the tenacity of the Texans.

He split up his army and was leading 800 men when Houston’s force of about 900 men, 100 were said to be of Irish birth, confronted him at San Jacinto.

The two armies faced one another on a flat low-lying area between slow-moving rivers. The Mexicans built defensive breastworks out of brush and even saddles and were reinforced by 540 soldiers, although these were raw recruits who had marched for many hours.

Houston succeeded in giving Santa Anna the impression that the Texans were not in combat readiness. He had two fiddlers march up and down the ground between the armies playing Will You Come to the Bower, the love song by Thomas Moore. Santa Anna rested his troops.

Then Houston gave the order to charge and his soldiers, supported by two cannons, dashed forward, catching the Mexicans by surprise. It was a rout. After frenetic hand-to-hand fighting, the Mexicans fled from their campsite. The battle was over in 18 minutes. Mexicans who tried to escape along the rivers were shot down by Texan riflemen who shouted, “Remember the Alamo.”

Some 650 Mexicans were killed, 200 wounded and 300 taken prisoner. The Texan toll was a mere 11 killed and 30 wounded. Santa Anna escaped but was captured some days later. He signed the peace treaty that paved the way for Texas to become an independent country.

There are two footnotes of Irish interest. The battle was fought over the land owned by Peggy McCormick, a widowed woman who was born in Tipperary in 1788. With her two sons she had taken flight well before the battle but when she returned she found her land was littered with the bodies of the Mexican soldiers.

She demanded of Houston that he have the corpses removed. Suffused by the euphoria of victory, he tried to impress on her the significance of the battle and the land over which it had been fought. He refused her request.

“To the devil with your glorious history,” she flung at him as she turned away. She and her sons and some neighbours did their best to dispose of the very many bodies.

The other Irish footnote is Henry Arthur McArdle, who was born in Belfast in 1836, emigrated to the United States, studied art, became a painter and settled in Texas. He produced a very large painting of the battle, with the Texans obviously getting the upper hand and Sam Houston in heroic stance urging them on. It now hangs in the senate building in the state capital of Austin.

Sam Houston was first and third president of the Republic of Texas. When it became part of the United States in 1845, he was elected to the US Senate. In 1859 he won the election for governor of Texas. However, two years later he was forced out of office because of his opposition to Texas becoming involved in the American Civil War on the Confederate side.

He lost friends and was shunned but held to his beliefs to the end of his life, which came in 1863 while that appalling conflict was raging.