Netherlands did not sleepwalk into legalising cannabis

People know the clear difference between marijuana and medicinal cannabis 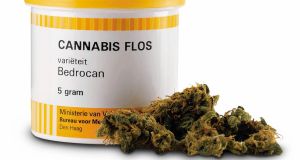 Medicinal marijuana is not regarded by doctors, hospitals or pharmacies as the thin end of any wedge likely to lead to abuse. Photograph: AP

While Ireland struggles with the idea of legalising medicinal cannabis, in the Netherlands, where marijuana is freely available for personal use, a small but vocal lobby is advocating the legalisation of other drugs as well, including cocaine, ecstacy, amphetamines, and even heroin.

That is not to suggest for one second that the Netherlands is necessarily right about drugs and Ireland is necessarily wrong. Nor is it to accept, however, that in a media-savvy and vocal country like Ireland, it is possible to “sleepwalk” an unsuspecting public into an outcome it never wanted.

As any guide book to the fleshpots of Amsterdam will tell you, a network of so-called “coffee shops” in the cities and large towns of the Netherlands means that cannabis in small amounts has been decriminalised since 1976.

In Dutch public policy terms, where the emphasis is more often than not on practicality, what that means, ironically, is that the drug cannabis is still illegal– but recreational consumption is tolerated, though it remains tightly regulated.

What that does not mean is that the adverse health effects of cannabis – such as dependence, impact on adolescent psychosocial development, or, more generally, on mental health – are strategically minimised for the purpose of “misinformation”, or are left untreated, for that matter.

The other thing it most certainly does not mean is that medicinal cannabis is regarded as in any way the same thing as the recreational drug, cannabis, or that the effects of the two are somehow conflated in the undiscriminating public mind. That is simply not the case.

Medicinal cannabis is regarded as a medicine, purely and simply. It is prescribed by your GP where appropriate, is available in five different types, and is collected in the usual way from your pharmacy on production of a mediwiet – meaning, pretty much, a medical prescription for “weed”.

Medicinal cannabis is regarded as a medicine, purely and simply. It is prescribed by your GP where appropriate

I had personal experience of this in the case of my late wife, Adrienne Cullen, who died of cancer last New Year’s Eve. Because of her unfortunate inability to handle opioid-based painkillers, she was prescribed medicinal cannabis by her medical consultant at the Netherlands Cancer Institute.

As it happened, it didn’t work for Adrienne and she simply dropped it, but the point is that it was not regarded as in any way outside the normal range of options available to her.

Nor – that I have seen or heard – is there any medical scepticism about the ability of medicinal cannabis to alleviate severe forms of epilepsy, for instance, such as the heartbreaking Dravet syndrome in infants or young children, which can cause multiple seizures daily.

The fact that Dravet is rare does not mean children and their parents should be left to suffer.

Nor is medicinal cannabis regarded by doctor, hospital, or pharmacy as the thin end of any wedge that is likely to lead to abuse. In fact, the public understanding of the difference between marijuana and medicinal cannabis is quite sophisticated.

As in the US, there is no need to approve the cannabis plant itself as a medicine. It contains more than 100 chemical compounds, known as cannabinoids, of which two are used in medical applications: tetrahydrocannabinol or “THC”, the psychoactive compound that gives the “high”, and cannabidiol or “CBD”.

It is the latter, CBD – which has no psychoactive effects whatsoever – that was approved by the Food and Drug Administration in the US last year for the treatment of Dravet syndrome. So the Netherlands is not alone. And, in my opinion, Ireland should follow.

In terms of the broader debate about drugs, the Cannabis Risk Alliance is quite right: you are more likely to read about cannabis and other drugs in the business pages of the newspapers.

That’s because the cost to the Dutch taxpayer of combating drugs is some €20 billion a year – a figure widely regarded as outrageous.

“At the moment, drugs are regulated, but by a mafia,” says retired lawyer Raimond Dufour, chairman of the Netherlands Drugs Policy Foundation. “What we propose is that government should make the rules, and that drugs should be regulated by law.”

Regulation would mean anyone over 18 could buy certain quantities of certain licensed drugs over a certain period. These would be produced by registered pharmacists at a reasonable price and the proceeds would be taxed.

Persuading users to give up would then become solely a medical issue, not one for policing – where a considerable budget would become free for rehabilitation.

In Ireland, this may well sound like a crackpot scheme – unlikely to be embraced by Minister for Health Simon Harris.

In the Netherlands, by contrast, a petition to this effect was signed a few years ago by former EU commissioner Frits Bolkestein; criminologist Prof Theo de Roos; and former health minister and deputy PM the late Els Borst.

It will never happen, however. It’s too radical.

“This is about starting a debate,” says Dufour. “Drugs are a problem in every country but nobody has a solution. So it would be interesting for our neighbours as well: to see if prohibition could be removed without plunging our country into addiction.”

Peter Cluskey is a journalist based in the Netherlands