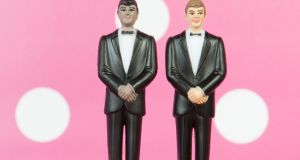 “The church’s fixation with homosexuality is destroying its credibility as a voice of reformed Christian witness.”

The Presbyterian Church has published a new book titled Considering Grace: Presbyterians and the Troubles which tells the moving story of 120 people’s experience of the recent conflict in the North.

However the church is battling with another set of troubles – namely the concern of rank-and-file Presbyterians who are dismayed by its evidently increasing conservatism, and the perception that it is heavy-handed in dealing with same-sex issues.

This has been a sore point in the church for several years, but matters came to a head when its general assembly voted in June 2018 to exclude same-sex couples from taking Communion, and also approved a move not to baptise children from a same-sex relationship.

This led to an outcry from the dwindling numbers of broader-minded Presbyterians, but the general assembly’s decision was not rescinded. Some people argue that the church is right to uphold its rulings on same-sex issues if members feel that this is biblically justified, though others strongly disagree with this.

What distresses many Presbyterians is the perceived coldness with which these rulings are implemented.

She immediately left Assembly Building in distress, and she and her colleagues swiftly returned to Scotland.

The decision taken by the Irish assembly was due to the Kirk (Church) of Scotland’s more liberal views on same-sex issues, and when an attempt was made at the Belfast general assembly in June this year to start a debate to consider rescinding the ban on moderator’s exchange visits, this motion was soundly defeated by 353 votes to 187.

One of the speakers, Rev Jonathan Boyd from Hyde Park and Lylehill in Co Antrim, told the assembly: “I don’t see how it does our denomination any good to keep revisiting an idea that has been so clearly rejected in four successive votes.” He added, with a reference to Brexit: “Surely not even Theresa May would go so far as to put the same issue to a fifth vote.”

The Presbyterians attracted more unwelcome headlines when they dismissed the former Union College professor Laurence Kirkpatrick, allegedly because of remarks he made on a live radio programme – a decision the church’s critics regarded as an attack on freedom of speech.

There was further trouble for the church when Queen’s University Belfast voted earlier this year to sever its long-standing links with Union College in Belfast, where a large number of young and not so young Presbyterians are trained for the ministry.

The breaking of the link resulted in the church facing an estimated £250,000 shortfall over the loss of QUB fees for the college.

Recently the church has created even more controversy by the decision to dismiss Steven Smyrl as an elder in Christ Church Sandymount, Dublin, because he is in a same-sex marriage. His position was investigated by a church commission, and after a lengthy process, he was dismissed as an elder.

Smyrl said: “It was so hurtful. To be told that I was just dismissed, and to have had every argument put to them over six months utterly ignored, it was really like a kick to the stomach.”

His dismissal has led to consistent criticism of the church by a lively number of letter-writers to the Belfast Telegraph, including Smyrl himself who stated recently: “I am constantly astonished by church leaders who with dogged determination to impose a narrow fundamentalist interpretation of scripture in matters of sexual morality, ignore the central Gospel message of ‘love thy neighbour’.”

He said the church had left him feeling “abused, demeaned and persecuted”. He further claimed that “the church’s fixation with homosexuality is destroying its credibility as a voice of reformed Christian witness”.

At this time of writing, the church has kept a stony silence on the issue, a position described as “astonishing “ by Belfast letter-writer Paula Curran to the local Telegraph.

Very few northern Presbyterian liberals are brave enough to speak out publicly, but everyone is watching for the outcome of this struggle for the soul of the church.

Meanwhile the parting words of outgoing moderator Dr Charles McMullan hang heavily over the current controversies. He said in June: “In a rapidly changing and secularising Ireland, we need to speak the truth in love and not be perceived to be closing the door to those who would see our churches as a cold place when we know that not to be the case.”

Most people in Ireland might decide for themselves, however, that a thawing of Presbyterianism from its perceived cold perspective is not likely to come any time soon.

Alf McCreary is a Belfast-based author and journalist