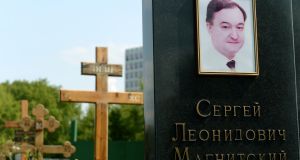 Sergei Magnitsky was a Russian lawyer who sacrificed his life at the age of 37 standing up to the corruption of the Putin regime. The way in which the Russian government tried to cover up his murder and exonerate the people involved became a symbol of impunity and kleptocracy worldwide. That is why Mr Magnitsky’s bold sacrifice crossed national borders and spoke to people everywhere.

The Magnitsky Acts, which impose visa sanctions and asset freezes on human rights violators, have become emblematic of fighting impunity and kleptocracy around the world. In the 21st century, many human rights abuses are committed for financial gain. Targeting those abusers’ money abroad and their travel is one of the most effective ways of creating consequences. There can be no impunity for generals in Myanmar who hunt down Rohingyas, for arms dealers who breach the weapons embargo against South Sudan, the rapists in the Central African Republic or the killers of the Saudi journalist Khashoggi.

That is why the idea of a Magnitsky Act started with a Russian atrocity but is now global in its scope. Human-rights violators in Saudi Arabia, Nicaragua, South Sudan, Burma, and many other countries are already being targeted with Magnitsky sanctions legislation in six countries: the US, Canada, UK, Estonia, Latvia and Lithuania.

We now need to take the next bold step. We need to establish an EU-wide Magnitsky Act. The European Parliament has already called for this many times and in 2014 even proposed visa bans and asset freezes against people responsible for the Magnitsky murder. Only a few member states took up this proposal.

The European Council failed to act, but now this initiative is finally gaining momentum. Over the summer, the Dutch government formulated a concrete proposal, which is now in consultation with all EU member states. This draft is exactly what is needed, the ability to apply global sanctions – with one glaring omission. The Dutch government has not yet named it a Magnitsky Act. Some would argue that Magnitsky’s name would somehow make it harder for a unanimous approval of the legislation. We don’t believe that our member states would veto a human rights Bill simply because of its name, but will adopt it because of their support to human rights worldwide. Whatever the negotiations will lead to, we will always call it the Magnitsky Act.

On Monday, December 10th, European ministers of foreign affairs will meet to discuss the Dutch proposal. Just one vote against would mean the end of this legislation. That is why parliamentarians and lawmakers from 18 EU member states urge our governments to strengthen the EU’s position as a beacon for human rights and international law worldwide.

We urge our governments to vote for this European Magnitsky Act that is global in scope. We urge them to honour Magnitsky in name and fight impunity worldwide. We cannot think of any better way to celebrate Human Rights Day and the 70th anniversary of the Universal Declaration of Human Rights this Monday. – Yours, etc,