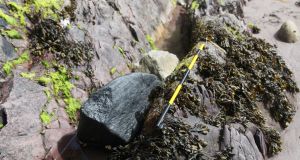 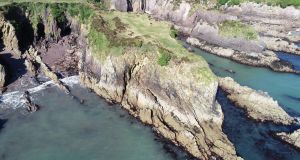 An aerial view of Smerwick Harbour in Co Kerry. Photograph: Courtesy of The Cherish Project

A number of summers ago, my father Tom Finn and I scrambled down a cliff – we called it abseiling – at Smerwick Harbour in Co Kerry in search of gold. We were trying to understand why a site, better known for the massacre of 600 troops by Elizabethan forces in November 1580, was called Dún an Óir, or the Fortress of the Gold.

We struck it lucky. You might even say we struck gold, or a version of it, because the sandy coves beneath the remains of an ancient promontory fort were dotted with a glistering black ore that matched the description of a long-lost ship’s cargo.

We were looking for traces of the “black gold” that had reportedly washed ashore after the Emanuel foundered off the coast of west Kerry in 1578.

The ship had been on its way back from the Canadian Arctic with a hold full of “precious” ore mined off Baffin Island when storms drove it into Smerwick Harbour “withowte masts, sailes, boate, ancre or any other convenient furniture”, to quote one contemporary source.

One story has it that the captain, Richard Newton, sought help, and 100 tons of his cargo were transferred to a fort owned by Dingle merchant Piers Rice on the Dún an Óir headland.

Another account mentions a dispute over ownership of the cargo between the captain and Gerald Fitzgerald, Earl of Desmond.

In any case, it wasn’t long before the “gold” was found to be worthless.

It had been discovered in 1576 by English explorer Sir Martin Frobisher, who initially set out for the New World to discover the Northwest Passage, a new route to the Pacific Ocean.

A navigational error led him ashore at a bay (now called Frobisher Bay) where he found a specimen of ore which would later lead to Canada’s first gold rush. Mining expeditions followed and more than 1,000 tons were brought back to England before the ore was discovered to have no value.

It seems Capt Newton never reclaimed his cargo, worthless or not. His ship never sailed again either. One of the last sightings was in June 1580, when government official Nicholas White noted that he had seen the hollow “carcas and stones” of a ship which “hadpened to press upon the sandes”.

The story of gold was soon overshadowed by the events of November 1580 with the slaughter of 600 Spanish, Italian and Basque troops who landed at Smerwick to fight the English during the Second Desmond Rebellion.

The siege is commemorated at the site and, in recent years, the story of the mined ore that most likely gave Dún an Óir its name is better known thanks to Prof Donald Hogarth of the University of Ottawa.

In 1987, he found black cobbles on the inlets around Smerwick that bore striking similarities to the black ore – or metaultrabasite – mined 400 years ago on Baffin Island. Radiometric dating showed it to be 1,900 million years old, much older than any known rock in Ireland.

We set out in the early 2000s, in his footsteps, to see if the Emanuel was still offering up “Frobisher’s gold”. Our samples were authenticated by the National Museum of Ireland which also keeps a sample, donated by Donal O’Halloran of Cork.

“The specimen,” the museum’s website muses, “represents many things: The ancient Earth and the vastness of geological time; man’s greed, folly, and misfortune; the ability of scientific study to add to our knowledge of the past.”

There are samples at the more local Músaem Chorca Dhuibhne in Baile an Fheirtéaraigh (Ballyferriter) too and, as recently as June 2019, Edward Pollard, maritime archaeologist with the Discovery Programme, identified six pieces on the southern side of Dún an Óir.

As part of the Cherish Project, Dr Pollard and his colleagues have been assessing the impact of climate and sea-level change on cultural heritage in the area. That is particularly urgent at Dún an Óir, where coastal erosion has made access to the fort and its surrounding beaches dangerous.

They are monitoring a cliff section in the Gortnagan area which could be the “field of the heads” (Gort na gCeann), the burial site referred to in the massacre, but it has not been confirmed as a grave.

The Geological Survey of Ireland has also mapped the local seabed using a multibeam echosounder. A 20th-century shipwreck has been identified but divers have yet to confirm if some of the more mysterious features, seen from the survey vessel, are natural or possibly one of the 20 or so older shipwrecks known to be around Smerwick Harbour.

Could the whereabouts of the Emanuel finally be revealed?

It’s too early to say but the Cherish Project hopes to return to Dún an Óir next year.

It looks as if this special place has not yet yielded all of its treasures.