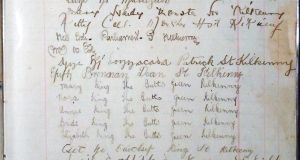 The mottled green and red ledger has faded to brown around the edges over the last hundred years. More than half the pages contain records of milk sales from the Danville Dairy outside Kilkenny city, neatly and painstakingly recorded in columns over the decades.

But the first 32 pages tell a different story, a story of women rising and taking their place in Irish political life. The old ledger I’m holding in my hand contains the forgotten names of the Irishwomen who marched in my home city of Kilkenny on Lá na mBan 1918, in protest against conscription.

With Britain desperate for troops by the spring of 1918, the House of Commons passed the Military Services Bill in April. The commander in chief of the home forces, Lord French, was determined to implement conscription in Ireland. But the campaign against it united the Irish Parliamentary Party, Sinn Féin, the church, the trade unions, and, significantly, women’s organisations, particularly Cumann na mBan. Lá na mBan was the culmination of their campaign, with marches nationwide on June 9th.

Eibhlín ní Chróinín, Sráid Ard, is the fourth signatory. She was from the West Cork Gaeltacht and had come to Kilkenny to teach Irish, probably at the request of the Gaelic League. As she spoke no English, the story goes that a piece of the tweed she would be wearing was sent in advance so that there would be no mistaking her. She was one of 1,015 women who signed the pledge at the Tholsel, or town hall, after the march.

“Because the enforcement of conscription on any people without their consent is tyranny we are resolved to resist the conscription of Irishmen”, it reads, in both English and Irish.

“We will not fill the places of men deprived of their work through refusing the enforcement of military service.”

Brennans and Bollards, Dowlings and Dunnes, the surnames in the ledger are a snapshot of Kilkenny life 100 years ago

The Kilkenny Journal reported on the march in an approving, if slightly patronising tone the following week, describing it as “an eloquent manifestation of the women of Kilkenny and their determination to cooperate with the manhood in their resistance to the infamous conscription proposals”.

It particularly congratulated Cumann na mBan on the smooth organisation of the event, remarking that “they carried out their work in a manner that left no room for adverse comment by even the most captious critic”.

Brennans and Bollards, Dowlings and Dunnes, the surnames in the ledger are a snapshot of Kilkenny life one hundred years ago.

They include many prominent nationalist families such as the De Loughrys and the Treacys. Orla Murphy’s grandmother Elizabeth was married to Tom Treacy, who was captain of the Irish Volunteers in Kilkenny and had been interned after the Rising. At the time of the march he was on the run, after many prominent Sinn Féin members were arrested as part of the so-called “German Plot”, a conspiracy alleged by the British authorities.

“Looking back on it, they were very strong and resilient women,” says Murphy. “My grandmother wasn’t a member of Cumann na mBan herself, but I think she made a great contribution, because she was the rock of the family and the one earning a living while he was away”.

Elizabeth was a milliner who had previously worked in the Monster House, a famous Kilkenny department store, and set up her own business with her husband when he lost his job after internment. Some of her best customers were the wives of British army officers stationed at Kilkenny Barracks. Milliners and draper’s assistants were very much involved in the march, with the Kilkenny Journal noting the role of their trade union and others in its organisation. Nuns from the Loreto convent, including Sisters Syncletica, Thaddeus and Honoria also signed their names, as did three members of the Stallard family from Danville House, where the ledger was eventually discovered.

Widespread opposition meant that conscription was never enforced in Ireland, and the campaign against it helped to strengthen Sinn Féin

For Ann Tierney, one of volunteer librarians at Kilkenny Archaeological Society, it’s a fascinating treasure and a valuable record. “I think this was probably the first big non-religious public expression by women as a group in this city, and that is something to celebrate”.

Widespread opposition meant that conscription was never enforced in Ireland, and the campaign against it helped to strengthen Sinn Féin, leading to sweeping political changes in the 1918 general election, in which some of the women who signed the pledge on Lá na mBan finally got to vote.

The Kilkenny Archaeological Society is tracing the signatories, using the 1911 census and other local records, and is encouraging their relatives to come forward to tell or research their stories. The ledger will be on view at a launch of the project at Rothe House on Thursday, June 7th, at 8pm.

1 Coronavirus: People in close contact with Belfast patient identified
2 Murder in a crowded house: The full story of the Patricia O’Connor trial
3 Britain is uncomfortable because Ireland has the upper hand for the first time
4 Baby names 2019: Emily and Jack retain top spots
5 ‘I had to tell my mum not to say that as it means something else’
Real news has value SUBSCRIBE