Kathy Sheridan: Friday is about so much more than abortion

The Government's draft legislation on abortion allows for termination of pregnancy up to 12 weeks, but how did they come to this decision? 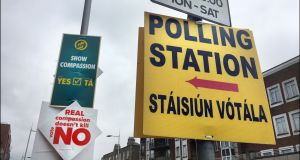 Polling station signage in Rathmines: Up to recently, women’s stories were buried in our society as an unspeakable, amorphous blob, one woman indistinguishable from the other, reduced to “social abortions” or “issues”. Photograph: Bryan O’Brien

After a long drive back from a west of Ireland town, a few young “Together for Yes” canvassers sit glassy-eyed with exhaustion but high on emotion. Not to mention limp with relief the anticipated gauntlet of abuse in famously No territory had not materialised. But everything is relative. “I only heard ‘baby murderer’ twice,” a 25-year-old says wryly.

In recent months, many of these emissaries of the so-called snowflake generation have encountered scenes of another Ireland. Up several flights of stairs, one group found a barely coherent mother with jaundiced eyes shielding her stupefied young son who lay over a sofa, his mouth drooling white foam. By close of voting on Friday, some will have glimpsed fear, malice and deprivation across the State that will linger in the memory. In this sense, the wildly belated, unspecified “we can do better” refrain from the No campaign rings true, if not perhaps in the way they imagine.

In a can-do spirit, David Begg, former general secretary of the Ictu and No voter, has particularly noted one conclusion of the Oireachtas Committee on the Eighth – “that the majority of terminations are for socio-economic reasons that are unrelated to foetal abnormalities or to rape” . Those instances could be dealt with, he contends, if the Eighth Amendment were backed up by legislation, “as was intended in 1983, and a model of social protection to obviate the socio-economic need for abortion”.

Yes, imagine if that formidable energy, advocacy, imagination, articulacy and cash pile of the No campaign leaders had been channelled into a single cause such as the mental health services, elimination of child poverty or violence against women over the past 35 years? Imagine if they had actually supported change in the Eighth – as David Begg now suggests – to deal with such issues as rape, fatal foetal abnormality and “to remove any ambiguity about saving the life of the mother as a priority”?

Instead, the olive branch on the No side is to characterise the majority as “social abortions”. So who are these social abortion renegades? Well, we know from the same Oireachtas committee evidence that nearly half those from Ireland accessing abortion in the UK are already mothers and that for the vast majority a contraceptive method has failed. The great majority access abortion at nine weeks and under.

Up to recently, those women’s stories were buried in our society as an unspeakable, amorphous blob, one woman indistinguishable from the other, reduced to “social abortions” or “issues”. Only six years ago, when this paper published ground-breaking pages of Irish women’s experiences of abortion, my enduring memory is of the women’s raw terror of revealing their names to me, though solely for verification, along with the repeated assurances and face-to-face meetings required before publication. There was the woman who wrote about being a girl of 16 and realising, “I would not just be a young single mother dependent on the welfare state, but would have to cope with him being a drug-taking, sometimes violent father”.

The woman in a savagely violent relationship who after discovering she was pregnant, found the courage to escape with her severely disabled child – a decision that left her jobless and homeless – and who began her email as follows: “I staunchly disagreed with abortion prior to having my own and was judgmental of those who chose it as an option, something that I wholly regret now . . .”

There was the woman who had to give up her job after a nervous breakdown and was still on anti-depressants when she became pregnant. The woman with a condition that prevented her taking the contraceptive pill, who already had three small children and had suffered multiple miscarriages. The 20-year-old student’s lonely, painful account of inducing her own abortion, with pills ordered online – a revelation for many readers then.

Another revelation was the number of deeply shocking accounts of couples forced to “travel” due to a fatal foetal abnormality in a longed-for baby. Out of that cohort came four remarkably brave women – Amanda Mellet, Arlette Lyons, Ruth Bowie and Jenny McDonald – who made social history of a kind by agreeing to be named and photographed on the front of The Irish Times.

All these women will come to mind when I vote. I will also think of the canvassers who ran the gauntlet for Yes. Abortion is grim; it requires grit to walk up to a stranger’s door to talk about it. It also requires respect, listening and nuance to understand why this is about so much more than abortion; why so many women are weary of being shamed into silence, of being left to dangle in that infinitesimal constitutional space between the risk to our lives “as distinct from” our health, suspended in that space unique to girls and women where there is a “lack of evidence that mental health is health”, in the words of Senator Rónán Mullen.

Yes, we can do better. All of us. Friday is only the start.