Kathy Sheridan: Battle over life of Alfie Evans a lesson for us all 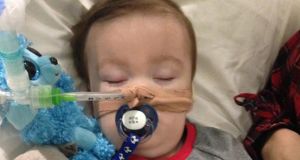 Anyone who has participated in the decision to move a loved one from acute hospital treatment to hospice care will have an inkling of the hellish dilemma faced by the parents of Alfie Evans, the 23-month-old Liverpool boy who was finally removed from life support last week.

After months, perhaps years of plastered-on positivity, relentless advocacy and exhaustive vigilance, it can feel like craven surrender, even betrayal.

How do you gather the strength and wisdom to agree on a loved one’s behalf that it is time to let go? In a culture where desperately sick people are described as “warriors”, what does that say of you – their advocate and protector – for giving in, for climbing wordlessly into that ambulance, for embarking on that via dolorosa with them without one final plea or howl of protest?

And how much more crucifying must that journey be when the patient is a child.

This is the context of the ferocious battle waged by little Alfie Evans’s distraught parents to keep him on life support in Liverpool’s Alder Hey hospital; the context in which a reckless mob of self-styled Christians, pro-life and far-right websites and their armies of bigoted, ignorant trolls, many of them American, impelled itself to the centre of this profoundly vulnerable, tragic family’s life.

For more than a year, Alder Hey had kept the little boy alive by artificial ventilator.

The progressive destruction of his brain was confirmed by scans showing white matter “almost identical to water and cerebrospinal fluid”. No-one disputed that the damage was “catastrophic and untreatable”.

Despite the theatrical headlines and the pope’s misguided attention, there was never any experimental treatment on offer in a Vatican hospital, or anywhere

The hospital’s application to the courts to turn off Alfie’s life support and remove his feeding tube was opposed by his distraught parents Tom Evans and Kate James, and saw them pitted against a far-reaching principle of English law – the Children Act 1989, which provides that the welfare of the child is the paramount consideration.

The couple instructed six different legal teams as well as various eminent, independent doctors from both Britain and abroad to try to stop the hospital’s approach and seek treatment in Italy. All were agreed that Alfie was in a semi-vegetative state and incurable. The only dispute was over how long he should be artificially kept alive.

Despite the theatrical headlines and the pope’s misguided attention, there was never any experimental treatment on offer in a Vatican hospital, or anywhere. But the court heard that if the Vatican hospital did not achieve its mysterious purpose, the plan was to fly the terminally ill child to Munich, where he would be subjected to a tracheostomy and a gastrostomy and kept in the Paediatric Intensive Care Unit for 14 days while the parents were trained to manage a home ventilation system.

Under the Act, the judge had only one question to answer: “Where do this child’s best interests lie?”

He ruled that the European flights would not be in Alfie’s best interests and an end-of-life plan was put in place. That should have been where it rested.

The mob had only one answer.

They tried to ram the doors of the hospital, threatened to cut off the power (while children were on the operating tables), abused and intimidated staff, sent death threats to doctors, called the judge a murderer.

Then like a deus ex machina, the Christian Legal Centre (CLC) – a sister body to Christian Concern , “which seeks to introduce a Christian voice into law, the media and government” – entered the fray.

American pro-life activists got down and dirty, including numerous Catholic and evangelical clerics tweeting their rather un-Christian anger and ignorant abuse

Were the consequences not so tragic, their behaviour would be the stuff of farce. Their legal “advice”caused a near riot with police. Summonses were purportedly served on hospital doctors, charging them with conspiracy to murder.

Whose voices were the mob listening to?

Was it Pope Francis, who figured large in media, asking that “the suffering of his parents may be heard and that their desire to seek new forms of treatment may be granted”? His Italian Cardinal, Pietro Parolin, who lamented “on behalf of the pope and the Holy See”, the “refusal to allow Alfie be brought to Italy”.

American pro-life activists got down and dirty, including numerous Catholic and evangelical clerics tweeting their rather un-Christian anger and ignorant abuse. National Right to Life, a Washington DC site, tweeted that British law could be in violation of the UN’s Convention on the Rights of the Child. It also tweeted photographs of supporters in various US states holding “We stand with Ireland – Save the Eighth” posters. The Alabama-based global Catholic network, EWTN, attempted to get #AlfieEvans trending.

There were no limits in the vile exploitation by religious actors of Alfie Evans’s short and tragic life. An American Catholic, Christine Broesamle, arranged for foreign doctors to visit Alder Hey posing as friends of the family, one of whom falsely claimed to have seen Alfie’s medical records and, on that basis, had pronounced him “fit to fly” to Rome.

The cultural abyss between American and European legal and medical systems was never more apparent.

Let it be another warning to the State – and anyone who cares about democracy – to wake up to research in recent days by journalist Gavin Sheridan, showing that US-based Catholic activists have been engaged by pro-life groups here and are using Facebook to interfere in our referendum on the Eighth Amendment.

1 Ireland among countries urged to consider reinstating Covid-19 restrictions
2 ‘I’ve been sleeping with my girlfriend’s sister. I need help. What do I do?’
3 Joe Biden names Kamala Harris as running mate for US election
4 New crime fiction: Shot in the arm for the hackneyed serial killer yarn
5 Russia set to begin Covid-19 vaccinations within weeks
Real news has value SUBSCRIBE